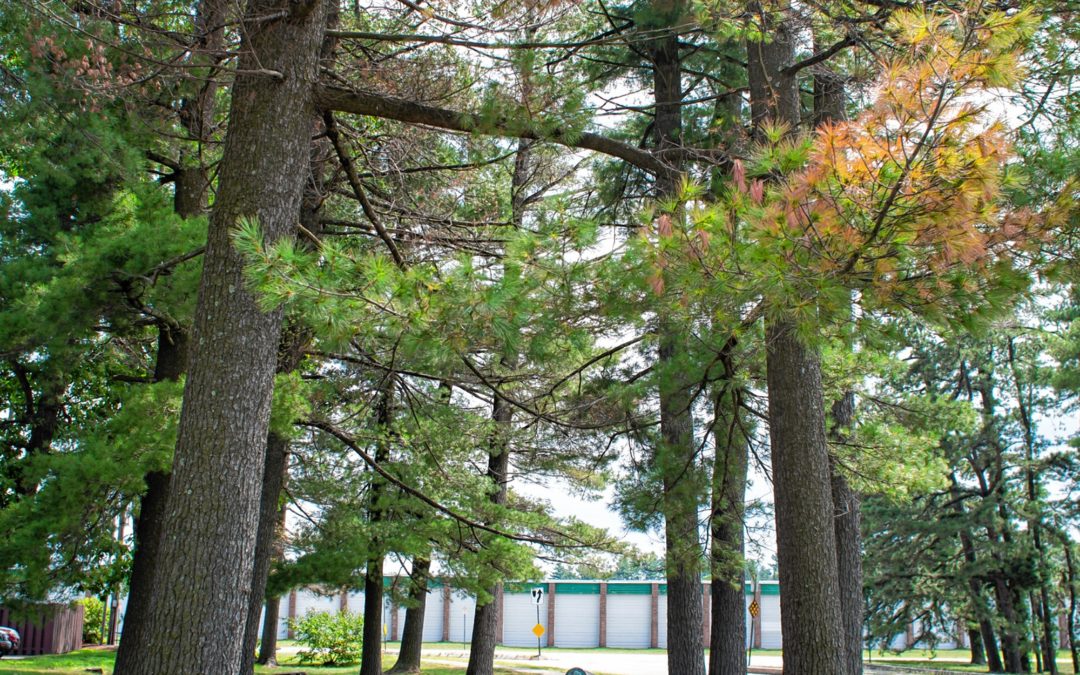 A poorly understood disease affecting white pines is forcing Concord to cut virtually all the trees off a small parcel of land on Loudon Road, reflecting growing difficulties with urban trees like that seen last year when the city had to remove the red pines from Rollins Park.

“There are a bunch of small parcels that the city owns that have these almost monocultures on them. When a problem hits, it affects all of (the parcel). In the past five years this has become more of an issue because of the new pests that have arrived,” said Ryan Rambeau, tree supervisor for the city.

The parcel  is at the intersection of Loudon Road and Blodgett Road, between a Wendy’s restaurant and a Bangor Savings Bank branch. It contains a granite monument saying “In memory of veterans of all wars”, two benches, a flagpole and a canon.

It has 22 white pine trees and a few mixed hardwoods.

“I’ve been looking at this area, watching some of the pines on the edges decline for the past two years. I was hoping they might bounce back, but they continue to decline. I think that they have a type of needle blight, which probably set in 3 or 4 years ago when we had some wet springs,” he said.

All the pines will be removed, as is recommended when white pine needle blight is found in a woodlot.

The city is gathering bids from contractors who can remove the trees with a crane, a necessity because the number of buildings nearby. Work should begin in roughly a month, said Jim Major, highways superintendent with the city, and take about two days.

The work will require closing off Blodgett Road, a connector between Loudon Road and Pembroke Road, and may affect eastbound traffic on Loudon Road for a time.

After that, the city will evaluate the soils – which, like most of that portion of Concord, are sandy – and work with the conservation commission to replant the area with some trees and other vegetation, said Major.

White pine needle blight, also called white pine needle damage, is a complex mix of problems that has has been seen in eastern white pines throughout the region since about 2010. Researchers at the New Hampshire Agricultural Experiment Station at UNH are studying the disease, which causes needles to become yellow and fall off in mid-summer, depriving trees of sustenance and eventually killing them.

Unlike other species-specific tree diseases that have recently arrived in this country threatening it is not carried by one insect such as hemlock wooly adelgid, emerald ash borer or Asian longhorn beetle. Instead, it appears to be caused by interaction among four types of fungus that have long been in the region and have been made stronger by the trend of warmer and wetter springs.

Compounding the problem is the monoculture aspect of the site, which is covered almost entirely by one species of tree that are all about the same age.  This is common in towns cities when plantings are done, but leaves the site vulnerable to a single disease, as was seen in Rollins Park when the arrival of red pine scale, a small insect, forced many of that park’s trees to be removed.

Concord appears to have acquired this parcel as a sort of leftover when Loudon Road was widened from two lanes to four lanes a half-century ago. It contains a park bench and a cannon, but little else.

“We were hoping we could give it back to Wendy’s or the bank, but they didn’t want it,” joked Major.