At UNH, studying how traffic lights can talk to cars 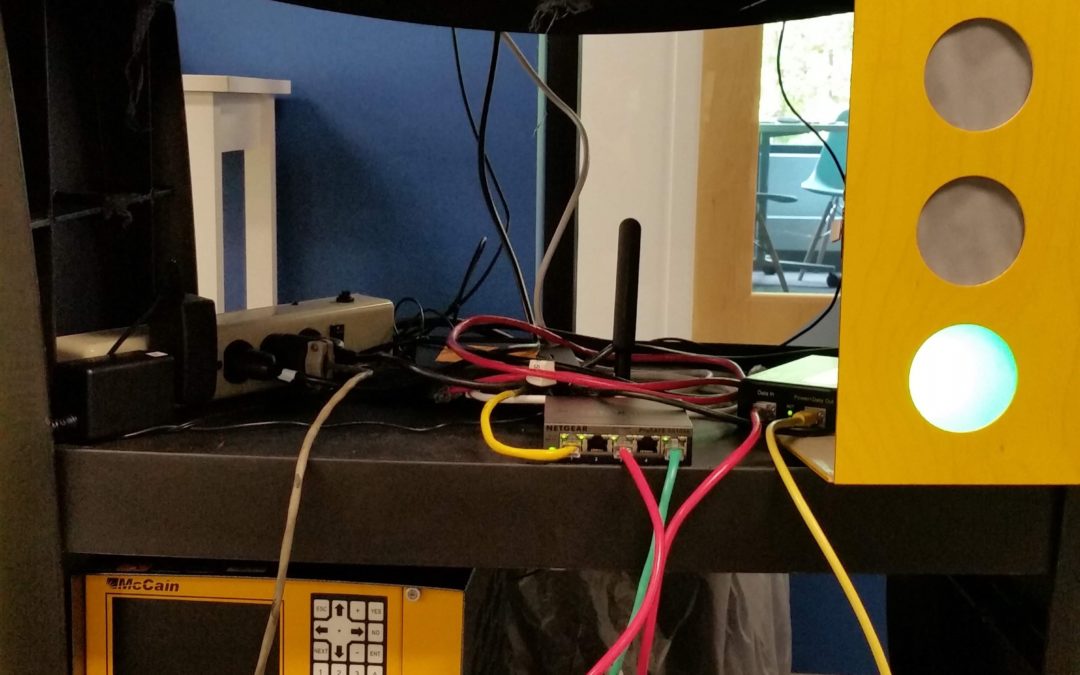 The testbed for a "stoplight" with controller and DSRC radio (bottom shelf) at the UNH Connectivity Research Center. (Photo: Christina Dube)

When I was a kid, futuristic visions of self-driving cars always assumed they would need all sorts of wires and gizmos installed in the roadway to give the car information about where it was, what it was doing, and where it should go. We didn’t think computers and sensors would get so powerful that cars could carry everything they needed, which is the model that most companies are pursuing.

But the idea of outside technology talking to our cars and helping them out hasn’t gone away. An interesting example of this infrastructure-to-vehicle technology will be demonstrated on Tuesday in Durham by the UNH Connectivity Research Center. That group is studying ways that traffic lights can talk to cars, either through DSRC (dedicated short-range communication) or through the LTE cell-phone network.

“The traffic light would communicate to the car pretty much everything about the intersection your’re approaching – how many lanes it has, if there’s a left-turning lane, the state of the lanes, and how long the light will be in the state it’s in,” said Christina Dube, research project manager for the Connectivity Research Center. The applications are obvious, not just for helping future autonomous cars but for interacting with current technology – maybe activating brakes if the light is green and you aren’t slowing down, or letting a hybrid car know it can shut the engine because the light will stay red for another minute. It could also alert drivers if there’s an accident, both for safety reasons and help them avoid the resulting traffic.

The technology is set to be installed later this year in signals at three intersections on Silver Street in Dover for some real-world tests.

This work is being sponsored by the New Hampshire Department of Transportation, the Federal Highway Administration, and the city of Dover, with funding from an initiative called the Signal Phasing and Timing (SPaT) Challenge issued by the American Association of State Highway and Transportation Officials. SPaT (love that acronym) is trying to fill a technology gap – driver automation and vehicle-to-vehicle connectivity features are growing just fine but there’s no market or government mandate to push vehicle-to-infrastructure development. Dover is said to be the first place in New England to take up thus challenge.

Funding for this comes from the Federal Highway Administration through a  program called STIC or State Transportation Innovation Council. The total budget is $83,000 of which $66,400 came from the feds and the rest is a match, mostly in the form of research time and labor from UNH.

I must admit I knew nothing about the Connectivity Research Center at UNH before an announcement about the demo. The center does research on  wired and wireless network engineering, cyber security, and data communication, and is sort of a smaller sibling to the better-known InterOperability Lab. It seems a great example of the sort of funky research labs that can exist at a big university, mushing together academics and industry folk to create interesting stuff.