Why doesn’t aquaponics (growing plants and fish at the same time) work better? 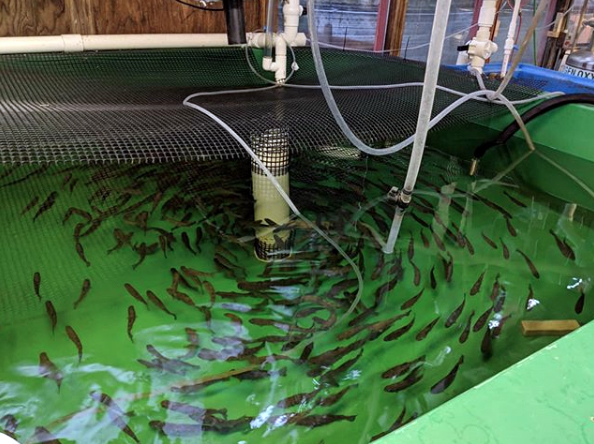 Years ago I helped a friend of a friend with a backyard aquaponics system – in which plants are grown in water rather than soil and fish live in the water. I was entranced.

It seemed almost magical, with the poop from the fish feeding the plants to create both vegetables and animal protein in one small space. I figured such systems would soon start replacing gardens among the geekier subsets of the back-to-the-land crowd, becoming a real part of the local food movement.

I’m not sure what happened to the system I saw, but I know that aquaponics has never caught on even though the related field of aquaculture, which grows fish or shellfish without the plants, is doing pretty well.

A new project at UNH wants to change that, and maybe turn this fish-and-veggies idea into something that can support a real business in New England.

How? They’re going to science the heck out of it.

“I’m here as a fancy plumber,” said Todd Guerdat, an assistant professor of agricultural engineering, who is leading the project at UNH’s Kingman Research Farm in Madbury. He said seven graduate students are involved in the research at the moment: “They’re the facility managers, they understand the biology, physics, engineering, physiology, and all the other factors that go into it.”

In New Hampshire as in many places, he said, aquaponics systems are built on rules of thumb, at best. If a system fails or if costs go through the roof, it’s not clear why because there’s limited understanding of what’s actually going on with inputs like fish food and outputs like the harvest and the waste.

“The tough part of aquaponics, as opposed to poultry or dairy farming, is that we don’t have nutrient balances established,” Guerdat said. “We don’t have a functional model that says: this is how you can do it … and make money. Send your kids to college.”

Even when systems work they are very limited, he said. The most popular model used by backyard do-it-yourselfers “is based off of trial and error. Everyone copies and pastes that, but the man who developed it admits that it can’t scale up or down.”

Fueled by what could eventually be close to $1 million in grants from the U.S. Department of Agriculture and New Hampshire Sea Grant, the program has built three aquaponics greenhouses where they will be testing “at farm scale” aquaponics models developed over the past year and a half in a small greenhouse on the Durham campus.

“I just met with a group of engineering students specifically examining how much water these systems need, and determine the inputs of water, energy, nutrients,” he said.

Here’s a big surprise I got from talking to Guerdat: Fish poop is a problem as much as it is a resource. The water in which the UNH fish are swimming gets treated, just as it is at Concord’s wastewater plant, before it gets used, and for the same reason I don’t dump raw manure around my green bean plants as I’m preparing to harvest them.

“People say, ‘Oh, you use the poop to fertilize your plants’ – but that waste is a food source for microbes that are food safety concerns,” Guerdat said. “We never send untreated water to plants. Never.”

Guerdat says I’m not alone in thinking that fish poop is a magic aquaponics fertilizer.

“When people say, ‘I’m doing this at home but it’s (not working). What am I doing wrong?’ My first answer is usually, ‘Remove the poop,’” he said.

Another error, says Guerdat, is that the laymen’s idea of aquaponics as an all-in-one-place system is flawed because plants and fish have very different preferences. On a commercial scale, that doesn’t really work.

“Fish don’t need light and don’t want the big temperature fluctuations you get in a greenhouse. The goal is to take the fish out of the greenhouse, and have a separate greenhouse and fish farm that are connected virtually or physically through pipes in the ground,” he said.

Already, Guerdat said, the UNH greenhouses could probably break even economically, growing lettuce and harvesting fish year round, and using treated fish waste as fertilizer for strawberries during their growing season. Test runs in August hit a production goal, growing Boston butterhead lettuce in 35 days from seed to harvest, with an average head weight of 150 grams using no outside fertilizer.

Nobody thinks New Hampshire will ever feed itself with aquaponics farms, of course. But if we approach the technology intelligently, it seems reasonable to think that it could become a part of the mix that we’ll need to ensure that we have a good, healthy mix of food available in be turbulent coming decades.