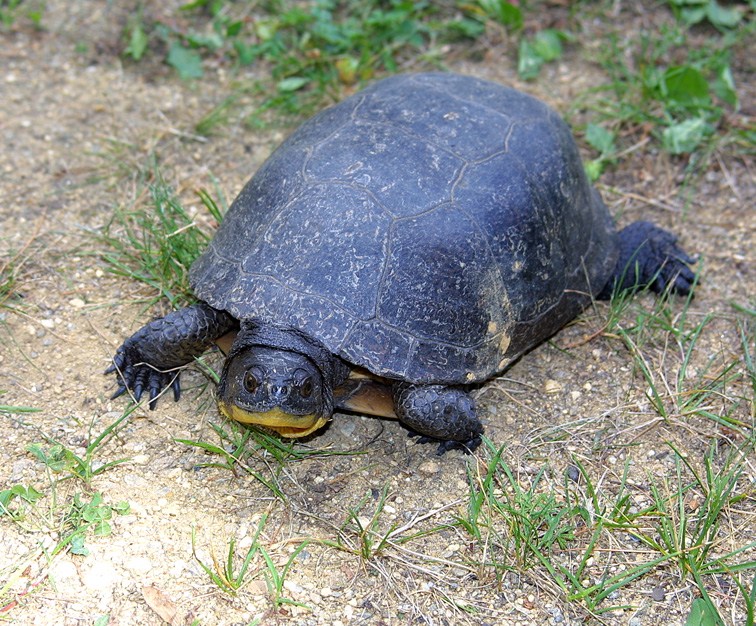 From NH Fish and Game: Late summer and early fall is the time when eggs laid by New Hampshire turtles in the spring begin to hatch and future generations emerge from their upland nest chambers. With luck and excellent camouflage, these tiny hatchlings will make it to the safety of a pond, stream, or wetland. In an effort to move ahead with conservation actions while turtle populations overwinter, Fish and Game biologists have been working with local, state and federal partners, landowners, and land trusts to identify areas within high-priority turtle populations where nesting habitat can be created to decrease the likelihood of females crossing roads or entering residential developments.

“The location of a suitable nesting area is crucial for successful nesting and hatchling survival,” said New Hampshire Fish and Game Department Wildlife Biologist Josh Megyesy. “For some sites, creating nesting areas requires cutting trees to expose the ground to full sunlight and then bringing in sand, while others just need some vegetation cut back and soils scarified with heavy equipment.”

This kind of habitat management in sensitive turtle areas is done during the winter months when turtles are hibernating in the water and the ground is frozen. Some of this work has already been initiated in key areas in the Granite State, but more will continue this coming winter and beyond. The Fish and Game Department’s Nongame and Endangered Wildlife Program has been monitoring populations of several rare species of turtles throughout New Hampshire, including state-endangered Blanding’s turtles. Through mark-recapture methods and the use of radio telemetry to track individual turtles, biologists have been able to better understand how these turtles use their diverse wetland and upland habitats.

“For two years we followed this one particular female Blanding’s turtle,” explained Megyesy. “The first year we tracked her from wetland to wetland, and eventually after crossing a road she then nested in a residential environment. The second year it was amazing to watch her follow almost the exact path she had taken the previous year, and nest again on the same property. It became clear that good nesting habitat was lacking within the core of their territory and something needed to be done.”

Other females from other populations followed a similar pattern, each time increasing the chances of road mortality. These turtles require sandy, well-drained areas with full sun for nesting and successful incubation. Female turtles dig a nest chamber, deposit eggs, cover the eggs with soil and then depart, leaving the embryos and future young turtles to fend for themselves.

“For rare turtle populations to persist in New Hampshire, it is essential that adult female survival rates are high and that new young individuals are added to the populations,” Megyesy continued. “Turtles have coped with various threats by being able to live for a very long time, with some local species of turtles possibly exceeding 70 years! But low survival of young isn’t the only reason why turtles must live a long time − female turtles of some species may not be capable of reproducing until they are at least 15 years old.”

Many of the monitoring and conservation actions for rare turtles in New Hampshire are made possible by federal programs, such as State Wildlife Grants administered by the U.S. Fish and Wildlife Service and funds from the U.S. Fish and Wildlife Service New England Field Office, along with matching state funding from the NH Conservation License Plate funds and individual donations to the Nongame and Endangered Wildlife Program. Biologists are also working with the US Department of Agriculture’s Natural Resources Conservation Service to protect turtles and their habitats occurring on private working lands in the state.

To learn more about the Department’s involvement in the regional Blanding’s turtle conservation efforts, visit http://www.blandingsturtle.org. Learn more about New Hampshire’s turtles at https://wildlife.state.nh.us/nongame/turtles.html and the New Hampshire Fish and Game Department’s Nongame and Endangered Wildlife Program, supported by federal and state grants and individual donations, at http://www.wildnh.com/nongame.