Salmon may not be coming back, but herring sure are 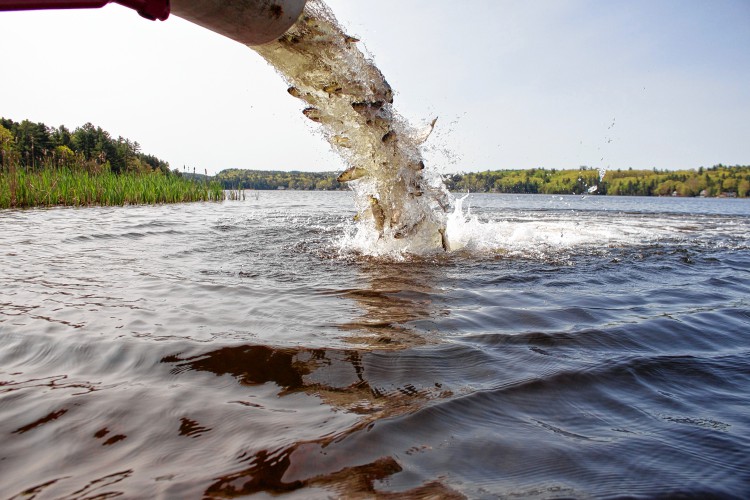 Herring – hundreds of them – are dumped into Northwood Lake in 2016. ELODIE REED—Monitor staff

Let’s face it: Salmon are never coming back to the Merrimack River. But don’t despair, you fans of fish with weird life cycles: Herring are doing so well that we might be seeing them in Concord again.

Plus, shad aren’t doing too badly, either. And American eels, which can grow to an alarming 3 feet long, are still around despite the fact that they do the whole live-in-both-ocean-and-river thing backwards.

“I used to be pessimistic but I’m optimistic now,” is how it is put by Matt Carpenter, a fisheries biologist with New Hampshire Fish and Game. “I’ve seen a lot of innovations with fish passages, interesting improvements that seem to be working, and better understanding. It seems more than ever that it’s possible to have healthy runs of fish, even with dams.”

We’re talking about anadromous fish species here, the ones that live most of their life in the ocean but swim into rivers to lay eggs – unless you’re an eel, then you do it the other way around. These species have been struggling in the Northeast even since humans starting blocking rivers with dams two centuries ago.

On the Merrimack River, fish returning to spawn have to go upstream past hydropower dams in Lawrence and Lowell, Mass., and then Manchester and Hooksett before they can get to Concord, and then they have to get past Garvin Falls Dam if they want to keep going north. Plus, there are too many small dams to count that block travels up into various tributaries, the waters where they’d really like to spawn.

Those first three hydro dams now have fish ladders or fish elevators to help species get past them but they’re not always totally successful. We’ve been trying a bunch of other methods, including raising baby fish in fish hatcheries and trucking them to tributaries, where they grow and eventually head downstream to the ocean, hopefully to return when they want to have babies of their own.

Atlantic salmon, as the sexiest and biggest of our anadromous species, was the focus of these efforts for decades but they are probably goners from New England. In a quarter century of trying, the largest number of salmon caught at the Lawrence dam trying to return was a pathetic 402, and in most years the number was far smaller.

“It’s seems they’re not getting nutrients they need in the ocean, they need to get back to the rivers. It’s what you’d expect with a cold-water species: their range is shrinking,” said Carpenter.

Efforts to restore the Atlantic salmon to the Merrimack and Connecticut rivers were abandoned in 2014 as not worth the expense. Efforts continue to restore salmon to a couple of rivers in Maine, and their population is relatively stable in eastern Canada, but for New Hampshire the focus has shifted to herring.

Herring – a term for two species, blueback herring and alewife – are a lot less exciting than salmon but are probably more important for the ecosystem, since they’re a food source for everything from rainbow trout to ospreys.

They were doing as poorly as salmon through the first decade of this century, but in 2012 the numbers returning up the Merrimack River began to rise. This year and 2016 saw the most ever recorded: Well more than 400,000 each year, raising hopes that the species has truly rebounded.

There’s a virtuous-circle aspect to the herring story, because success begets more success.

“When you have this many fish, things go smoothly because there are so many fish you can evaluate what’s working, what isn’t,” said Carpenter.

A consistently good herring run might even prod the next big, expensive step in river restoration: Building fish ladders at the Hooksett Dam and then perhaps even Garvin Falls Dam in Concord. Those would allow herring to make it much further upriver without having to be trucked around and placed into the tributaries of the upper Merrimack River.

“The ultimate goal is to get the whole watershed open, so they can spawn in the Suncook, the Contoocook (rivers) – to the point where the population will maintain itself,” said Carpenter. “The stocking that we’ve been doing, the restoration work, is starting to bear fruit.”

Improvements at dams might help another important species, shad. Shad aren’t showing as much of a rebound as herring but they’re doing better than salmon.

“The Lowell dam has been bottleneck for shad passage,” said Carpenter. Only about 10 percent of shad that get past the Lawrence dam make it past the Lowell dam, which means that most of them “are forced to spawn in reach between Lawrence and Lowell,” not exactly prime territory.

As for eels, less is known about them but research continues on ways to help, including designs and operations of hydropower turbines so they’ll do less damage when fish go downstream, through the turbine.

All of which provides a bit of good environmental news, something that we could certainly use. Who knows, maybe someday kippered herring will become a part of the standard New Hampshire breakfast.