New Hampshire wants us to play spot the turkey online 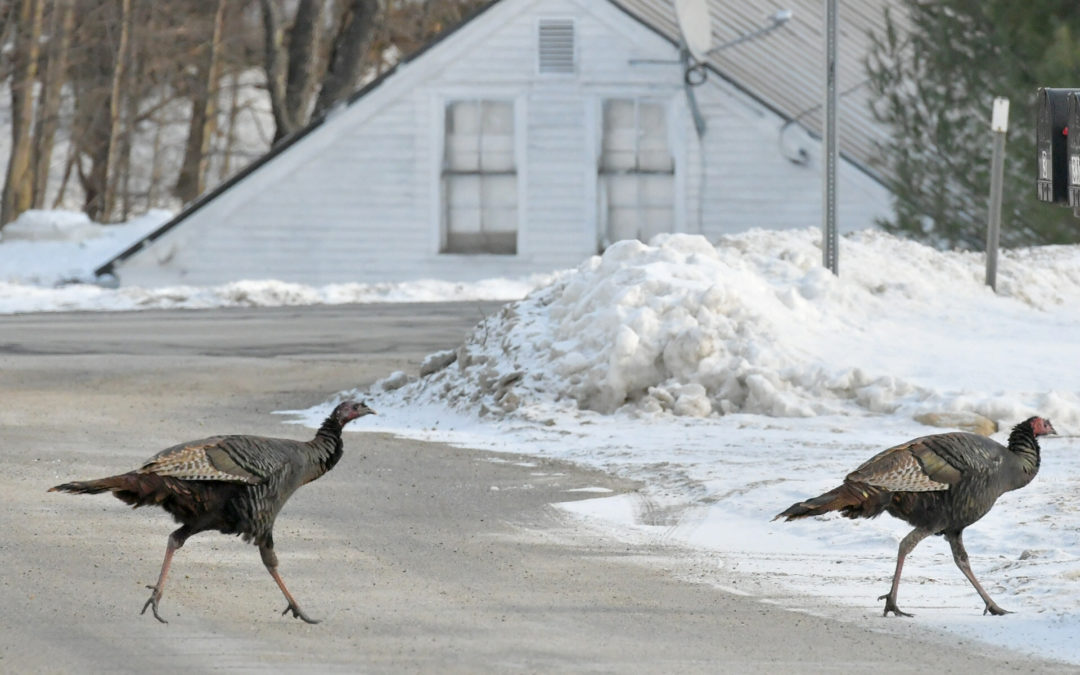 The New Hampshire Fish and Game Department is asking the public to report sightings of wild turkeys online at https://www.surveymonkey.com/r/winter_flock_2019 starting January 1 and running through March 31. (Please do not report multiple sightings of the same flock!)

Last winter, volunteer turkey watchers submitted 1,372 flock reports, totaling 20,224 turkeys. Reports increased from the previous year’s survey totals of 998 flocks and 19,298 turkeys. “The growth can be attributed to a probable increase in the statewide turkey population and a relatively easy winter in much of the state where turkeys could take advantage of bare ground and abundant acorns,” said Fish and Game Turkey Biologist Ted Walski.

The online survey is designed to fill gaps in Fish and Game’s existing winter flock data collection efforts. The digital survey asks participants to report the number of turkeys in each flock, where they were seen, the type of habitat the birds were observed in, and what the turkeys were feeding on.

NH Fish and Game is also asking observers to report any signs of two viruses, Lymphoproliferative Disease Virus (LPDV) and Avian Pox Virus which have appeared in New Hampshire’s turkeys in recent years. Learn more at www.wildnh.com/wildlife/turkeys/turkey-virus.html. “The viruses are not too widespread yet, but we are keeping a close watch,” said Walski. “Look for warty protuberances in the head and eye area.”

Summer Brood Survey Results:  Fish and Game has compiled results from the 2018 Summer Brood Wild Turkey Survey, another online reporting effort that helps monitor turkey hens and poults in New Hampshire. The public reported 1,784 broods during the summer of 2018, with over half of them in the southeastern part of the state.  Periods of rain and cool weather in May and June negatively impact hatching success, and relatively few broods were observed in May and early June, according to Walski. However, brood sightings from late July and August indicated a fair number of poults per hen and a significant number of broods from re-nesting.

Restoration Success:  New Hampshire now has an estimated 40,000 wild turkeys. Their presence here is a true wildlife restoration success story.  Wild turkeys had disappeared from New Hampshire’s landscape for more than a century because of overhunting and habitat loss from extensive land clearing in the 1800s.  Their recovery in the state began with a successful reintroduction of 25 turkeys in Walpole by NH Fish and Game in 1975, an event in which Ted Walski participated. Modern-day turkey research and monitoring is funded by the federal Wildlife Restoration Program, supported by the purchase of firearms, ammunition, and archery equipment.