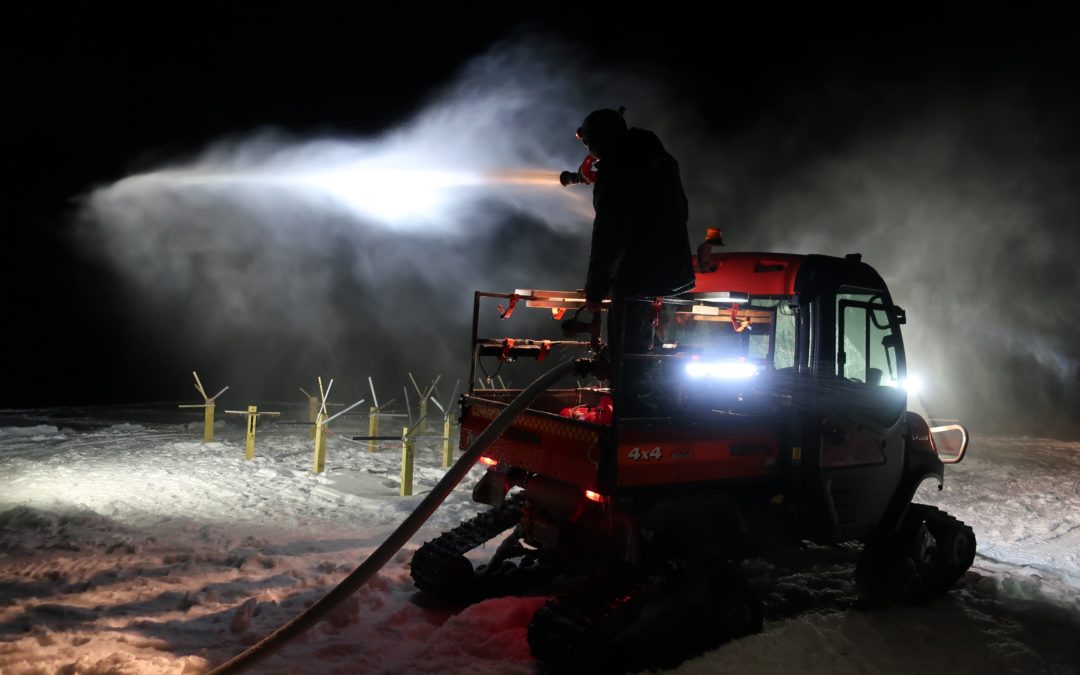 Ice storms are everybody’s least favorite type of winter weather. Unless you’re a certain kind of scientist, that is; then they’re fascinating in a scary sort of way.

“When you first start doing the icing, with the sprayer slowly going back and forth, coating dowels or trees, it’s sparkling, it’s tinkling – it’s one of the most beautiful weather events you have,” said Lindsey Rustad, a research ecologist and team leader at the Hubbard Brook Experimental Forest near Woodstock, where a series of experiments create artificial ice storms to teach us more about the phenomenon.

“You get a tenth to two-tenths to a quarter of inch of ice, and then you start getting things breaking. Three-tenths, four-tenths, half an inch, you start having tree branches coming down, and then trunks. It goes from a beautiful, mesmerizing experience to absolutely terrifying in the space of four to five hours,” she said.

Teams have been creating artificial ice storms at Hubbard Brook Experimental Forest for several years to better understand their damage and impact. “Instead of being ice storm chasers, we would bring them to our backyard laboratory,” said Rustad, who has been overseeing various field experiments at Hubbard Brook since 1997.

Last week teams created their latest artificial ice storm. It was much less alarming than the tree-breaking tests of past winters, and it may produce something that I’ll be able to use in my own yard.

For seven hours, from 6 p.m. to 1 a.m. on a night that saw temperatures drop to 8 degrees Fahrenheit beneath a full moon, 10 people worked at a 50-by-50-foot plot, spraying water on the weirdest looking artificial forest you’ve ever seen. Twenty-four little “trees” were arrayed in a pattern, some made of wood some aluminum, some wire, with “branches” at three different angles and three different diameters and covered with different surfaces.

“It was a crazy concoction of these devices, in a very specific statistical design,” Rustad said. 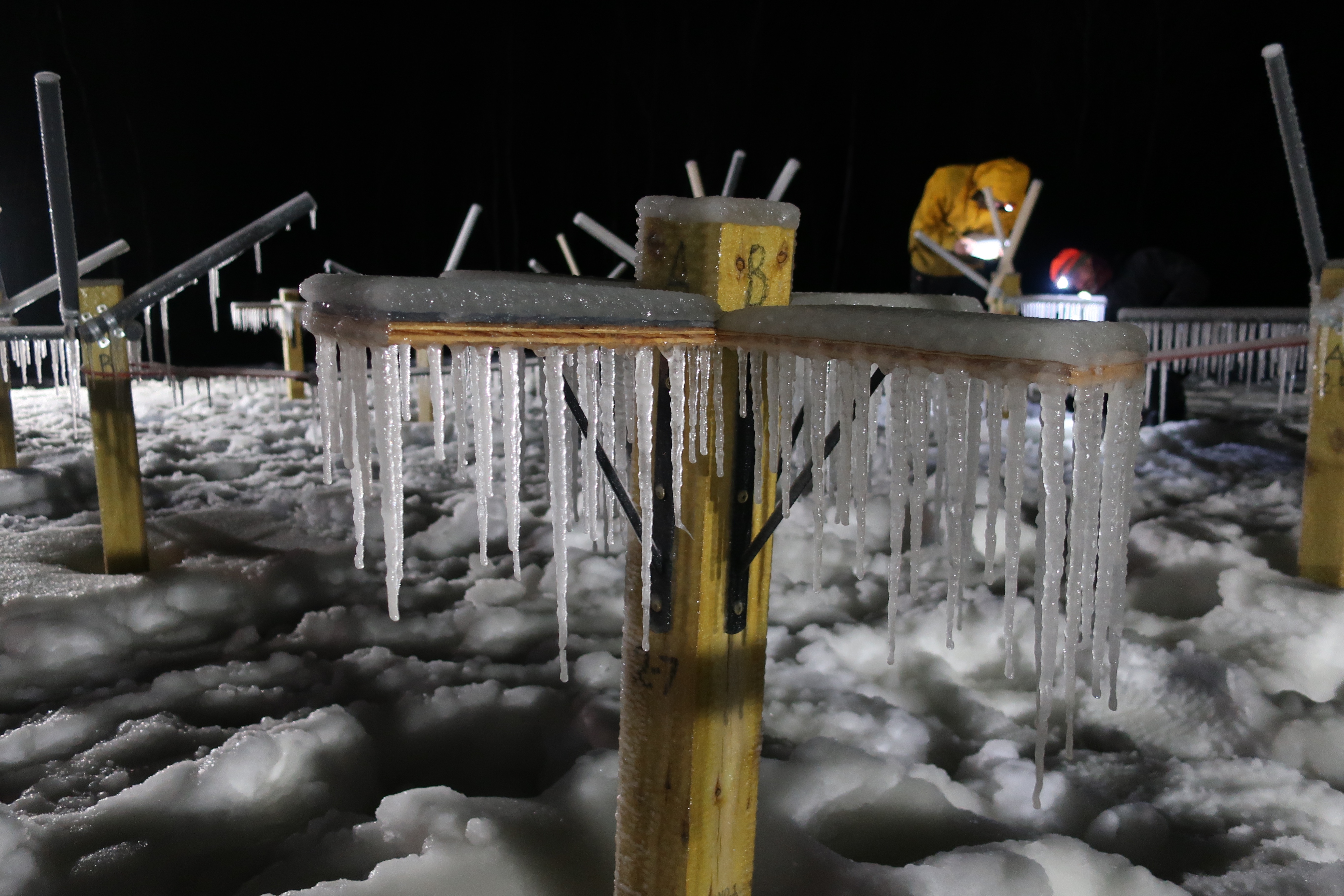 The team sprayed water all over them until ice built up to a certain level, made measurements galore with calipers, then sprayed more and measured again. In all, more than 2,300 data points were collected, with numb fingers treated by hand warmers and doses of hot chocolate.

The data is being crunched to determine which material and design most accurately reflected the water that fell, and which measuring system is best.

“One thing we found is that we do need a come up with a way to measure the icicles,” Rustad said.

The point of all this is to create a simple tool that will allow consistent ice-accumulation data to be gathered by almost anybody, even a schlub like me.

“We had workshops at Hubbard Brook … and learned there really is no consistent way to measure ice. A lot of those measurements you hear reported are somebody’ s friend, cousin or uncle who happens to call in,” said Rustad.

The idea is to distribute them through CoCoRaHS, the national citizen-science program for collecting precipitation data. (That awkward name means Collaborative Community Rain Hail Snow network.) More than 10,000 people post CoCoRaHS measurements each morning, from all 50 states, parts of Canada and several Caribbean islands, creating a more finely detailed picture of precipitation than meteorologists can gather on their own, which is valuable for flood prediction among other things.

Regular Granite Geek readers will know that I’m one of those CoCoRaHS volunteers, having gathered data in my yard for years using a calibrated rain gauge and a board for gathering snow totals. I look forward to adding an “ice tree” to the mix.

There are obvious reasons for knowing more about ice storms, the most destructive of winter events. But as is so often the case with weather and climate these days, there’s an alarming subtext: Our best predictive modeling says that ice storms are just going to get more dangerous with climate change.

I groaned when Rustad delivered this depressing news, but she would have none of it.

“We have to know, right? We have to be prepared,” she said. “If we do have these big ice storms, how much treefall will there be? How should forest managers respond, should they be thinning the forest in different ways? … How about emergency management, utilities?”

That sort of push for certainty is the reason that Hubbard Brook Forest exists in the first place.

The area was bought in 1955 by the United States Forest Service to do studies on an entire ecosystem. Over the years more than 100 Ph.D. theses have been based on work at Hubbard Brook while more than 1,500 research papers have come out of here on topics ranging from nitrogen leaching to the life of ground beetles to the decay rates of bark.

At the moment Hubbard Brook Experimental Forest is best known for being the place where “acid rain” was first detected. Maybe one day it will be known as the home of the Ice Measurement Tree.