Still waiting for the electric-car future to arrive

The "recharge station" icon developed by the Keene team in 1993. I don't think anybody has come up with a better logo for "here be electric-car chargers!"

Monday was Earth Day and electric-vehicle fans were out in force. But the weekend weather delayed some pre-Monday events, including Drive Electric Keene. That showcase of EVs will now happen this Saturday, April 27. It’s organized by the Monadnock Energy Hub; find details at greenmonadnock.org/events/

A member of the group, Peter Wotowiec, wrote me about it and added: “We are advising and working closely with the Monadnock Food Coop to install EV charging facilities as part of their near term expansion. And we encourage and advise other Monadnock localities interested in setting up EV charging stations.”

In their honor, I dusted off a 2017 story I wrote for the Concord Monitor that was an update of a 1993 story I wrote for the Nashua Telegraph about some far-seeing EV advocates in Keene.  It included perhaps my favorite front page from my 41-year-and-counting reporting career, since the copydesk included a shot of that 1993 story. It’s the old me and the new me, all at once! 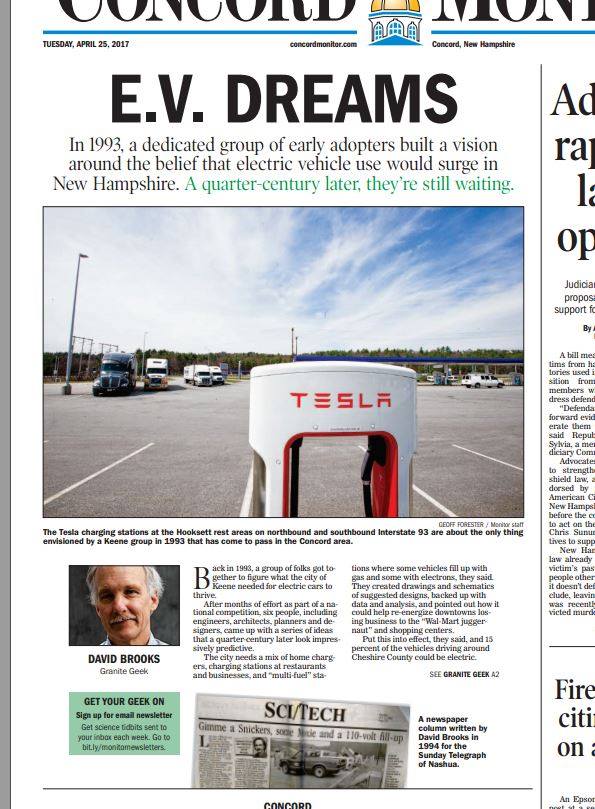 You can read that story and see attached photos on the Monitor website here, or you can read the words below:

Back in 1993, a group of folks got together to figure what the city of Keene needed for electric cars to thrive.

After months of effort as part of a national competition, six people, including engineers, architects, planners and designers, came up with a series of ideas that a quarter-century later look impressively predictive.

The city needs a mix of home chargers, charging stations at restaurants and businesses, and “multi-fuel” stations where some vehicles fill up with gas and some with electrons, they said. They created drawings and schematics of suggested designs, backed up with data and analysis, and pointed out how it could help re-energize downtowns losing business to the “Wal-Mart juggernaut” and shopping centers.

Put this into effect, they said, and 15 percent of the vehicles driving around Cheshire County could be electric.

Not bad. Only one problem: They thought it would happen by 2005.

“We were a little optimistic,” admitted Daniel Scully.

Scully, an architect who has practiced in downtown Keene for decades, was the project coordinator for a team from the Monadnock/Keene area that entered a contest called “The Electric Vehicle and the American Community,” sponsored by the U.S. Energy Department and a number of electronics and automotive companies. This was 1993, when electric cars were a futuristic dream except for test models full of lead-acid batteries, but even then it was obvious that a new sort of infrastructure (ugh, what a clumsy word) was needed if electric vehicles could challenge cars and trucks powered by blowing up dead dinosaurs.

The contest asked for designs outlining how charging systems would look and function in small, medium and large cities. The Keene group won a total of $11,000 for snagging first place in the small-city category, plus a special award for a car-charging logo developed by graphic designer Charles Gibson, showing a capital E that also looked like an electric plug.

I wrote about the contest at the time and had forgotten about it until I stumbled across the article, headlined “Gimme a Snickers, some Moxie and a 110-volt fill up.” (A New England newspaper rule: Mention Moxie whenever possible.)

So I thought I’d see if the team was still around and get their reactions to what has – or hasn’t – happened.

Earlier this month I met with Scully, Gibson, architect Susan Phillips-Hungerford and environmental designer Alan Saucier. Two other members of the team weren’t available: Peter Ryner, then Keene’s planning director, and electrical engineer Graham Walter. As a result, our conversation was heavier on design than technology, but that was also reflected in the contest.

The state’s southwest corner was ripe for this contest because it was home to such things as ConVal High School’s solar-car program; TEA, a Harrisville-based company that drew national attention for its work on passive and solar homes; and the environmental movement around Peterborough, which today has the state’s largest solar farm.

Plus, Phillips-Hungerford said, “It was just an intriguing problem.”

Technology, as is usually the case, formed the framework around which choices could be made.

“We did research in terms of where battery technology was likely to be heading, and where charging technology was likely heading, so we could take this snapshot. We certainly didn’t just guess at it,” said Saucier, the designer. “We made a very conscious decision not to go ‘Jetsons’ – we wanted to stay realistic.”

The group quickly saw the biggest difference that electric vehicles make in a driver’s life: They give us different options for fueling up, instead of being forced to go to one of a few public locations once or twice a week. A successful infrastructure would deal with all those options.

“As planners, the phrase we would often use is ‘parallel activities,’ ” Scully said.

They realized that most charging would happen at home or at work, but that public charging was also necessary.

The entry got very Keene-specific, including turning some of the city’s funky alleys into “charge-and-shop” drive-thru sites, covered to keep out the snow. You’d leave your car, spend some money at a restaurant or store, then return and drive away. They also had a clever idea I haven’t seen before: Connect the power cords to overhead inertial reels and put them on street lights. You’d pull into a parking space, pull down the cord, plug in and go shopping.

Both of these ideas were part of their argument that electric vehicle infrastructure could draw people back downtown – more of a concern in the early 1990s than in our new-urbanism era.

For longer trips, they envisioned “multi-fuel” service stations near Route 9, with gas pumps alongside electric charge stations plus a battery-swapping service to speed up charging (an idea that sounds good, but, as was later shown by the failed startup Better Place, doesn’t work well for cars).

At least as important as technology was design, including that electric-charging logo that got the judges excited. (They tried to sell that logo as a national standard for vehicle charging stations, incidentally, but were about two decades early.) The team worked hard to create a coherent, attractive design to help electric car owners find public charging spots, as well as give some visual cachet to the whole driving-with-electricity idea.

Winning the prize gave the team a chance to go to Washington and get their award alongside teams from around the country, and it still occupies a place on their resumes. (If you want to see all the winners, Stanford University has them online at web.stanford.edu/dept/SUL/library/extra4/sloan/EVonline/contest.htm)

However, despite the prize, you’ll notice that almost none of what they designed has been created. The city of Concord, for example, has no public charging stations – not in car parks or from overhead reels. Your only battery-refilling hopes here aside from home or work are a few hotels or car dealerships that sell electric vehicles.

There is one exception: Tesla. Its Supercharger stations – four in New Hampshire – are exactly what the Keene group envisioned for multi-fuel stops. They’re handsome, distinctive, fast, and the Tesla website even touts restaurants near each site.

“When I saw the Tesla station, it was like a bombshell. They have their own charging station, beautiful industrial design,” said Gibson, whose interest led him to design some gorgeous charging posts, known as bollards. “What they were doing is branding the charging, branding electricity, in the same way we have branded gasoline. Very nice.”

The drawback, of course, is that only Teslas can use these stations. That’s understandable from Tesla’s point of view, since they coughed up tens of millions of dollars to build the network, but it holds back the electric car industry.

Notably, the appeal of the Chevy Bolt, the affordable electric car that wants to be the Model T of electron-powered transportation, is limited by the lack of long-distance charging stations that are easy to find, since GM isn’t funding service stations.

The best illustration of how reality has fallen short of dreams came when I asked who in the room owned an electric car, leading to an embarrassed silence. (Me either, by the way.) If you live in a rural-ish area like Cheshire County, where most things are a long drive from other things, lack of charging infrastructure is a real obstacle.

But why hasn’t there been more improvement since 1994?

Lots of reasons, they agreed: Lack of industry standards; slowness in battery development; policy pushback from the fossil fuel and automotive industries; and the chicken-and-egg problem of which comes first, vehicles or infrastructure.

But there’s hope, if for a dismal reason: climate change. Fear of the global effects have given new impetus to electric vehicles, since electrification of the entire economy is one of tools needed to reduce carbon emissions. More people are interested and the technology is improving, but we’re barely out of the starting gate.

“It seems to be the way things are evolving,” Scully said. “I have hope.”