Wikipedia popularity map for NH, but who is Triple-H? 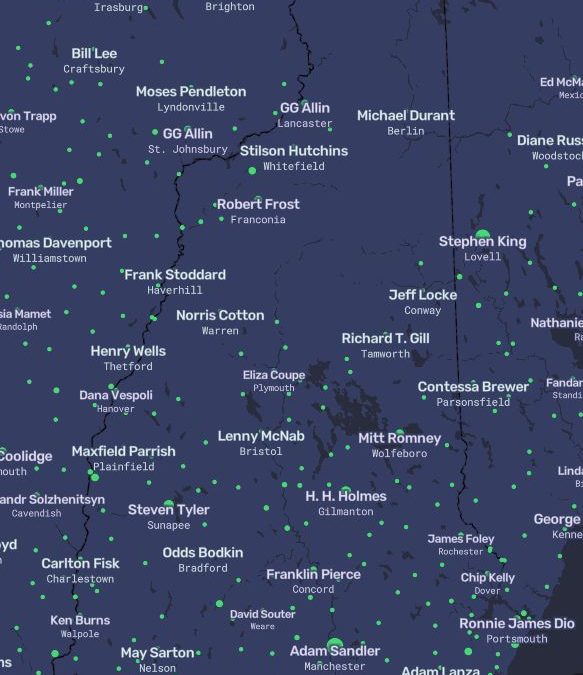 In an entertaining but essentially meaningless bit of data mapping, a couple of folks at The Pudding, an online publication that looks at culture via visual data, assembled a map showing the “most Wikipedia-ed” person throughout the U.S. (here’s the map)

In New Hampshire, actor/comic Adam Sandler leads the pack, which isn’t surprising. It’s a little hard to tell, but it appears that a guy with the wrestling name of Triple-H edges out singer Steven Tyler of Aerosmith and serial killer H.H. Holmes for the No. 2 spot.

People like Franklin Pierce (a president), David Souter (a Supreme Court justice) and Robert Frost (a poet) are way back in the pack.

This is meaningless because there’s no good definition of “most Wikipedia’ed” nor of connecting a person with a particular place – birthplace? where they lived longest? where they did the work/thing they are most known for? – but it’s fun.

Here’s the makers’ description of how it was put together:

Data for this story were collected and processed using the Wikipedia API. The period of collection was from July, 2015–May, 2019, from English Wikipedia. It was inspired in part by this map.

Person/city associations were based on the thousands of “People from X city” pages on Wikipedia. The top person from each city was determined by using median pageviews (with a minimum of 1 year of traffic). We chose to include multiple occurrences for a single person because there is both no way to determine which is more accurate and people can “be from” multiple places