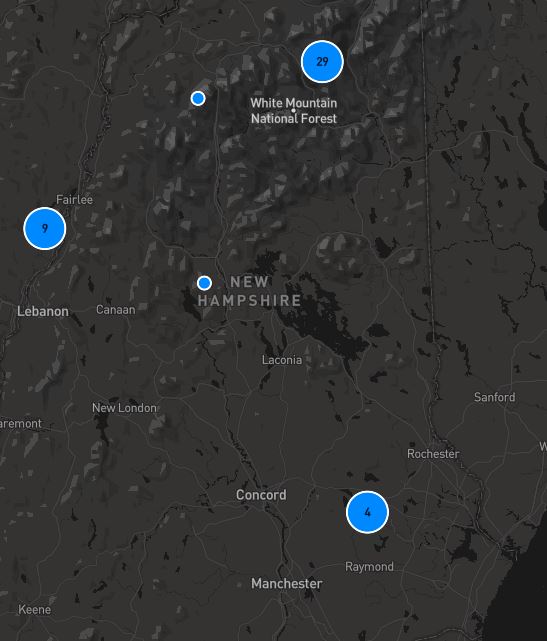 If you’ve ever shoveled snow, you realize how hard it is to know just by looking how much water it contains (i.e., how much each shovelful will hurt your back). A foot of snow lying in my yard, where I’ve measured it for years, sometimes melts down to less than an inch of water and sometimes to as much as 4 inches of water, which is a huge difference.

Knowing this figure for acres and square miles of snowpack in remote areas is important in New Hampshire for predicting spring floods and in drier parts of the world for planning on drinking water supplies. So there have long been efforts to make better models for predicting “snow water equivalence” from afar.

A new computer model is being developed based in part of data gathered by “citizen scientist” folks who measure water content when they’re out snowshoeing or cross-country skiing. The Community Snow Observation website lists hundreds of measurements, including many in New Hampshire. A screenshot of the map is shown above.

An article in Phys.Org, a science news site, explains how the new model works:

In addition to snow depth information collected and uploaded by recreationists using avalanche probes, vast amounts of data are also available thanks to LIDAR, a remote sensing method that uses a pulsed laser to map the Earth’s topography.

The new model developed by the Community Snow Observations team and collaborators at the University of New Hampshire calculates snow-water equivalent by factoring in snow depth, time of year, 30-year averages (normals) of winter precipitation, and seasonal differences between warm and cold temperatures