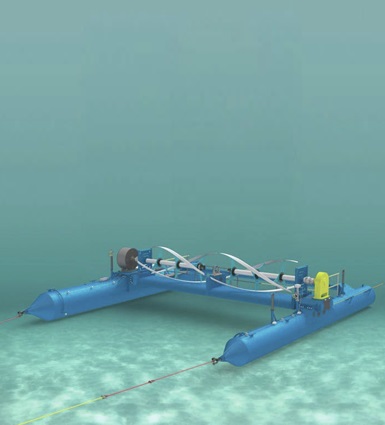 A Maine company called Ocean renewable Power Co. says its in-river turbines, which look sort of like egg beaters with the axis perpendicular to the river flow, can produce hydropower without requiring dams or interfering with fish runs.

The system will get a test in a tiny Alaska village that’s tired of burning diesel for generators but doesn’t want to harm the Pacific salmon that go up and down the river in their weird life cycle. EnergyCentral story here:

The system had to operate without hurting the millions of salmon passing through and it had to be able to avoid the river ice that breaks up after forming each winter.

Company officials say they’re confident the turbines won’t harm adult fish, based on a trial river run monitored with underwater cameras a few summers ago of a prototype of the “RivGen Power System.” CEO Chris Sauer said the prototype was in place during the peak of the salmon season, when at least 1.5 million fish swam by.

“There wasn’t a single injury or mortality,” Sauer said.

The system isn’t expected to affect the smaller juvenile salmon or interact with river ice, although real-world testing has not been done in that time of year, according to Sauer.