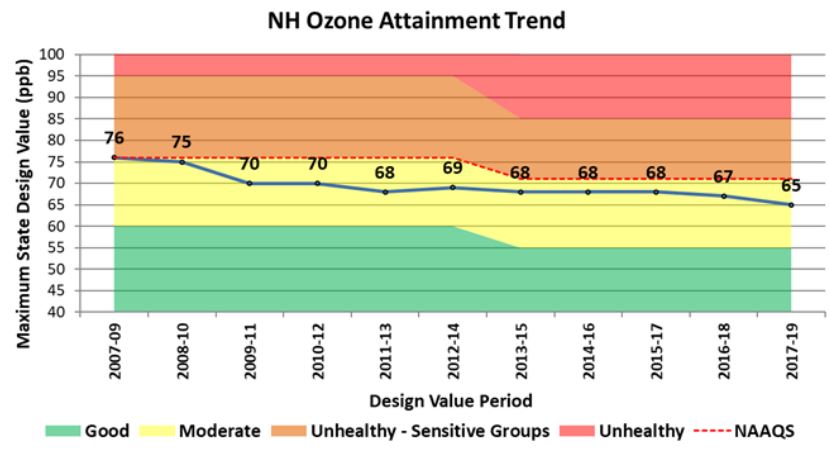 New Hampshire had very good air quality during the summer of 2019, thanks to a lot of hard work, and some good luck. The hard work includes years of planning and implementation of emissions reductions in and upwind of New Hampshire, and the good luck is that winds were favorable for clean air this last summer.

As a result, there was only one day in 2019 that the 8-hour ozone concentration reached the level of unhealthy for sensitive groups. This occurred on July 30th at Odiorne Point in Rye. Ozone is the primary ingredient in smog and is not directly released by pollution sources. Instead, it is formed in a chemical reaction between two commonly emitted air pollutants, nitrogen oxides and volatile organic compounds, in the presence of strong sunlight and heat. In New Hampshire, cars and truck emissions are the most common source of these precursor emissions of ozone.

Ozone concentration trends for New Hampshire have been decreasing slowly and all portions of the state have been in attainment of the National Ambient Air Quality Standard (NAAQS) since 2010. The NAAQS allows a small number of days to exceed the threshold and still meet clean air requirements, which is why New Hampshire can have days considered to be unhealthy each summer and still attain the health standard.