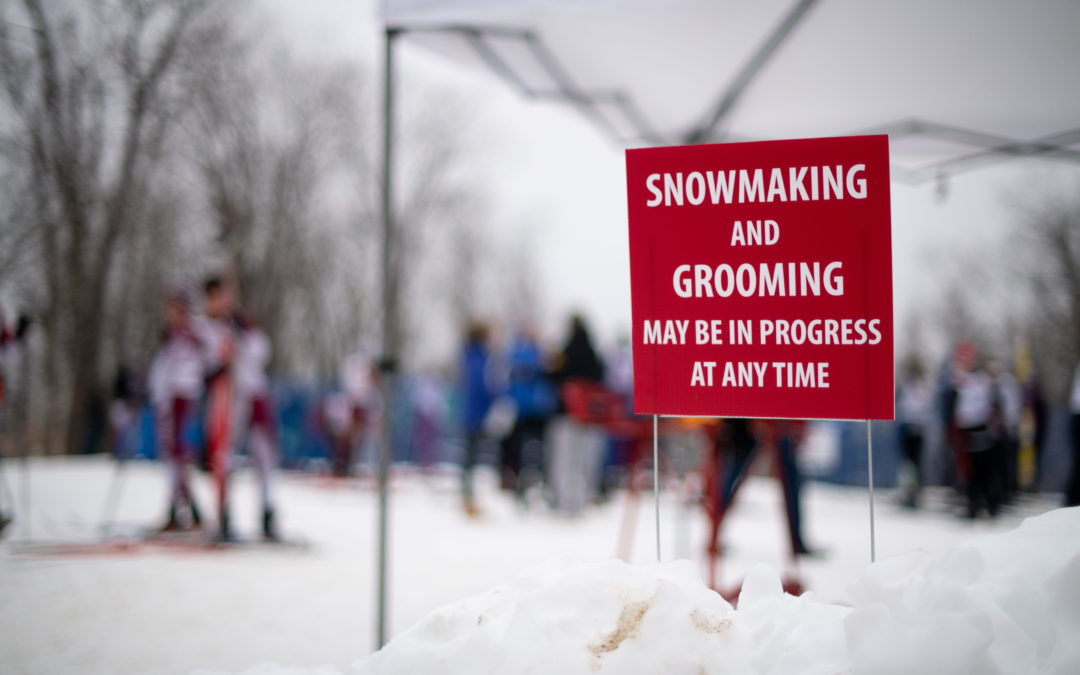 The Dublin School is among several private institutions in the state that have opened snowmaking facilities for Nordic events in the past few years. Erratic snowfall in the region has resulted in a greater need for snowmaking to keep up with winter events. Ben Conant / Monadnock Ledger-Transcript

We all know things are going to change as the climate warps around us. But it’s still startling when a change actually arrives.

Like this one: Cross-country skiing in New Hampshire needs snowmaking.

This seems very wrong, even to a downhill skier like me. Donning skis to stop by woods on a snowy evening is part of the Currier and Ives image of New Hampshire we all hold dear. If it’s going to require a snowmaking gun and grooming machines, and take place only on a three-mile track, then we might as well live in New Jersey.

“If that was the sport, I’m not sure I would have signed up,” said the coach of the Concord High Nordic ski team, Sam Evans-Brown. “Part of the joy of cross-country is going somewhere where you can ski 30 miles without going on the same trail twice and you feel like you’re going somewhere. … With this, it feels like track, as opposed to a lifestyle.”

Yes, by the way, this is the same Sam Evans-Brown who is a longtime New Hampshire Public Radio reporter and hosts the “Outside/In” and “Ask Sam” podcasts.

A Gilmanton native, Evans-Brown says he joined his high school Nordic team two decades ago, mostly because he wanted to date a girl on the team, but grew to like the sport. Eventually, he qualified for the NCAA championship as he says he was “briefly one of the fastest skiers on the East Coast,” although I suspect parenting has slowed him down a bit.

(Evans-Brown also ended up on skis in a giant photo on the side of a city bus in Argentina. You’ll have to check “Outside/In” archives to find the details about one of the oddest sports honors I’ve ever encountered.)

I questioned him about the need for snowmaking for ski racers after hearing that the private Holderness School had announced a $6 million gift to support athletics, part of which will create a “five-kilometer homologated cross-country skiing venue with lights and snowmaking.” (“Homologated” sounds interestingly creepy, but it only means “certified by ski racing’s governing body.”)

Is this new, I asked? Not really, he said, but it’s growing.

Evans-Brown said snowmaking for Nordic racing tracks has been going on at Gunstock Nordic Club since his high school days, and has happened in fits and starts at a couple of other locations. But he said it has only become well-established in the state recently.

Proctor Academy, Deerfield Academy and the Dublin School have opened snowmaking facilities for Nordic events in the past few years, and I imagine Holderness is scrambling to catch up.

Evans-Brown is sympathetic to ski racers’ need for snow – he gnashes his teeth in rage on Twitter every time the forecast tops 35 degrees – but calls this trend an unfortunate necessity that bodes ill for the future.

“What is cross-country skiing? It increasingly is not going to be what it used to be,” he said. “You’re not going to slap on skis and go around in the woods any more. … It feels like it will become more and more like ice hockey: You go to a facility, it’s pretty expensive, pay your dues, otherwise you can’t (ski).”

Nordic areas could add snowmaking to their regular trails but that’s very hard, partly for a reason that I hadn’t considered: Gravity. Water to feed snowmaking machines can’t sit in the pipes or it will freeze, so it has to be removed when the fans are turned off and the water stops flowing.

That’s relatively easy on a mountain – “Pipes drain downhill,” Evans-Brown pointed out – but on a flat cross-country course, “you wind up having multiple drainage points.” This is complicated and produces a lot of failure points, which creates operating expenses. Few areas are likely to take this on.

“It comes down to the money. The cross-country crowd are a bunch of cheapskates, historically,” Evans-Brown added.

Downhill skiers of a certain vintage are feeling a sense of deja vu. Through the 1970s, almost every town in the state had a little snow hill topped by a re-purposed car engine that powered a rope tow. You could downhill ski on a whim for very little money almost anywhere, as long as the weather allowed.

Then snowmaking came along and soon skiers were demanding consistency that small hills couldn’t afford. When winters failed to produce natural snow regularly, virtually every small mountain shutdown. (Soaring insurance costs contributed, too; at least that’s not an issue for cross-country areas, so far as I know.)

These days, if you want to ski or snowboard downhill and you don’t have the skills to go back-country skiing, you have only a few outlets and have to cough up big bucks. The question is whether, as our winters become more erratic and shorter, casual cross-country skiing faces the same fate.

Pond hockey, another sport that is part of New Hampshire’s winter spirit, is facing the same issue, as reflected in the annual struggle to run the annual 1883 Black Ice Pond Hockey Championship in Concord. I haven’t been ice skating at all this winter, since I don’t want to skate indoors.

It’s part of the adjustment that we’re all going to have to make in the world that we and our ancestors are creating. Which is, of course, an incentive to stop making it even worse.