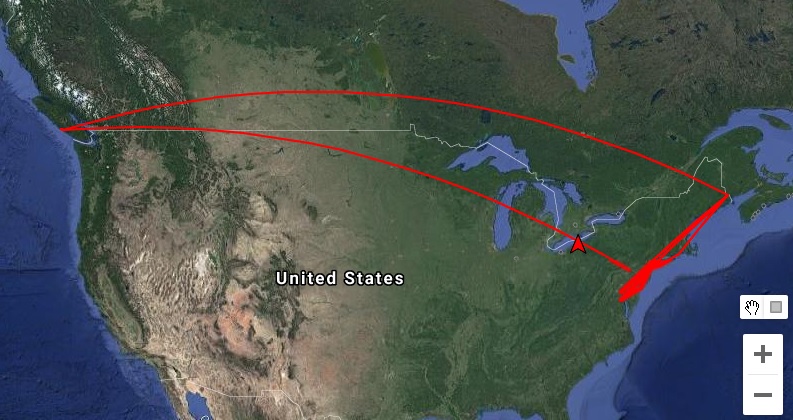 A grant from the U.S. Fish and Wildlife Service (USFWS) will enable a New England research partnership to expand a new migration tracking system across New England. The three-year, Competitive State Wildlife Grant of $998,000 will be matched by $355,500 in private funds.

The grant will enable project partners to establish 50 automated telemetry receiving stations in Connecticut, Maine, Massachusetts, New Hampshire, Rhode Island, and Vermont. These receivers can track movements of birds, bats and even large insects tagged with radio transmitters called nanotags – so named because they are tiny enough to be placed on migrating animals as small as monarch butterflies and dragonflies. The receiver array will be part of the rapidly expanding Motus Wildlife Tracking System (motus.org), established in 2013 by Bird Studies Canada. Taking its name from the Latin word for movement, the Motus network currently includes nearly 900 receiving stations around the world.

The combination of highly miniaturized transmitters – some weighing just 1/200th of an ounce – and a growing global receiver array enables scientists to track migrants previously too small and delicate to tag with traditional transmitters. This technology is revolutionizing migration research by documenting the travels of individual birds, such as a gray-cheeked thrush that made a remarkable 46-hour, 2,200-mile non-stop flight from Colombia to Ontario.

Researchers from Massachusetts Audubon and the Massachusetts Division of Fisheries & Wildlife will use nanotag transmitters to study the migration routes, timing, and behavior of American Kestrels, the region’s smallest falcon and a bird that has experienced drastic and largely unexplained declines across New England. Finally, researchers will also conduct field tests to better understand the detection limits for newly developed transmitters and receivers.

Any nanotagged animal that flies within nine or 10 miles of any of the receivers will be automatically documented. For example, a receiving station installed in Dixville, N.H. to monitor rusty blackbird activity detected several shorebirds migrating from Churchill, Manitoba and James Bay, Ontario to the Atlantic coast in 2019.

“New Hampshire’s Wildlife Action Plan identifies dozens of migratory birds, bats, and insects as Species of Greatest Conservation Need”, said Michael Marchand, supervisor of the Nongame & Endangered Wildlife Program, NH Fish and Game Department. “Conserving these species requires knowledge of how they use and move through New Hampshire’s landscape, as well as across other political boundaries. Information gathered from this new technology, coupled with other ongoing research and conservation efforts, will be important in implementing effective conservation measures for these species.”

“This project is important because never before have we had the technology to see intimate details of an individual species’ migratory pathway in this way,” said Doug Bechtel, president of New Hampshire Audubon. “Motus technology and this particularly dense array that will be constructed in New England, especially in conjunction with the expansion in the mid-Atlantic states, will enable conservation organizations, industry leaders and legislative decision-makers to see how habitats are being used on a landscape level and make associated conservation decisions based on near real-time data.”