Let’s try to quantify the ‘can N.H. open now?’ debate 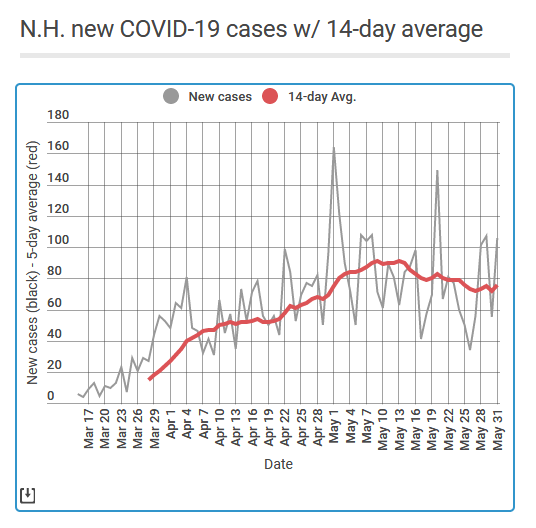 NOTE: This column ran Monday. I’ll be updating it weekly; you can see it on ConcordMonitor.com by next Monday if you can’t wait for the Thursday newsletter.

If you’re wondering how we will know when the pandemic is over, there’s good news and not-so-good news.

The not-so-good news is that the pandemic won’t be really and truly over unless an effective vaccine is developed, manufactured, distributed and used by most of society, which won’t happen for a year or 18 months at the earliest. Even then the virus is almost certainly going to linger in some people so that outbreaks will always be possible if we drop our guard.

Accept the fact that we will live with COVID-19 for the rest of our lives, just as we live with the flu and Lyme disease. Then demand that our elected officials learn from this and prepare for the next pandemic, because there will be one.

The good news is that the pandemic can be “over,” in the sense that everyday life can cautiously resume, when we get it under control even without a vaccine. But how do we know when we’ve done that?

“I don’t think anybody knows the answer to that question,” said DHHS Commission Lori Shibinette at a press conference last week.

COVID-19 is so new that epidemiologists are still trying to figure things out. For example, we don’t know how much immunity people have once they recover from a bout of COVID-19 and how long that protection will last.

Almost two-thirds of the people who have tested positive for the virus in New Hampshire have recovered fully. If they are protected forever, that would be a major step forward. But if they can get sick again, then our concern is greater.

With that proviso in mind, I thought I’d take at stab at developing a list of numbers to check each week as a measure of whether New Hampshire is ready to “open,” whatever that means. Feel free to let me know if you think I’ve missed something.

Similar lists have been developed by several groups. I chose four that seem generally accepted as good metrics. They are also four of the metrics chosen by Vox.com, which has done excellent reporting on the pandemic. Finally, and this is important, they involve data that I can get from the DHHS daily report.

■A two-week drop in cases as measured by the 14-day running average, which indicates the virus is abating.

■Fewer than four new cases per 100,000 people per day, to show that we’re not only improving but are below dangerous levels.

■At least 150 PCR tests performed per 100,000 people per day, as well as a positive rate of tests below 5%, which together show that we’re doing enough testing to be confident in our findings.

Other measures are often used, including hospitalization rates. And what about the number of deaths? That is, of course, a shocking and important figure but in a small state like New Hampshire, where a single nursing home outbreak can triple the daily fatality count, it’s too variable to be a good guide.

So I’ll stick with these and say that if all four are met consistently, it’s a good argument for considering the pandemic to be under control in New Hampshire, even if the disease is still around.

How are we doing?

As of May 27, the 14-day average of new cases has declined for 15 days straight, so we’ve hit that measure – hooray!

New Hampshire has 1.36 million people, so finding no more than four new cases per 100,000 people would be a ceiling of 54 new cases a day. Unfortunately, we have been below that figure only twice since the first week of May, which seems to indicate that the level of the virus is still too high even if it’s declining. Ideally we should be below that figure for two weeks, to factor in the coronavirus’ incubation period. So that’s not good.

Performing 150 PCR tests (the ones that determine if you have COVID-19 right now) per 100,000 people means 2,000 tests a day. We’ve hit that figure a couple of times in the week leading up to May 27 but not consistently – we’re averaging about 1,900 tests per day between the state lab and contracted private labs. Close but no cigar.

The state also reports about 400 antibody tests a day, the ones that indicate whether you have had COVID-19 in the past, but it’s not yet clear how important those are.

Finally there’s the positive percentage rate of tests. If it’s too high, that indicates either that the disease is very widespread or you’re only testing a vulnerable segment of the population. Back in April when New Hampshire was just starting to test, for example, sometimes a whopping 20% of tests were positive. The rate of positives in PCR tests has been steadily declining all month long and for most of the past three weeks, the rate has been at or below 5%. So that’s good, too.

There you have it: Two of my four measures are being met and one is almost being met. We’re closer than I thought.

This doesn’t mean that we’re safe, though. Even if all four are met I’m still going to wear a mask and avoid groups of people in public, which is a shame because I’d love more than anything to shoulder my way up to a crowded bar and order a beer, having to shout to be heard over the band.

But the virus is out there and we don’t know who is carrying it. Until there’s widespread vaccination you’d be a darn fool to pretend everything is fine, no matter what the numbers say  – and I, for one, am not a darn fool.

Not about my health, anyway.