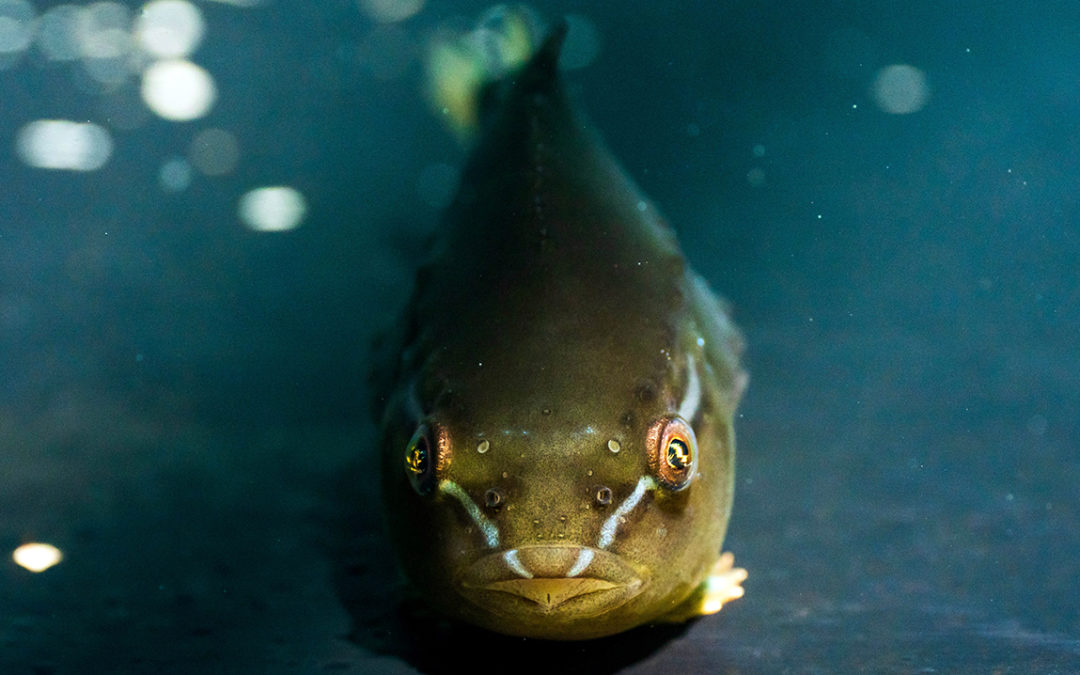 At the UNH Judd Gregg Marine Research Complex, researchers are producing multiple batches of lumpfish in the Coastal Marine Laboratory to demonstrate that lumpfish culture is feasible. (Tim Briggs/UNH)

From UNH News Service: Sea lice hurt Atlantic salmon, steelhead trout and other salmonids, and researchers with the New Hampshire Agricultural Experiment Station at the University of New Hampshire believe using lumpfish as cleanerfish—fish that eat parasites off other fish—may be a sustainable way to manage these pests.

“Lumpfish eat parasites off salmonids farmed in cages in nearshore coastal waters in the northern Atlantic Ocean,” said Elizabeth Fairchild, research associate professor of biological sciences. “Sea lice are a naturally occurring parasite that feed off fish mucus, skin and blood. They cause open wounds on the fish, and in the worst cases, kill them. As a result, mitigating sea lice can be very costly to fish farming operations. We are evaluating the use of lumpfish as ‘biological delousers’ on salmonid farms in the United States.”

Currently, cleanerfish are used in all countries where salmonids are farmed in the northern Atlantic Ocean except in the U.S.

Using lumpfish is a more sustainable way to manage sea lice infestations and increase domestic salmonid production. Sea lice currently are managed by exposing the salmonids to thermal baths on a boat, which can be stressful and harmful to the fish, and not effective over the long run. Prior to these baths, environmentally harmful pesticides were used. They have been banned in the United States.

“We should eat more seafood for our own health, and we can and should increase our domestic seafood production,” said Fairchild. “Using cleanerfish to decrease the damage inflicted by sea lice can increase domestic salmonid production because more farm sites can be used and used more frequently. Today many leased sites in Maine are not used or sit fallow for extended periods because of historically high sea lice concentrations.”

“In addition, new business opportunities would be created if lumpfish can benefit domestic salmonid farms. Salmon farmers will need to source lumpfish from hatcheries and grow-out facilities, a market that does not exist right now,” she said.

The work is important given that in 2017, the United States had a $16.8 billion seafood trade deficit, meaning it imported more seafood than it exported. More than 90 percent of the seafood Americans consume is imported, and more than half of the imported seafood is farmed. Atlantic salmon tops the list of imported fish. Maine soon will be the only state in the U.S. with Atlantic salmon production. In New Hampshire, steelhead trout are cage-cultured through NH Sea Grant and UNH. At least one commercial farm is seeking permits to grow steelhead trout in New Hampshire waters.

This material is based upon work supported by the NH Agricultural Experiment Station, through joint funding of the National Institute of Food and Agriculture, U.S. Department of Agriculture, under award number 1017317, and the state of New Hampshire. Additional support is provided by the Northeastern Regional Aquaculture Center, NH Sea Grant, and the UNH Marine Biology Graduate Program.

Founded in 1887, the NH Agricultural Experiment Station at the UNH College of Life Sciences and Agriculture is UNH’s original research center and an elemental component of New Hampshire’s land-grant university heritage and mission.