Can you fit the whole solar system around Concord? Better start wandering! 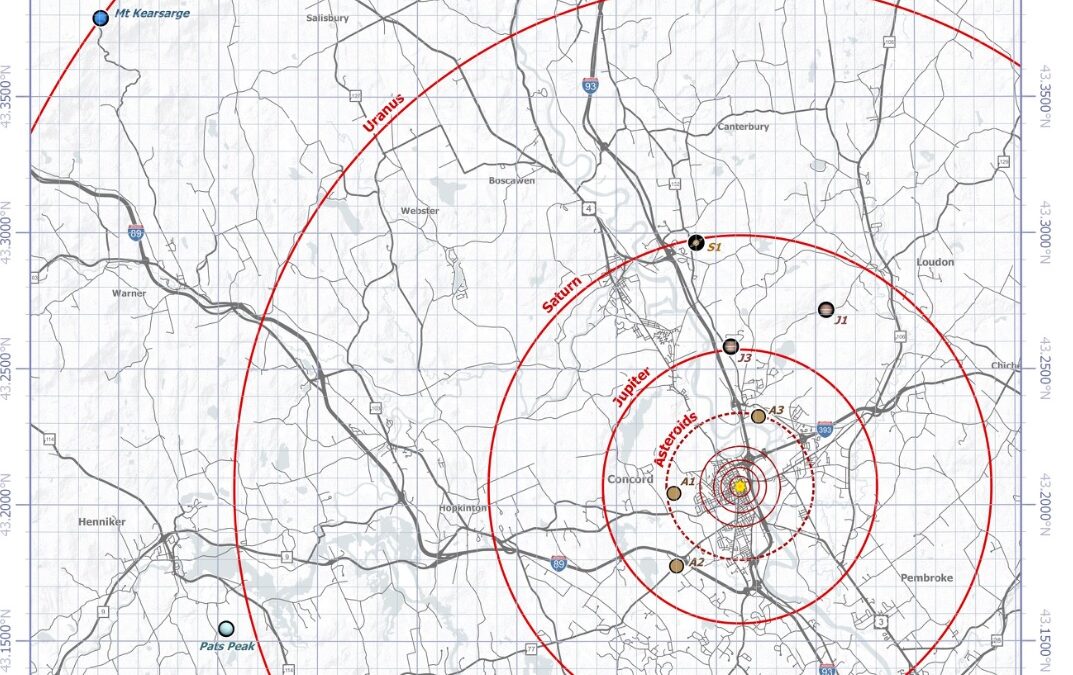 The "orbits" outside Concord.

These days we’re all sick of being stuck inside and want to go for a walk. So why not take a stroll to Venus? Or Jupiter? Or may you’d rather walk one-fiftieth of Earth’s annual trip around the sun?

Rob Kramer can tell you how.

“If you start at the Lowe’s … walk to the Dollar General Store, over to Fort Eddy Road, you have just done a week of the Earth’s orbit. And you can see the dome the whole way,” said Kramer.

By “dome” he means the State House dome, which for Kramer plays a bigger role than just a legislative rooftop. It’s the sun around which his planets orbit in a solar system that is 1/140,000,000th the size of the real one.

And quite a sun, too: “The gold leaf they put on it – on a sunny day, that makes a difference. You can really see it!”

Whether you can see it from the planet Uranus is a little harder: That has to be done from Mount Kearsarge.

Kramer is an anesthesiologist who has worked at Concord Hospital for a quarter-century. He is also known to plenty of kids and former kids for the science talks and projects he has presented at schools around the area and for leading the science club at Bow Middle School for years.

For close to five years, he says, he’s been thinking about creating a “planet walk” in Concord.

Planet walks are scale models of the solar system that are big enough to walk around in. They’re made by shrinking all the planets, asteroid belt and the sun, and then spacing them out on the same scale. The amount of time needed to get from one small globe to another gives a better sense than any picture can of the vast emptiness of space.

Planet walks are a common feature of museums and parks; the Discovery Center has used temporary versions in STEM classes. But one thing about them bugs Kramer: their “false syzygy,” to use the consonant-laden astronomical term for planetary alignment.

“The planets are in a line, always lined up,” he said of other planet walks. “That never happens!”

Kramer says he wanted to present an accurate planetary walk in which planets weren’t lined up. That required calculating the orbit for all eight of them (nine, if you include the asteroid belt; sorry, Pluto fans) and mapping that onto the greater Concord region.

“Now you can look at the speed of the planet, not just the size and distance. You can see how it moves,” he said of the orbits. You can also try to find some of the locations he has marked in maps available on a brochure and website. “It’s a little bit of a scavenger hunt.”

That website is called Wander The Play (wandertheplay.com) because Kramer has also written a play featuring four teens, a yogurt shop, planets singing parodies of popular songs, many planetary moons personified and a ton of astronomical facts and oddities amid the jokes and puns. The idea is to increase the educational reach of the project.

“You throw it out there and there are kids out there who like this kind of thing, you hope it finds them,” he said.

The key to this planet walk is using the State House dome as the sun. Its location means that it can be seen from many places on every orbit and as long as the scale was done correctly, the dome is the same apparent size as the sun would be from the actual planet. A little geometric calculation, showed that the solar system had to be shrunk by a factor of 140 million.

That sounds small, but not when dealing with planetary orbits.

The Earth, for example, is 93 million miles away from the sun, more or less. As Kramer notes on the website, the orbit isn’t an exact circle; sometimes we’re closer and sometimes were farther away.

Divide 93 million miles by a factor of 140 million and you’ll see that in Kramer’s planet walk, the orbit of the Earth is a circle about two-thirds of a mile, or one kilometer, away from the State House dome. Do the same thing throughout the solar system: Neptune is about 20 miles away while Mercury’s orbit is so close that it won’t even take you across I-89.

“I started this five years ago. I’ve been looking for dome view locations (from orbits) for a couple years, and really went hard at it this year,” Kramer said. “I’ve discovered all these places in Concord I didn’t know about.”

He has placed 4-by-6 signs at many dome-view sites on orbits to discuss the size and speed of the planet. The sign for the sun itself is at Orange Leaf Frozen Yogurt, 70 N. Main St., with the top of the dome visible across the street. (The play “Wander” takes place in a yogurt shop.)

Signs are rare on the orbits of the outer planets. Kramer hopes some fans will help out.

“What I’d really like is for people to find me some further out-there sites,” he said. And to prod their assistance, he offers the coin of the realm these days: “If someone finds me an outer-planet view, I’ll send them a Wander T-shirt!”