T-minus three and counting to eclipse! (Years, of course) 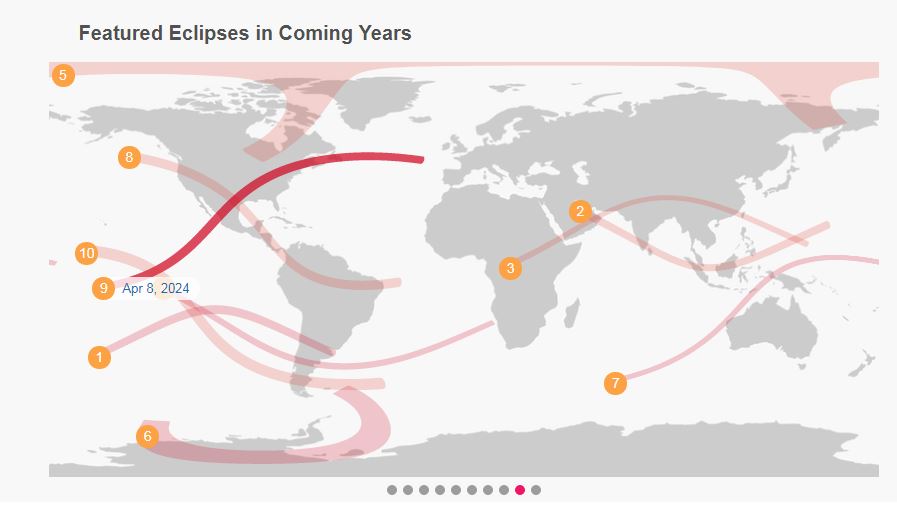 Number 9 is us. Number 8 is an annular eclipse that will arrive six months earlier.

Three years is a long time to look ahead in an era when most of us can’t see beyond getting that second vaccine shot (on Thursday for me – hooray!). But it’s not too long if you’re an eclipse fanatic.

“The hospitality industry, they need to be preparing! We’ve got to figure out a way so when people are calling two years ahead of time, you’re not turning away business – we don’t want all those people going to Maine and Vermont!” said Rik Yeames, looking ahead to the April 8, 2024, solar eclipse that will cut through Coos County.

That cheerleading status isn’t quite so unofficial anymore, since he was a panelist on a Solar Eclipse Task Force conference held by the American Astronomical Society last weekend to help prepare for the 2024 eclipse as well as a solar eclipse that will run from Oregon to Texas in 2023.

Yeames has been trying to get legislation passed so that Gov. Sununu would sign a bill honoring the eclipse last Thursday, exactly three years before the eclipse, but pandemic schedule-twisting and increasing intransigence by some legislators scuttled that plan.

Have no fear, there’s something else to look forward to.

On Thursday, June 10, New Hampshire early risers can see a “sunrise eclipse,” in which the sun will be finishing up an annular eclipse as it comes over the horizon.

As you know, a solar eclipse happens when the moon is between us and the sun, casting a shadow that moves across the Earth for a few thousand miles. A lunar eclipse happens when the Earth gets between the sun and moon and our shadow covers the moon; they are visible for more than an hour to the entire nighttime half of the planet. Both types of eclipses happen once or twice a year on average, but far fewer people can see any given solar eclipse.

Annular eclipses occur when the moon’s is at the farther part of its non-circular orbit and doesn’t quite cover the entire sun, leaving a bright ring.

Yeames, noting that sunrise is 5:06 on June 10, plans to be at Hampton Beach “probably at 4:30, maybe quarter to five” to watch the sunrise annular eclipse. He’ll have some eclipse glasses if you meet him there – and make sure you don’t look at it without eclipse glasses, although I’m sure none of you are dumb enough to do that.

“The best place is when you have a good view to the east, all the way to the horizon,” he said. Being on the western edge of a big east-west lake is almost as good as being at the ocean. North-south lakes like Penacook and Newfound aren’t so hot because the opposite shore is too close.

The real moon-over-sun action will come in 2024 when a full solar eclipse will cross the country from Texas to Maine. In New Hampshire the full shadow will cross Lancaster, Stark, Northumberland, Milan, Dummer, Errol, Dixville Notch and Pittsburg at about 3:30 p.m.

You remember the excitement in August 2017 when we had a partial view (about 62%) of a solar eclipse. Yeames’ message is that it will be much better in 2024, as long as we are prepared.

Right now he’s worried about hotels, campgrounds and B&Bs north of the notches.

“Many are not open the month of April – mud season, slowest time of year. But you don’t want to be closed in April of 2024 if you’re anywhere near the eclipse map,” he said.

Another problem is that only national chains, if that, are set up to take reservations more than a year in advance.

Yeames is prodding the national Chamber of Commerce to alert the hospitality industry all along the eclipse path to upgrade their reservation systems. “Even if you’re just writing it in a notebook, you should be ready to take reservations when people call.”

Here’s another idea he’s got: The Summer Reading Program from libraries should be eclipse focused. “We’re getting a suggested reading list for the summer of 2023. Stephen King has two books where eclipses are in the plot – ‘Dolores Claiborne’, ‘Gerald’s Game’ – and it goes through Maine. Maybe we could get him to be part of it!”

If this happens, remember that you read it here first.