With good vaccine news but bad disease news, are we happy or sad? 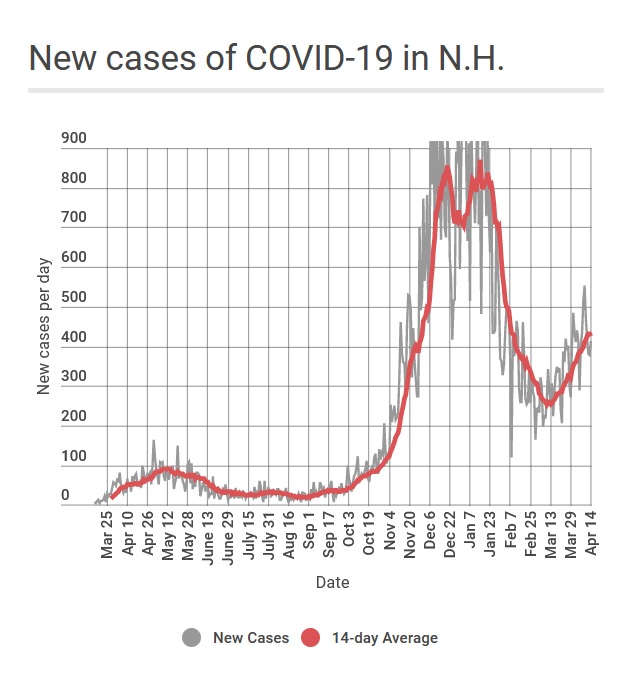 This ran Monday in the Monitor. By the time you read it in the newsletter, I’ll have gotten my second Pfizer vaccine.

In my age group virtually everybody has now gotten one COVID jab and many are in the “fully vaccinated” category, which has created a weird psychological dilemma: We can’t figure out how happy to be.

Obviously we’re happy to be vaccinated. Only a fool wouldn’t be, since we’ve been looking forward to it for a year.

But at the same time we can’t help feeling that it’s going to be a long time before we can reap the full benefit of this pharmacological marvel, which tempers our delight.

New Hampshire is doing quite well at vaccinating our population. More than half the people walking the street now have at least an initial vaccination shot, which provides some protection, or are among the 84,000 people (roughly the population of Nashua) who have recovered from COVID-19 and have natural protection.

This isn’t “herd immunity,” whatever that means, but it’s within shouting distance of it – astonishing when you remember the SARS-CoV2 virus was identified less than a year and a half ago.

So why aren’t my friends and I happier?

Because New Hampshire’s new-case count is going up as quickly it did in October when the winter surge began. The two-week average of new cases has gone from 262 one month ago to 424 on Sunday. Just as bad, the positive rate of PCR tests has more than doubled in recent weeks, getting alarmingly close to the 5% figure that is often seen as a benchmark that the virus is spreading out of control.

Serious cases are rising, too: More than 100 people have been in the hospital with COVID-19 all week, something that we hadn’t seen since February. The death rate is a bright spot, since it has finally fallen down to under two a day, but even there improvement seems to be stalling out.

It confuses us when good vaccine news goes hand-in-hand with bad disease news, especially since we don’t know the reason.

Is this the result of more-contagious variants that have exploded in places as disparate as Brazil and British Columbia? Maybe, since there is evidence that the B.1.1.7 variant (the U.K. one) is more contagious among younger people.

Only 206 cases of B.1.1.7 variant have been identified in New Hampshire so far, but it’s not clear how much testing for variants we’re doing among the 9,000 or so COVID tests that are reported each day. If you don’t test for something you don’t really know if it’s there or not.

Then there’s B.1.351 (the South Africa variant), which seems able to sneak around some vaccines. It’s not listed on the state’s ongoing report of  COVID variants so we don’t know if it’s part of the problem.

Or maybe it’s the Brazil variant or the California variant or a pattern of contagion we don’t yet understand, or the fact that certain groups have been ignored – minority groups, not-born-here college students, prisoners – which helps the virus keep replicating.

But whatever the reason, there’s a deeper issue: New Hampshire’s not an island. Protecting ourselves isn’t enough.

As long as the virus is raging in other parts of the world, new variants can arise, and as long as we interact with the world we are at risk of getting re-infected.

No wonder I’m not happier! But I still can’t wait for my second Pfizer jab.

Daily updated charts and other information can be seen on the Monitor’s COVID-19 page at www.concordmonitor.com/Special-Sections/Covid-19.