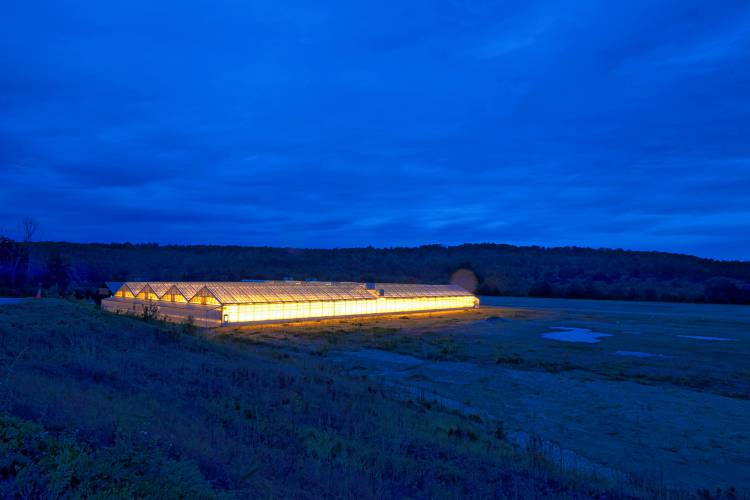 The Lef Farms is illuminated at dusk on September 27, 2021. Lef Farms opened its hydroponic, automated greenhouse in 2017 on a former gravel pit on Route 106 in Loudon. Geoff Forester - Concord Monitor staff

There’s nothing new about growing produce for New England markets inside a big greenhouse, but the huge expansion coming to Loudon’s high-tech hydroponic operation reflects not only the industry’s growth but also this unavoidable fact: California is a long way away.

“New England is the largest market for indoor-farmed salad … because this corner of the U.S. is furthest away from what we call the salad bowl on the West Coast,” said Abby Prior, chief commercial officer for New York-based Brightfarms, which recently purchased Lef Farms in Loudon.  “We want to replace the long-distance supply chain salads that come from California, Arizona, Mexico. …. Consumer demand for fresher, local products … is so strong that the industry cannot keep pace with the demand. Our farms are fully sold out, and many of our competitors are, too.”

Lef Farms, pronounced Leaf, opened its hydroponic, automated greenhouse in 2017 on a former gravel pit on Route 106. Brightfarms, which owns six similar greenhouses throughout the East Coast, hopes to triple its size by the end of 2022 and eventually expand the amount of growing space from 1 acre to 14 acres, Prior said. Up to 70 people could be working there when all is said and done.

She acknowledged that light shining out of the warehouse has been an issue with neighbors in the past, and that containing the problem would have to be part of the company’s design.

“We’ve learned a lot over the last 6 ½ as to being a good neighbor,” she said, describing the use of “blackout curtains” on greenhouses after sunset.

Brightfarms is still in the design phase and has not applied for any changes to its Loudon property. It owns enough land to make the planned expansion.

Prior said the company will keep the Lef Farms brand for at least the time being, and continue selling to supermarket chains, from Market Basket to Hannaford to Whole Foods. The curbside direct-to-consumer sales that Lef Farms tried during pandemic lockdowns are not part of their current model.

Investors seem to agree that Americans’ desire for fresh produce – meaning produce that isn’t trucked too far and can be grown with emphasis on taste rather than ability to withstand rough handling – is boundless. Last year Brightfarms raised $100 million in Series E funding and last month Cox Industries, a $20 billion conglomerate, bought a majority stake in the company.

While attention often focuses on so-called vertical farms, which depend entirely on artificial light to grow crops, most of the production and investment involves greenhouses that use sunlight as well as supplemental lights to speed growth, such as Lef Farms.

These aren’t traditional greenhouses, however. Crops are almost always grown hydroponically, in a liquid medium rather than soil, and processed with automation. This requires large up-front expenditure compared to a traditional farm, which is why the industry is focused on niche, high-cost products such as baby greens for salads.

“As the farms get larger and growers start to reap economies of scale, you’re going to see offerings that encompass the full salad category,” said Prior. “In in time you’ll also see a wide variety of other produce.”

She pointed to bell peppers and tomatoes, whose market is already dominated by traditional greenhouses down South and in Mexico, as likely candidates. Backyard Farms in Maine has been selling greenhouse tomatoes in New England for more than a decade.

A less obvious candidate: Berries. “They are highly perishable and have high value,” Prior said.

In Berlin, a subsidiary of Massachusetts-based American Ag Energy plans to create a 22-acre hydroponic greenhouse on a former landfill.

Brightfarms’ closest greenhouse is in Pennsylvania. Prior said the company would like to add one in southern New England to better serve the New York area.