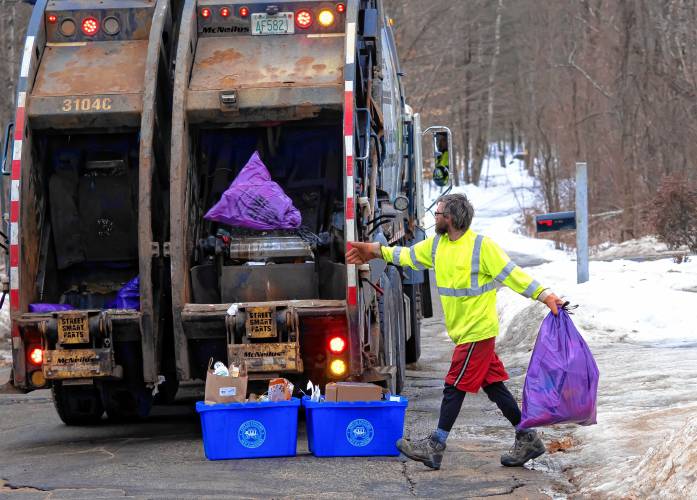 Michael Duclos of Casella Waste Systems tosses in a purple bag as he holds another on the pickup route on Elm Street in Penacook on Thursday morning, February 17, 2022.

The environmental benefits of Concord’s pay-as-you-throw program, which charges home owners for curbside trash collection but not recycling collection, are obvious.

The city says the volume of trash it sends to a landfill or incinerator has fallen by over 40% since this program began in 2009, and points to industry estimates that the average pay-as-you-throw community uses 2/3 fewer trash bags than places without that mandate.

But Concord household trash is still going to the landfill in plastic bags – lots and lots of plastic bags. Wouldn’t it be better if those purple bags were biodegradable or compostable?

Not really, says a city analysis, because we’re not geared up for it.

“If we had waste streams collecting organic material that could be composed, separate from inorganic, then looking at biodegradable bags would make sense. But in the most part in New Hampshire all non-recycled material either ends up in a landfill, which is anerobic and doesn’t lend itself to compost at all, or a thermal energy plant,” said Chip Chesley, director of General Services, which includes the solid waste department.

Chesley and Adam Clark, the city’s administrative division manager, recently discussed the issue in a report to City Council and recommended against the switch. The council accepted the report.

Clark said the report was spurred by resident interest.

One problem with the idea of switching is cost. Chesley says WasteZero, the company that handle’s the city’s pay-as-you-throw program, could offer biodegradable bags but at twice the price: $333,000 a year compared to $167,000. They wouldn’t be purple, either.

Then there’s the question of environmental benefit.

Landfills compress material to fit in as much as possible, so little oxygen gets to the interior. This means that the oxygen-breathing bacteria which break down biodegradable or compostable material can’t live, so the material stays unchanged. Even food scraps last for many decades inside modern landfills – the same would happen with biodegradable bags.

In general, it takes a specially designed facility to make compostable material actually compost. The city’s curbside leaf collection, for example, is taken to separate areas and laid out in long rows, where they get occasionally turned, in order to break down into mulch.

The report to the City Council says the company downplayed the environmental benefits even if the bags could decompose. The current polyethylene bags are a byproduct of natural gas extraction “which, if not used for this purpose, may otherwise be burned off. … There is a strong belief within WasteZero that … a switch to non-polyethylene bags would require the production of new raw materials but would not reduce the amount of polyethylene raw materials produced.”

Clark, who is an owner of Adelle’s Coffee House in Dover, said he wrestles with these questions in offering compostable cups.

“I’ve always struggled that when a compostable cup leaves my coffee shop, it might get thrown away in the trash. There are environmental benefits relative to the production of the cup – but the biodegradability, you lose that benefit in the landfill.”

The subject of biodegradable or compostable bags and other material, often called bioplastics, is controversial. While their production does not involve petroleum – many are made from corn or other plants – they often don’t live up to their labels. Compostable flatware like forks and knives have proved to not actually break down so often that they are frequently banned by composting facilities.

Furthermore, even truly compostable cups, bowls and plates are sometimes made with PFAS or similar “forever chemicals,” which are needed to keep out moisture while the items are being used. These chemicals can contaminate the final compost.