At least we don’t have to worry about ticks in winter – oh, wait, yes we do 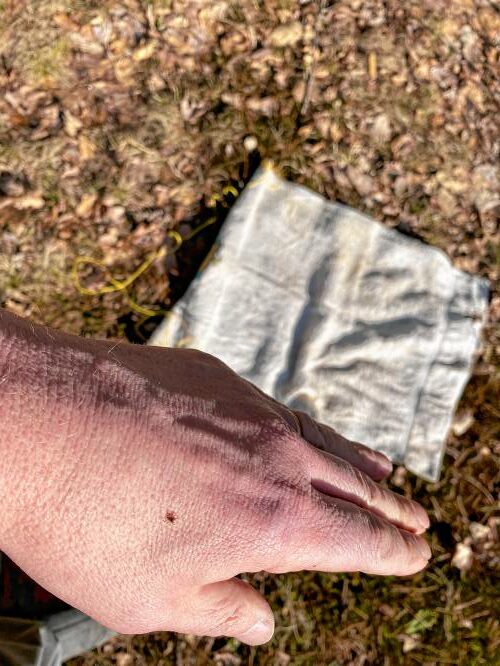 If I was a real photographer I would have made sure Big Bird was visible on the towel in the background.

In the name of science and of informing you, dear reader, I spent a half-hour last week walking up and down my yard dragging an old towel embroidered with Big Bird’s face.

The goal of this inelegant activity, done before Friday’s snowstorm, was to test a statement that I have repeated many times over the years but never actually confirmed: that ticks become active any time the temperature is above roughly 42 degrees Fahrenheit, no matter the time of year.

I’ve always been slightly suspicious of this because ticks, like all bugs, seem like warm-weather beasts. Surely they can’t emerge so quickly from a New Hampshire winter, can they?

I figured a sunny February day with the temperature at 50 degrees was as good a time as any for a test. So I grabbed an old kid’s towel from the rag pile, stapled it to a piece of wood, made a handle with string and dragged it behind me as I strolled back and forth in the yard, maneuvering around the remaining patches of icy snow.

This is known as “tick dragging” and it is the standard method for field research. It works because in a process called “questing,” ticks will instantly grab any passing object they get their little hooks into, even a Big Bird towel.

They do not, despite what you may have heard, jump on us or drop down on us from overhead trees. They just wait and grab. That’s all they need to do.

A side note: I’m going to try tick dragging as a preventative measure this summer before having guests over to eat outdoors. It’s no tick prevention but it seems like it could lower the threat for an afternoon without spreading pesticide.

So what did my half-hour tick-dragging session find?

Here’s the good news: When going over the grass I picked up no nasty disease-carrying arthropods.

Here’s the bad news: When I moved to fallen leaves alongside the garden bed, I almost immediately picked up a crawling bugger that on close inspection proved to be a black-legged tick, the kind that carries Lyme disease.

You can see it on my hand in the photo, taken right before I squished it with a knife blade on a rock. The photo also shows my collection towel on the ground, although Big Bird is hiding.

So there you have it. I’ve done my own research and yes, it’s just like the experts have warned us. We have to be wary of ticks even in mid-winter whenever it gets a little bit warm. They’re mostly lurking in leaf litter and other places that protect them from drying out (when you’re as flat as a tick, desiccation is a life-threatening condition) rather than exposed in the open yard, but they’re there.

Depending on whether they’re black-legged ticks or American dog ticks or lone star ticks, a southern species that has started to show up here, they’re probably carrying some disease that can be transmitted to us via their bite. Lyme disease is the most common, of course – Maine, Vermont and New Hampshire have the highest per-capita rates of Lyme of any state – but increasingly there’s babesiosis and anaplasmosis and Rocky Mountain spotted fever and even a weird meat allergy to be worried about.

So I’m sorry to say that even in winter we need to practice tick prevention measures unless the ground is covered in snow. Sorry to yet again be the bearer of bad tick news.