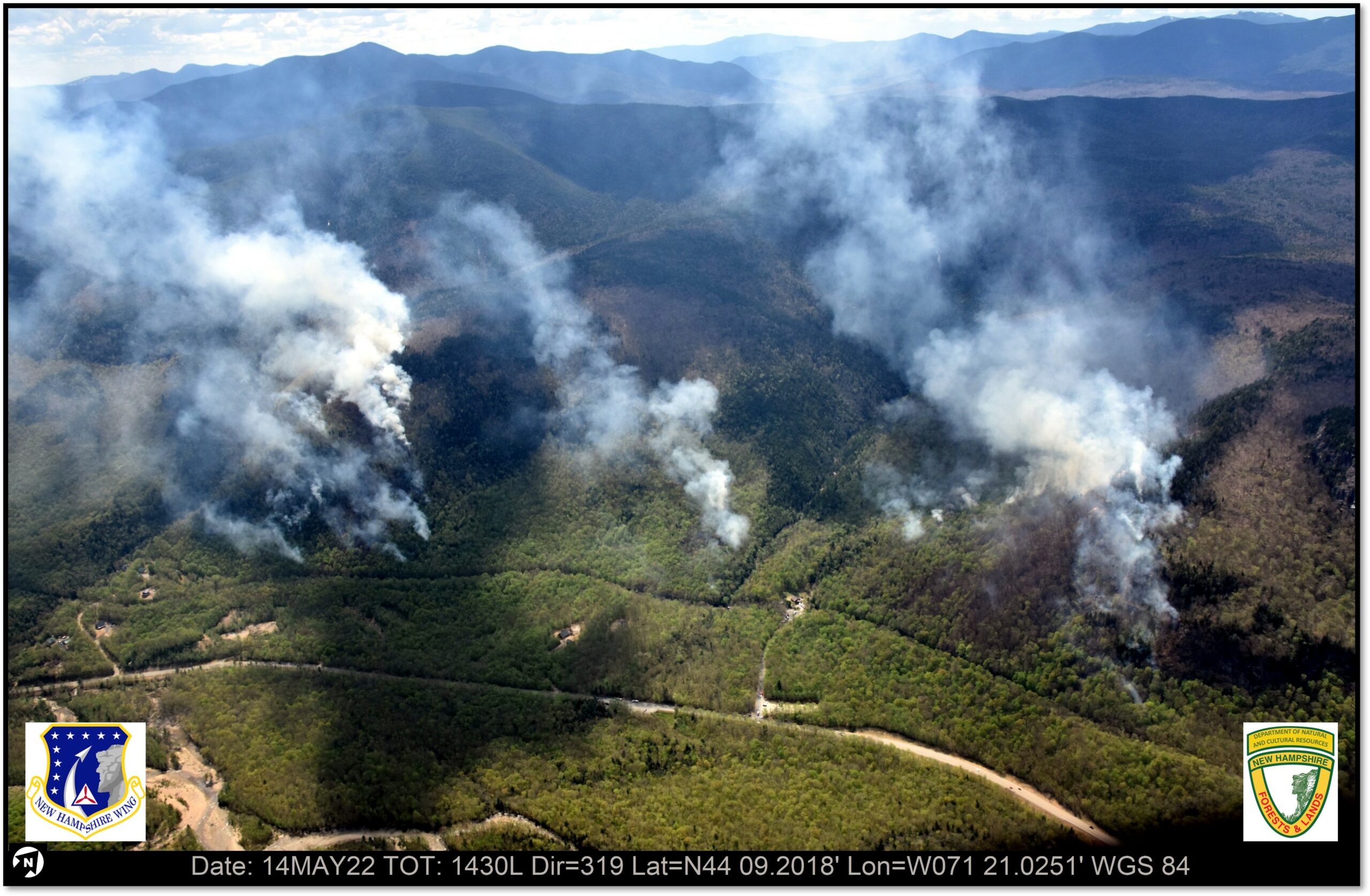 The Bevis fire as of May 14, taken by NH Civil Air Patrol. Camera is looking approximately south; Route 302 is in front.

Of all the shocking weather emergencies we’ve seen in recent years, the one that really made the hair stand up on the back of my neck was last July’s wildfire that destroyed an entire town in British Columbia.

That out-of-nowhere disaster hits home in New England because British Columbia feels like the west coast’s equivalent of Maine. It’s got a few cities and some beautiful mountains, but mostly it’s lush forests thriving in a cool, wet climate with lots of rain and snow.

Seeing British Columbia weather soar to 121 degrees and fuel a rampaging fire that destroyed an entire town the size of Center Harbor was shocking because it means our weather could do that, too.

Suddenly I find it more worrisome to hear about New Hampshire’s relatively small and rare wildfires, like the pair that have shut down North Country hiking trails this month or the 2017 Dilly Cliff fire that might have been (but wasn’t) caused by a meteorite. It feels like they are becoming less small and less rare as harbingers of much worse things to come.

May being Wildfire Awareness Month, I decided to test this hypothesis on Patrick Hackley, director of the N.H. Division of Forests & Lands.

His first response: No, British Columbia is not Maine.

“We’ve got a different weather pattern, different forest – much more hardwood – and they have a decent amount of drought,” he said.

But Hackley agreed that changing weather patterns caused by accelerating climate change is raising the possibility of wildfire in New England. It’s also making it harder to predict New England’s future wildfire danger, and therefore how best to manage our woodlands.

“There’s plenty of debate and discussion and thought that’s going into what climate-friendly forestry actually is,” he said.

Hackley pointed to the state’s Forest Action Plan from 2020, which includes this statement:

“Another topic that played only a minor role in the last plan, but was much more prevalent during this planning process, was the role of climate change and its influence on the future of our forests and general ecosystem health. While the science of climate change is still developing, it is unclear what type of scenarios we will be facing in the future based on different carbon output models. What is known is that it will be an additional stressor on our forests.”

Should we be doing more prescribed fires to get rid of fuel on the ground? Less timber harvesting? More harvesting but in different patterns and timing?

Maybe we need active planting programs of the sort done for the timber industry a century ago but with ecosystems in mind? Or a push to establish southern trees here in anticipation of increasingly mid-Atlantic-ish weather? Or maybe we should keep our hands entirely off forests in hopes it will maximize carbon uptake?

These are all good questions with no obvious answers, partly because it’s not clear where weather is going. Historical trends that have always guided us are increasingly irrelevant as once-in-a-lifetime weather events occur over and over, and it’ll-never-happen-here disasters become possible.

As one person put it online, “Unprecedented is the new precedented.”

The unending disastrous fires out West are forcing everybody to take the issue more seriously. A company called First Street Foundation, long known for mapping flood risk, has just released its first wildfire risk map for the country including data that will be factored into some home sales and insurance premiums.

Encouragingly, virtually all of New England is at the lowest level of risk compared to the rest of the country – but as British Columbia found out, that isn’t the same as no risk.

The Northeast-Midwest State Foresters Alliance has a wildfire “risk explorer” for 20 states from Missouri to Maine at https://northeastmidwestwildfirerisk.com/ that includes an interactive map estimating risk down to city-block size parcels. It can’t tell me if I need to cut down trees near my house to protect myself but it’s the next step toward dealing with the realities of our ever-more-climate-altered world.