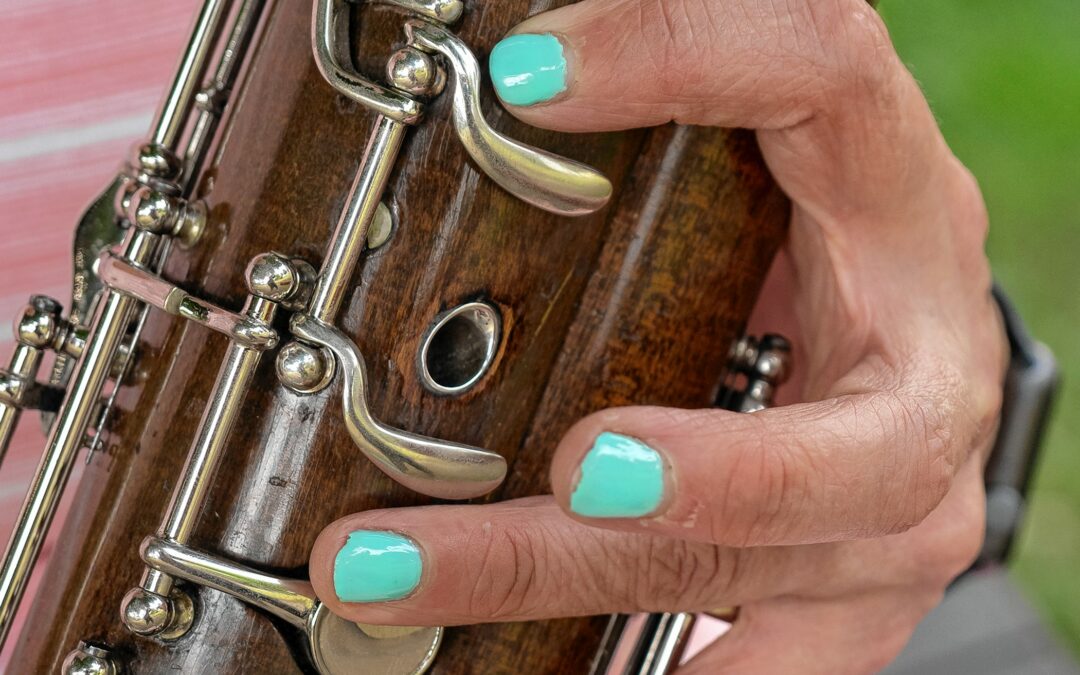 Maria Isaak at Concord Community Music School says that the bassoon is both expensive and difficult to play.

The last couple of years have seen such a parade of problems that it’s hard to be surprised by them any more. Even so, here’s a problem you probably haven’t thought of:

New Hampshire is facing a shortage of bassoon players.

A combination of factors made worse by COVID is hitting the biggest member of the woodwind family hard. Just ask the folks organizing All-State school orchestra.

“Typically we have 12 to 20 bassoons players auditioning for six spots. This year it was four,” said Janet Polk, a UNH resident artist who plays bassoon in two orchestras.

Polk recently lamented online about the lack of bassoon players coming out of high school, drawing commiseration from other fans of this beautiful but famously difficult instrument.

“I teach oboe at UNH – had only two students this year,” said Maria Isaak of Concord Community Music School.

Mind you, bassoon players have never really been numerous, a fact that Isaak once used to her advantage.

“I went to the New England Conservatory of Music on a full scholarship for bassoon. No amount of hard work on the flute would have given me the full scholarship on that instrument,” she said, chuckling.

Polk and Isaak said there are many reasons for bassoon-player scarcity, starting with cost. A good student bassoon costs around $5,500. The instrument is also big – about 4 ½ feet long, although if unfolded it would be almost twice as long.

Further, in most orchestral arrangements it is a supporting instrument, providing resonant harmonies rather than the ear-catching melodies which interest beginning students.

“It doesn’t tend to be viewed as a solo instrument; there are not many classical concertos written for it,” said Polk. “It’s more a social instrument.”

But perhaps the biggest issue is that the bassoon is not easy to play. For one thing, it is a double-reed instrument, with twice as many of the vibrating wooden reeds that made music possible than are found in woodwinds like the clarinet and saxophone, meaning twice as many chances for things to go wrong and to require buying a new reed.

“The entire tuning is with embouchure, the way you shape the muscles in your mouth, you have to have a good ear more than flute or clarinet,” said Isaak.

All this means that for somebody in middle school, deciding to learn bassoon “is a hard start,” Isaak said, turning to an automotive metaphor: “It’s learning a stick shift instead of an automatic.”

“It was love at first sight. I thought it was just the most beautiful thing I’ve ever heard,” said Polk, looking back on her introduction to the bassoon in school. “Those strange cow-like sounds, the low tone, the reediness. It’s a very visceral experience – you could see the wood vibrating under your fingers! All that stuff just made it irresistible.”

The bassoon is often called the most versatile of the woodwinds since it has a three-octave range, although the high notes are particularly difficult to play, and its warm vibrato has drawn comparisons to the human voice, as it if was a baritone singer in tubular form.

Not the only shortage

The bassoon isn’t the only orchestral instrument facing a shortage of new players in New Hampshire. Polk and Isaac pointed to the oboe, bass clarinet, French horn and string bass as other orchestral stalwarts having problems. All of these instruments are expensive, not easy to play, and rarely given the soloist limelight.

They often get short shrift from overwhelmed band and orchestra instructors in middle school who are hard-pressed to meet the needs of all the kids who want to try the popular instruments – especially since band programs are often overwhelmed and rarely have bassoons in the building, meaning students need to rent one.

“They are stretched,” said Polk of public school band programs. “I’ll hear from a trumpet-playing band director who says I just don’t have time to teach a sixth-grader (bassoon) – who didn’t even have time to find someone to teach them.”

And then there’s COVID. Two years of not being able to gather in a room to try out instruments or practice has devastated music programs of all kinds but has been particularly hard on instruments that require lots of help to get started. This really shows up in contests like All-State, which was canceled in 2020 and in 2021 had online auditions via Zoom or the equivalent before this year’s return to in-person auditions.

“This year, it had 60 cancellations week of (auditions),” said Isaak. “Kids learning online did not show up. Just a lot of kids had not played in person for so long. … This year I was supposed to listen to five students, only three showed up. The same thing with French horn this year – we had to pull in college students.

“Every music program I know, nationwide, all their numbers are cut in half at least.”

“When Benny Goodman was playing, suddenly there was a huge surge of interest in the clarinet,” mused Polk. Something similar happened with the flute when it was played by Ian Anderson of the rock group Jethro Tull in the 1970s. “What we need is a pop musician who plays the bassoon. Then everybody would think: It’s so cool!”