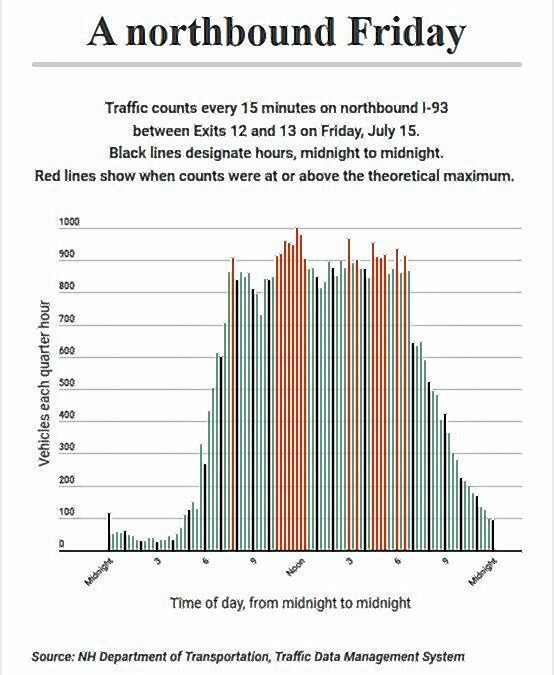 (Note: This is the first article of a two-parter, as cleverly shown by the ellipses in the headline. The follow-up is here.)

It’s time for another holiday weekend, which means it’s time for Concord residents to tear their hair out trying to get from one part of the city to another without touching the parking lot called Interstate 93.

Not that this annoying reality is limited to holidays.

Any Friday (northbound) and Sunday (southbound) in the summertime or when skiing is good or during leaf-peeping season will see the turnpike through the city clogged with folks going between up there and down there. Locals have only themselves to blame if they forget and take the wrong on-ramp at the wrong time.

This has been the situation forever. The Lakes Region is an obstacle to north-south traffic, so most of it travels alongside the Merrimack River. First wagons, then trains, then cars and trucks have had to pass through Concord, whether carrying trees, tourists or trash and treasure, with an inevitable crush at certain times.

But judging from reader comments the Monitor heard during a recent writing workshop, some people think it has gotten worse recently. Has it? Let’s see.

Let’s do the numbers

I’m going to look at numbers collected by an automated counter between Exits 12 and 13, a point that gets clogged whether you’re talking northbound or southbound crowds. There’s also a technical reason to choose this counter, which I’ll get to later.

Happily for work-from-home geeks, New Hampshire Department of Transportation has something called the Transportation Data Management System, or TDMS, an online portal that compiles data from traffic counters throughout the state. You can find it by searching for the name; the URL is too complicated to write out.

The average number of vehicles passing the counter each day in both directions was 77,332 in 2019, almost exactly what it had been the previous two years. Then the pandemic hit and traffic counts fell by one-fifth to 63,860 in 2020. (Remember those glorious few weeks when you were the only car on the road?)

Last year, the average rebounded about halfway back – to 71,279. We don’t have an annual average for 2022 yet of course, but daily counts have risen since last year, so I suspect the annual average for this year will be almost back to where it was in 2019.

Annual averages can only tell you so much. Let’s look closer.

The TDMS compiles traffic counts day by day but doesn’t calculate averages for different days of the week, so I crunched them for our summertime traffic.

In northbound lanes between Memorial Day and Aug. 15 this year, I found that Sunday was, not surprisingly, the slowest day of the week: Just 32,197 cars went through on an average Sunday.

Traffic rose steadily each day of the week – from 39,646 on the average Monday to 45,720 on Thursdays – before jumping to almost 51,000 on the average Friday. That’s roughly 55% more traffic on Friday than Sunday.

For southbound summer traffic, the slow day was Saturday at 37,155 and the busy day was Sunday at 42,455, followed closely by Monday at 41,266. Both of those busy days, you’ll notice, saw less traffic than the northbound Friday crush. Obviously, everybody rushes north to start the weekend ASAP but delays their return south if they can.

Now the question at hand: Have these crush days gotten worse?

For various reasons, I couldn’t do similar day-of-week calculations for earlier years, so I chose a high-traffic but non-holiday day as a representative sample.

For northbound traffic, I took the third Friday of July.

For southbound, I took the second Sunday of July. In both cases, it was the weekend before the big NASCAR race in Loudon, which seriously clogs up the roads.

So the answer is still no. Traffic has not gotten worse compared to before the pandemic. It’s slightly less bad.

One reason for choosing this particular traffic counter is that it registers counts every 15 minutes, the gold standard for traffic engineers. New Hampshire has just started rolling out this ability to its counting network.

Looking at these quarter-hour slices provides some advice about the dance Concord residents do if they want to use this enormous swath of concrete and asphalt cutting through the city when it’s busy.

Looking again at Sunday, July 10, the data shows the huge variation in southbound traffic during the day. Just 20 vehicles passed this point going south in the quarter hour starting at 2:45 a.m. while 1,030 vehicles went by from 11 to 11:15 a.m. That’s a 60-fold difference!

More importantly for us, the data pinpoints the exact moment when locals should abandon southbound I-93 on a summer Sunday: 8:45 a.m.

Northbound is a similar story but it starts earlier, thanks to the rush-to-vacation habit.

In other words, just stay out of the northbound lanes between sunrise and sunset on any Friday in summer. You’ll be glad you did.

One other point: The quarter-hour data shows why things bog down – too many cars. The rule of thumb for traffic engineers is that a limited-access highway can handle 1,800 cars per lane per hour in one direction. That’s 900 cars per 15 minutes for the two-lane I-93 in each direction.

Yet 17 times during the Friday I examined, the northbound traffic exceeded 900 cars per 15 minutes. When the highway is that full of vehicles the tiniest little problem, like somebody doing a bad job merging, will bring everything to a screeching halt. As it does.

Is there a fix?

You’ll notice that earlier I said weekend thru-traffic is getting “less bad.” Because if you want to use the highway to get around in Concord, it’s still bad.

But there’s a proposed fix in the works. It’s the suggested widening of I-93 through the city with an extra lane in each direction, plus tweaking of exit ramps including the first one on I-89 in Bow.

It will be a pain in the neck for Concord, involving perhaps a decade of construction delays, and cost a fortune – at least a quarter of a billion dollars – but holds out hope of ending, or at least easing, all those backups.

The question is: Will it?

I will discuss that question in my column in Tuesday’s Monitor, using data from the TDMS to help me reach an answer.

I’ll also give my opinion about whether I think the project is worth it. (Spoiler alert: No, I don’t, but there’s room for debate.) See you then.