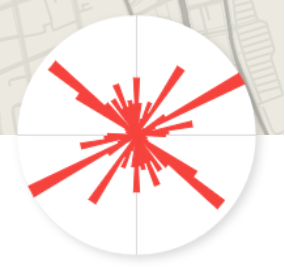 Thanks to digital mapping, it’s possible to calculate how grid-like any city’s street layout can be. This story in The Economist explains it:

I played with the graphic representation of city layouts for some New Hampshire cities and found that Manchester appears to be our grid leader. Its layout looks like this:

Pretty griddy. Nashua’s pattern reflects its split by the Nashua River running east-west through the middle:

Portsmouth, constrained by all that water is pretty screwy:

As for Concord’s grid – it’s the incoherent splat shown at the top of this article.