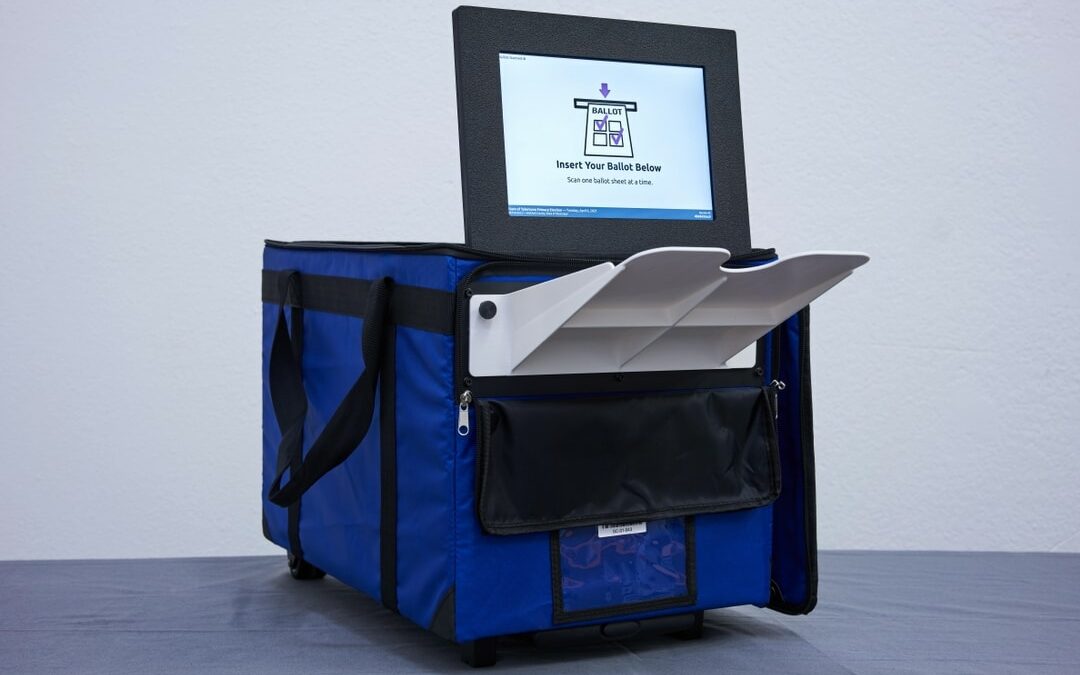 A VotingWorks machine. The paper ballot, previously marked by pencil, is placed on the tray, drawn into the machine and read. The screen tells voters whether any errors were found.

The open-source software worked well but the hardware had a few issues.

That’s the conclusion from audits of a new ballot-counting machine that was tested in three New Hampshire towns during the November election. The device, developed by a nonprofit called VotingWorks, is being considered as a possible replacement for the state’s aging AccuVote machines.

The key point of the VotingWorks device is that it uses the open-source Linux operating system rather than software controlled by a private company. Its backers say this openness provides a level of transparency that can help defuse conspiracy theories about fair elections.

Any decision about changing the devices that towns and cities can use for elections will be made by the Ballot Law Commission, a 10-person body whose members are appointed by the legislature and the governor. There is no timeline for replacing the AccuVote machines.

The VotingWorks machines were used in the Nov. 8, 2022, election in Ashland, Newington and Woodstock, three of the smallest towns in the state that count ballots with the AccuVote machines. The VotingWorks devices digitally scanned and tallied results from the state’s standard paper ballots. The  results were later double-checked with a hand-count audit by the Secretary of State’s office.

“The Audit Team found that the audits of the VotingWorks ballot counting devices used in Ashland and Woodstock were successful, and results were within expected margins. The VotingWorks ballot counting device in Newington did not take place as the device was ultimately not used on Election Day,” concludes the group’s report, issued Tuesday. It can be seen on the Secretary of State’swebsite, www.sos.nh.gov, via the “VotingWorks Audit Report” link.

The VotingWorks machine in Newington was pulled because it kept rejecting ballots for no obvious reason, the report said. Voting proceeded using the town’sAccuVote machines.

The problem in Newington was eventually found to be “due to a physical obstruction on the portion of the device that scans the ballots and was fixed by cleaning the sensor glass with a microfiber cloth.”

The report said the Woodstock machine suffered a paper jam that “proved difficult to remove, in part due to the location of the paper jam and in part due to the number of seals that needed to be broken and subsequently reinstalled on the ballot counting device,” but that didn’t delay voters and the machine was used for the entire election.

In terms of results, the hand count and the VotingWorks tallies of all races in the three towns were within one or two votes of each other. The hand count, for example, removed one vote from Chris Sununu for governor in Woodstock. In Ashland the audit switched two votes out of about 900 from OmerAhern to Marcia Morris in the race for county commissioner.

The audit also found some differences determining whether a ballot had overvotes or undervotes – that is, whether the voter had marked too many or not enough candidates for a particular race. In Ashland, for example, VotingWorks said the executive council race had 46 undervotes and 2 write-ins, but the audit said there were actually 47 undervotes and 1 write-in.

VotingWorks is not the only company being considered as a replacement for AccuVote, but it’s the only one that uses open-source software, where the underlying code can be examined and tested by anyone.

“The hope is this will give some confidence to voters that have questions and doubts now,” Secretary of State Dave Scanlan has said about open-source software. “To the extent that parts of the process aren’t transparent, that allows people to use their imagination … about what is happening.”

VotingWorks machines are used in elections in several Mississippi counties.