America’s Stonehenge – steeped in history, but what kind of history? 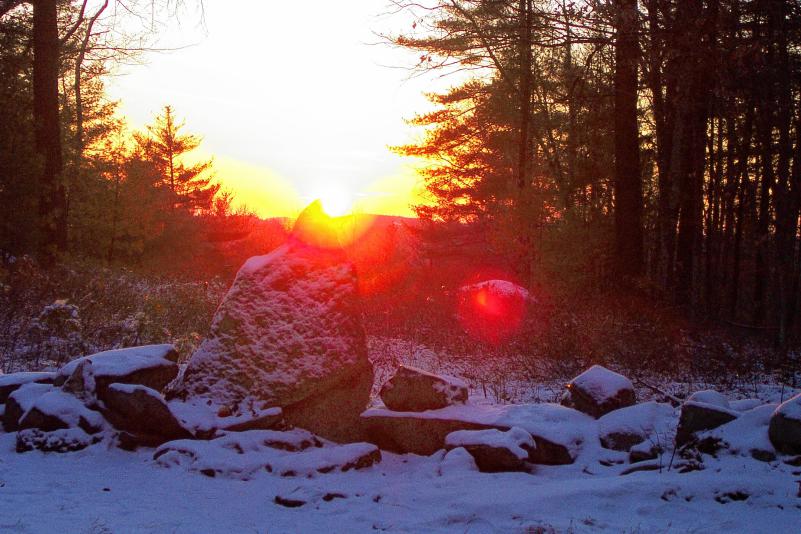 This is a sidebar to a feature package I wrote for Sunday’s Monitor about winter solstice celebration at America’s Stonehenge – I thought it would be the piece of most interest to GraniteGeek readers:

Fans of America’s Stonehenge will tell you that the site predates Europeans by hundreds, maybe thousands of years, but unfortunately there’s no evidence to back them up.

It would be cool to think the chambers and “sacrifice stone” and other structures were assembled by Phoenecians or Vikings or Celts, as various folks have suggested, but over the years I’ve talked to a couple of archaeologists who have studied the site and say that everything is consistent with structures, created by Colonial and American farmers all over New England, such as cold cellars and quarry sites.

The biggest difficulty with understanding the site’s history is that in the 1930s, then-owner William Goodwin became convinced it had been home to Irish monks before Columbus arrived and moved some rocks, maybe lots of rocks, to reflect his belief.

Goodwin opened the place to visitors and called it Mystery Hill. The name was changed to America’s Stonehenge in 1982 by later owners, although there’s no connection to Stonehenge in England. (A “henge” is a large circular earthen structure of the sort built by many neolithic peoples; the Salem site doesn’t really have one, either of earth or stone.)

The best argument in favor of the pre-Columbus hypothesis at America’s Stonehenge came from the late Barry Fell, a marine biologist from Harvard University who claimed that markings on some rocks at the site are inscriptions written in ancient scripts.

The most damning arguments against the ancient-creation idea are two: The site has no trash such as broken pottery or burial sites or any of the other detritus always found at ancient sites of human habitation (that’s from Kenneth Feder, then a professor at Central Connecticut State University), and it’s not mentioned in the writings of any early European explorers.

Those folks wrote profusely about everything interesting they found in the New World. It’s hard to believe they’d come across the structure as it now exists and not go crazy.

As for that much-cited sacrifice stone, the carved channels that are claimed to have been used to carry away the blood of victims look exactly the same as channels carved in stones at farms all around new England by people who needed to drain away the lye while making soap, or who were pressing apples to make cider.

This news might be a wet blanket but to a certain extent it doesn’t detract from the site’s pleasures. The stones and stone structures, whatever their history, are very interesting to walk around, sit on and crawl inside of, and the surroundings are beautiful. Just don’t get carried away with your archaeological daydreams.