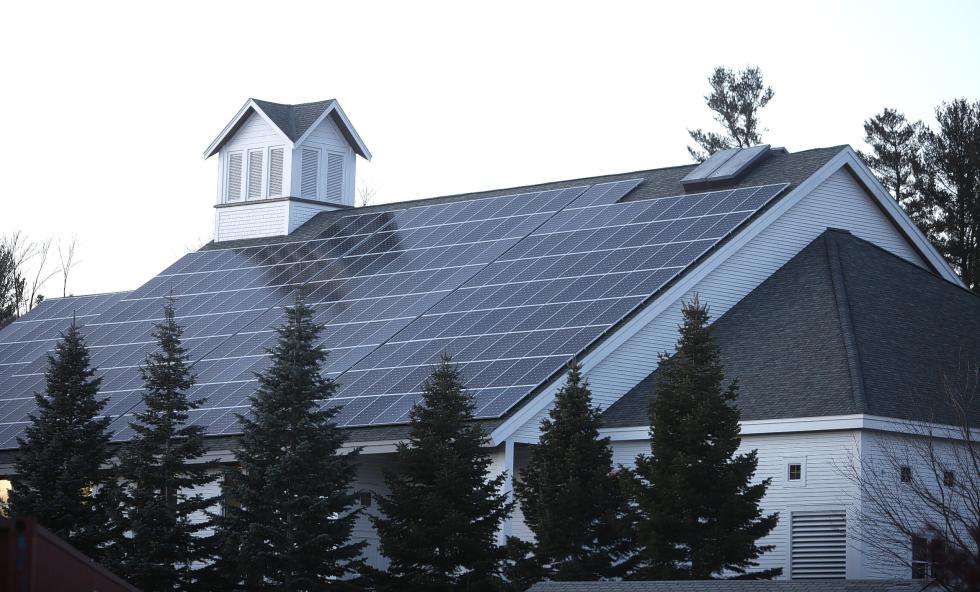 The gleaming solar panels at Proctor Academy that sit atop the Maloney Hockey Rink, the Alan Shepard Boathouse and next to the school’s ski area are technically complex, but financial complexity is what really brought them to life.

“What’s great about it for the host is that it allows them to go green without having to raise the capital,” said Steve Hinchman, director of financing for Revision Energy, which set up the power purchase agreement, or PPA, that made the $1.1 million, 334-kilowatt project at the school possible.

“There were essentially no upfront costs for the school. We don’t own the display,” said Scott Allenby, director of communications for Proctor Academy. “That was an important part of the decision.”

The photovoltaic panels atop the five buildings – as well as the ground-mounted array next to the ski area – will produce about 25 percent of the total electricity used by the co-education, board and day school each year.

They are part of the school’s push to reduce its fossil fuel use. Included in that push is the wood-chip-burning plant that heats about 70 percent of the campus, the cordwood that is cut on the academy’s property that helps heat some dorms, and geothermal heating systems that contribute to a net-zero-energy-use aspect of the new dining hall.

Hinchman said Proctor Academy’s route is one that makes sense for many government and nonprofit institutions, from town halls and schools to churches and soup kitchens.

“They understood this is an economic opportunity for the school. It essentially becomes an energy endowment to protect the institution,” he said. “They will be around, using electricity in 50 years. There’s an awful lot of rooftop in New Hampshire. They’re an ideal place to put solar, and protect an institution from volatile energy prices.”

Under a power purchase agreement, the host site buys the electricity produced by the panels, paying a negotiated rate that is usually slightly less than the energy charge of the local utility. The host site has the option to buy the panels outright after six years.

Because Proctor Academy has nonprofit status, it can’t enjoy the tax benefits of installing solar power. Under the PPA, the panels’ owner gets the benefit of a 30 percent tax credit, worth about $330,000 in this case, which makes it feasible for them to absorb the up-front costs.

The finances of the deal also depend on net metering, under which local utility New Hampshire Electric Cooperative pays full rate for any excess electricity produced by the panels, such as during a summer day when the ski area is closed and school is not in session. Net metering has run up against a cap of total capacity in New Hampshire – NHEC has already hit its limit, although Proctor Academy signed up before that limit was reached – making future solar deals less likely unless the cap is changed by the state government.

The topic of raising the net metering cap is likely to be discussed in Concord when the Legislature returns in January.

As the system stands, Hinchman said, the solar farm can be thought of as a way for the academy to lock in a cheap price for decades worth of power.

“They have the option to buy the system in year seven,” Hinchman said. “If you take that purchase cost, plus their cost of electricity in years one through six, plus operating and maintenance cost in years seven through 40, and divide that by 40 years of electricity production, the number you get is less than 6 cents per kilowatt-hour.”

A more indirect benefit goes to the gird.

“The power line goes to academy and stops there – it’s a dead-end system,” Hinchman said. “That’s a lot of infrastructure to feed the academy. This makes it less likely they’ll need to upgrade” if the academy’s electric grid needs to grow.

“It’s a way to stabilize the grid,” Hinchman added.

For Proctor Academy, which includes the solar panels in its publicity material, the benefit is more than just monetary.

“It’s a visual statement of our mission . . . to be environmentally responsible,” Allenby said. “Everything has gone smoothly. We’re very pleased.”