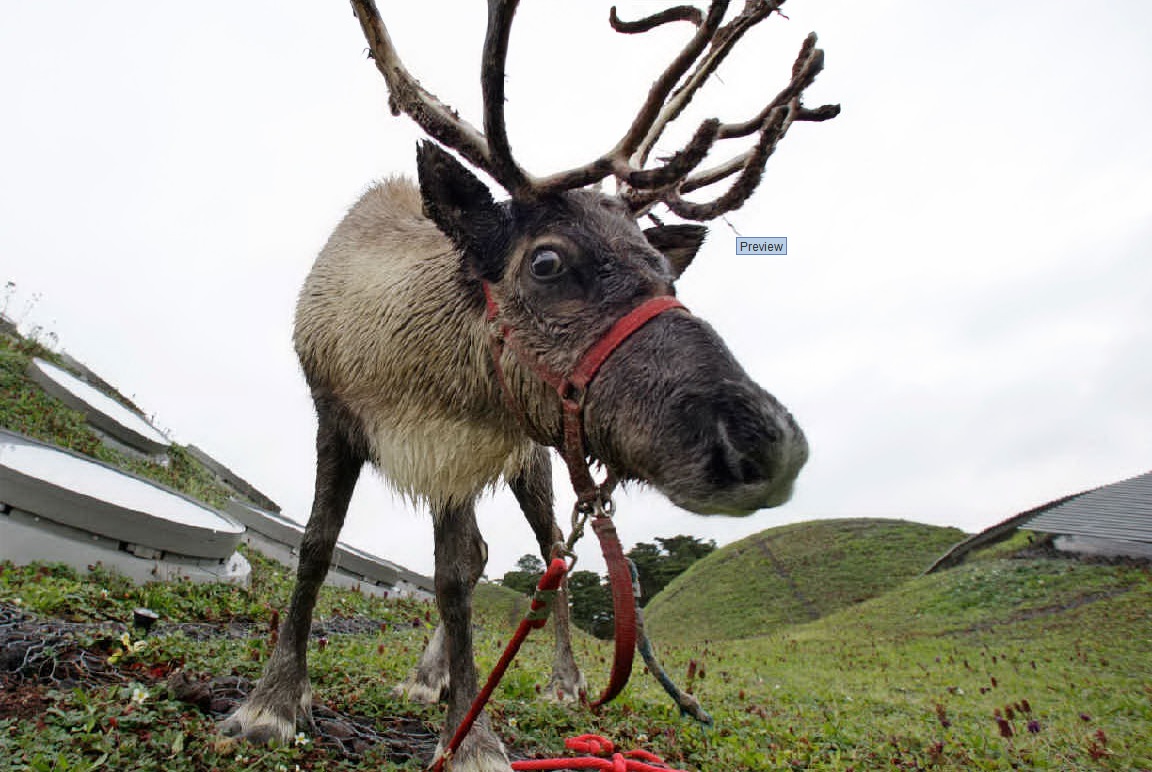 In this Nov. 23, 2010 photo, a reindeer grazes on the living roof of the California Academy of Sciences in San Francisco. (AP Photo/Eric Risberg, File)

By Holly Ramer, Associated Press: Everyone knows Rudolph has a red nose, but what about his eyes?

Prompted by questions from his 4-year-old daughter, Dartmouth College anthropology professor Nathaniel Dominy recently wrote a scholarly paper on how the unique properties of reindeer eyes might explain the advantage of having a very shiny nose, particularly if it produces red light.

Dominy, who specializes in primate vision, was already familiar with recent research on reindeer eyes when his daughter asked him about Rudolph’s nose. Scientists in Great Britain have discovered that unlike most mammals, reindeer can see ultraviolet light, meaning white polar bears or wolves that absorb UV light would stand out more against a snowy background. Reindeer eyes also include reflective tissue that appears to glow when light hits it – familiar to anyone who’s seen a pet or wild animal illuminated by car headlights. But in reindeer, the tissue changes from a golden color during the summer to a deep blue in winter.

“What happens is that at night, the animals are trying to dilate their pupils to allow as much light into the eye as possible, and because those muscles are so active, it actually blocks little valves in the eye,” Dominy said. “The pressure in the eye builds up and compresses that tissue in the back of the eye, which causes the refractive properties to change.”

While that change could boost an animal’s ability to spot food in the snow when daylight in the Arctic is dim and purplish, it would be a distinct disadvantage on a foggy Christmas Eve because fog blocks blue light, Dominy said.

Of all the colors, red light travels through fog fastest, making it ideal for guiding Santa’s sleigh. But there’s also a downside to red noses, he warns.

Other researchers have discovered that reindeer noses have a complex system of tiny blood vessels that prevent them from freezing but also results in a loss of body heat. “That’s bad. You want to retain as much heat as possible. If Rudolph has a very bright, glowing nose, he must have an unusually rich microvascular system, and he’s probably losing a ton of heat through his nose,” he said. “So Rudolph, more than other reindeer, is probably risking his life by losing so much heat.”

His suggestion? Skip the carrots on Christmas Eve and leave Rudolph some cookies instead.

“One way to heat your body is to burn fuel. You do that by burning fat and calories,” he said. “Children should be aware of Rudolph’s condition and leave high-calorie foods for him.”