Interesting job of the week: Net-gunning moose from a helicopter so you can study them 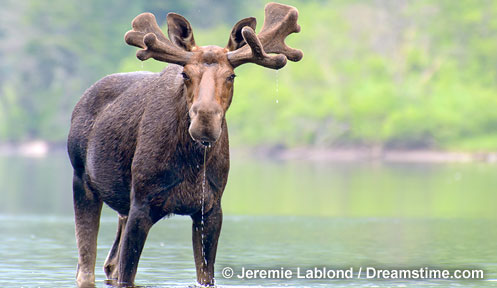 Residents in northern New Hampshire may spot a helicopter overhead in the coming weeks as approximately 45 moose cows and calves are collared for the third year of a six-year study of moose mortality and productivity. (You can see a video about the process at www.wildnh.com/wildlife/moose-study.html)
The New Hampshire Fish and Game Department and the University of New Hampshire (UNH) have contracted with Native Range of Elko, Nevada, to collar the moose. Activity will be weather-dependent and will begin once 107 cows and calves have been collared in Maine. Collaring in New Hampshire could begin as early as January 8.  Residents with questions can call Fish and Game’s Wildlife Division at (603) 271-2461.
The Native Range capture crew will use net-guns and tranquilizer darts to capture the moose so they can be collared.  Blood and other samples collected during collaring will help evaluate the health of the moose. The collared animals will be monitored for as long as the collars keep transmitting. For the next two years, students from UNH, which is partnering with Fish and Game in the study, will track the moose, documenting how long the individual moose live. When a moose dies, the collars transmit a special signal, allowing researchers to get there as soon as possible to determine the cause of death.
“When this study is done, we will have seven years of information on calf moose mortality and how that is affected by differing tick loads and moose densities, as well as multiple years of information on adult mortality,” explained Fish and Game moose biologist Kristine Rines. “We hope that this data, coupled with that coming out of Maine, will help us determine the weather patterns and moose densities that lead to increased tick mortality.”
Approximately 45 moose cows and calves were collared during the first year of the study (2014), and researchers recorded 64% mortality for moose calves and 5% mortality for adult cow moose. In 2015, 44 additional cows and calves were collared. That year, 74% of calves and 5% of adults died due to winter tick. This year, NH Fish and Game hopes to collar another 45 animals, maintaining 35 adult cows and the rest calves.
“It’s clear that we need to learn more about the causes of moose mortality and how our changing weather patterns and different moose densities may be affecting both the causes and rates of mortality in our moose herd,” said Rines. “What we learn will help our moose management team anticipate and respond to changing moose mortality and productivity.”
The study is funded by federal Wildlife Restoration Program dollars, with the support of matching funds from the University of New Hampshire. The research may help answer a question on the mind of many Granite State residents and visitors: What’s in store for New Hampshire moose?
“While regional moose populations are indeed facing some serious threats, moose are not on the verge of disappearing from the New Hampshire landscape, but they are declining,” said Rines. “The fact of the matter is that we don’t know what the future holds, but we’re hopeful that a combination of research and management efforts will allow us to do all we can to understand what the future may have in store for moose.”
Read an article about the moose research by Kristine Rines from the November/December 2014 NH Wildlife Journal): www.wildnh.com/pubs/documents/samples/whats-bugging-our-moose.pdf
Updates on the study will be published at www.wildnh.com/wildlife/moose-study.html.