A question to ponder from Science Cafe: Do self-driving cars run over squirrels? 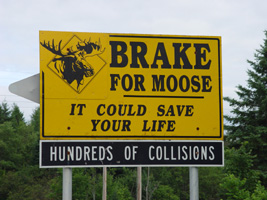 Does a Google Car know what to do?

Another full house at last night’s Science Cafe Concord, with at least 60 people crowding in The Draft Sports Bar to discuss self-driving cars. As moderator, walking around handing a microphone to people in the audience asking questions, I can’t take notes, but here are a couple of questions and issues I took away:

+ Do self-driving cars run over squirrels? This idea grossed out some audience members, but sudden swerves or braking to avoid small animals dashing into the road is dangerous, so from a logical-engineering point of view, just ignoring them is probably the best thing to do.

+ What do self-driving cars do when they can’t avoid a moose? Scores of people have died on New Hampshire roads after hitting moose, as the road signs warn (see above). Moose are so tall that they roll over the hood when you hit them and crash through the windshield – unlike deer, which are more likely to be pushed aside or under the car. As a result, if you can’t avoid hitting a moose it is safer to swerve rather than strike it head-on. Is that part of Google’s algorithm, I wonder?

+ Will we need highway police? Somebody asked how police officers would deal with arresting a self-driving car, which led Dartmouth’s Sean Smith to ask a question I hadn’t thought of: Will we even need cops on the highway if we switch to self-driving cars? They can be programmed to not speed and they don’t drive drunk, so maybe a side effect would be to reduce the amount of police needed.

The video from the session will be placed on the Concord TV page in a few days.