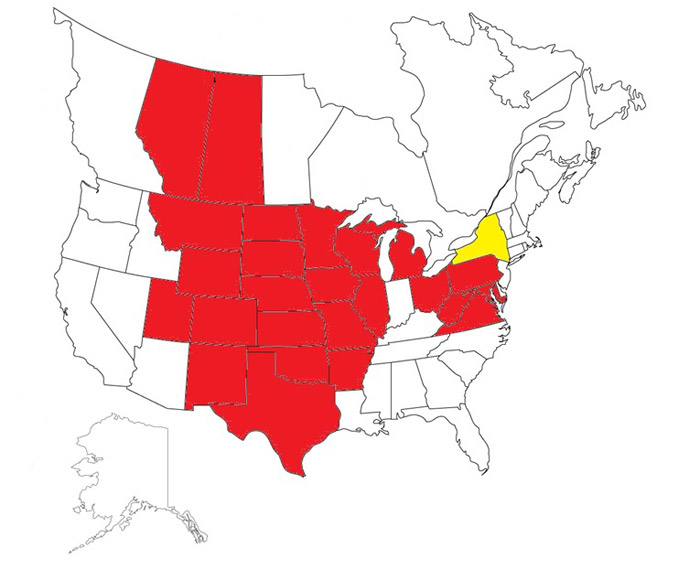 CWD is in red areas; New York state appears to have eradicated it.

New Hampshire’s deer population is still free of a form of mad cow disease that once seemed likely to arrive here, having moved as close as New York state, but to keep us safe the state is asking hunters to give up something useful: Urine-based lures.

“While it is good news that New Hampshire remains free (of chronic wasting disease), we are asking hunters to help our herd by not using natural urine-based deer lures when hunting, because these products can potentially spread CWD,” said Dan Bergeron, deer biologist for New Hampshire Fish and Game, in a press release about the issue.

The state agency  recommends that hunters “choose from among the many effective synthetic lures available on the market.”

Chronic wasting disease, first identified in the 1970s in Colorado, is a neurological disorder that is fatal to white-tailed deer, moose, and other members of the deer family. There is no scientific evidence to suggest CWD can be transmitted to human, but officials caution hunters when coming into contact with an animal that may have CWD – particularly to avoid the spine and brains.

CWD is transmitted by an abnormal protein, also known as a prion, found in the nervous system and lymphatic tissue of infected animals. These abnormal proteins are very stable and can persist in the environment for many years, and there is concern that they may end up in lures made from deer urine.

“Studies have shown these abnormal proteins are found in nervous system tissue, lymph nodes, saliva, urine, and feces, among other places. Urine for natural lures is collected from captive deer facilities outside of New Hampshire, many of which are located in states where CWD is present,” Fish and Game wrote in a press release.

While most hunters use small amounts of these lures, continued application can have cumulative effects over time, he said.

“Deer urine is not a regulated industry or product, and these lures do not undergo any quality control or treatment that might inactivate or kill disease-causing agents,” said Bergeron. “Also, commercial lures are not tested for the presence of CWD prions.”

Several states and Canadian provinces have banned the use and possession of urine-based lures.

CWD has been found as far east as New York, Pennsylvania, Virginia and West Virginia, detected in wild or captive deer in a total of 26 states and provinces. See a list and map of infected areas at www.wildnh.com/wildlife/cwd/index.html.

Bergeron said results from a veterinary diagnostic laboratory indicated that 364 tissue samples taken white-tailed deer during the 2015 New Hampshire fall hunting season all tested negative for CWD.  Since the monitoring program began in 2002, some 5,549 deer have been tested in New Hampshire.