Electric car fast charger for the North Country – no, it’s not from Tesla 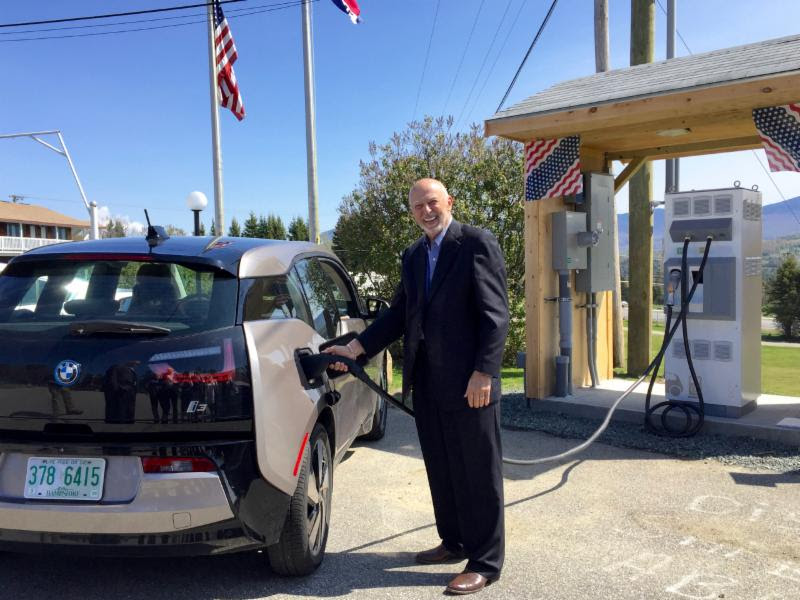 The new fast-charging system unveiled Friday at a popular campground in Lancaster, in the part of the state known as North of the Notches, is the first such public facility in the North Country and the first non-Tesla Level 3 charger available in the state for the public. It’s being paid for by what’s called the Forward NH Fund, which is used by Eversource and Hydro-Quebec as part of their sales pitch for the proposed and very controversial Northern Pass  transmission lines which would carry hydropower from Quebec into New England.

I’ve long been surprised that electric companies aren’t building car chargers right and left, to goose a market which will use their product, although I realize that the complex regulatory structure around electricity makes that complicated. Using money from Northern Pass, which is a separate, non-regulated entity, is easier.

I have a short announcement about it in today’s Monitor, but many of the details weren’t available when I filed that. A few extra tidbits:

+ It will have one CHAdeMO and one CCS charger, so it can handle all models of non-Tesla cars.

+ It is a behind-the-meter system for Roger’s Campground. The owner, Crosy Peck, was quoted in the press release as saying: “EVs are here and more are on the way. … This fast charger will attract a segment of our tourist population that I expect will continue to grow each year.”

+ It cost about $100,000 to install, according to Eversource spokesman Martin Murray, who wrote in an email: “There were a number of upgrades necessary, between the meter and the station, including new pole, x-arms, and transformer.” No upgrades were needed for the local substation.

+ Murray wrote that the campground owner has customers with electric vehicles that plug into the 110-volt outlets located at each campsite and charge overnight.

Fast DC chargers are usually said to be able to “fill up” an electric car to at least the 80 percent level in 20 minutes. The same thing from a 110 volt home system would take eight hours or more.

By the way, driving past the Hooksett tolls today, I saw a Tesla charging up – the first time I’ve ever spotted one of the dozen Supercharger stations being used.