Blast from the past: The story of N.H.’s famous Unix license plate 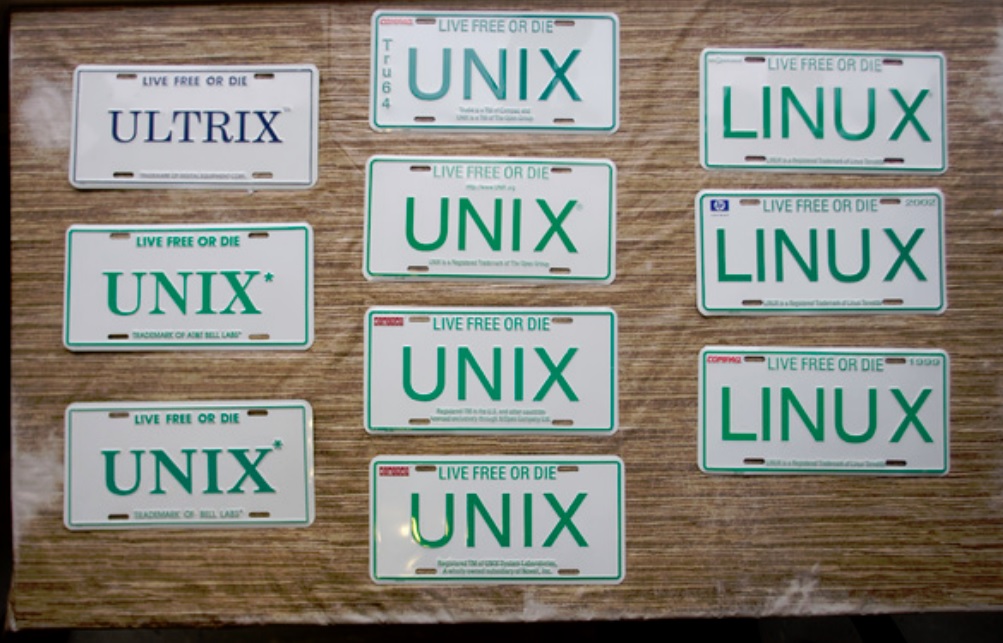 These license plates would still be allowed. (Part of Jon "maddog" Hall's collection)

One of New Hampshire’s most famous geeks, Jon “maddog” Hall of Linux fame, is recovering from a serious cardiac illness. The news is public so I don’t mind mentioning it now that he’s on the mend. I thought I might wish him well by dusting off a story I wrote on May 17, 2009 for the Nashua Telegraph, in which he gave the inside scoop on the license plate that most of you would kill for. (I’ve slightly updated it and trimmed a few now-irrelevant bits)

Famous, that is, for a very focused definition of the term.

“Sometimes I’ll come out and find a business card left on my windshield, saying ‘I’m a Unix guy,’ ” said Hall, who has turned down many requests over the years to transfer his plate to other people.

During a lunchtime interview at the Riverhouse Restaurant in Milford, where Hall ate so frequently that the staff will lock up and leave him alone if he wants to linger after closing time, Hall remembered the time that a “marketing guy” wanted to tinker with the formula.

Unix is a software operating system – named not after eunuchs, a verbal similarity that has produced many jokes over the decades, but as a pun on an earlier operating system called Multics. It was developed in 1969 by several employees of Bell Labs, including Ken Thompson and Dennis Ritchie, who have gone on to achieve semi-godlike status in computerdom.

This is the vital point: Bell Labs was the pure-research division of AT&T, which as a regulated utility gave its computer researchers free rein out of fears about regulators looking askance at a telecommunications firm dabbling in other areas. So the Unix cost was given away to academic institutions, to study and work with, at a time when computers were shedding their mainframe infancy and spreading throughout society.

As a result, Unix was used by programmers far and wide, tweaked and improved, and many of the resulting versions (aka “flavors”) were shared for further improvement.

Most famously to the outside world, Linux, the share-and-share-alike operating system, was created as a rewrite of Unix, but it also became the basis of many commercial proprietary systems that individual companies could improve as they saw fit, selling licenses for their use.

As a result, Unix became synonymous with the idea that digital information wants to be free – not “free” as in gratis or without cost, but “free” as in “do what you want.” (In geek-speak, that’s “free as in speech, not as in beer.”)

In the mid-1970s, pioneering computer company Digital Equipment Corp. expanded north from its Massachusetts base and opened facilities in Greater Nashua. By the early 1980s, it was developing its own Unix-based systems.

Among its employees in New Hampshire was Armando P. Stettner, who now works for Verizon’s FiOS fiber-optic systems. Stettner (known to many at the time by his login name “aps”) was such a Unix fan that he put the operating system on his vanity license plate, getting extra pleasure from the New Hampshire motto.

As told by Hall, and on the “official” history at www.unix.org (where one of these license plates is part of the decoration), people kept asking Stettner when they could buy the legal license to use DEC’s version of UNIX directly from DEC instead of getting it from AT&T, corporate parent of Bell Labs.

Negotiations between DEC and AT&T were proceeding so slowly that the exasperated Stettner, tired of saying “not yet,” had the brilliant idea of making fake versions of his license plate.

Queried onstage at a software conference about when Unix licenses would be available, he cried “Right now!” – which, according to Hall, practically produced a heart attack in DEC lawyers in the audience, who knew that corporate negotiations were still going on.

Stettner whipped out the fake plates, there was pandemonium among the crowd of programmers (who love a good pun as much as they love a free trinket), and a cult was born.

Versions have been generated ever since, and fake New Hampshire license plates naming Unix or its various flavors, including Linux, are a staple of the computing industry. Early fake plates embossed with the logo of dead companies are particularly treasured, like owning a T-shirt from an early Rolling Stones tour.

There are software engineers in India, Brazil or Russia who couldn’t find New Hampshire on a map for a million dollars, but they know the look of our license plate.

“Every state has a Unix license plate. It’s the “Live free or die” that matters,” Hall said. “This is what Unix promised you: to be free, not to be tied to one particular company’s operating system.”

To wind up, here’s some Jon Hall background

Hall, often known as “maddog” after an old online moniker, encountered Unix working for Bell Labs and brought his enthusiasm to DEC. In 1989, Hall went to the local DMV to get vanity plates for his feisty new Jeep (“That’s a freedom sort of vehicle, I think,” he said) after Stettner, who left DEC in 1990, had let his license plate lapse.

“I filled in the form and (the clerk) told me, ‘I can give you your first choice.’ I went, ‘Yessss!’ ” said Hall, recalling the moment with glee.

The day he installed the UNIX plates, he went early to work at DEC’s office on Spit Brook Road in Nashua, so he could get the parking space right next to the door used by all the Unix engineers. He watched them come in one after another and do a double take at seeing the real-world version of the famous fake plate.

It was his then and it is his now. One suspects you will have to pry it from his cold, dead fingers.

Hall has since gone on to bigger things. As president of the nonprofit Linux International, he has become a free-software guru, complete with his own wikipedia article. He spends much of his time trotting the globe, peddling a vision of an open-software world in which “free as in speech” would be the prevailing ethos. Never, ever tell him that you admire Microsoft products.