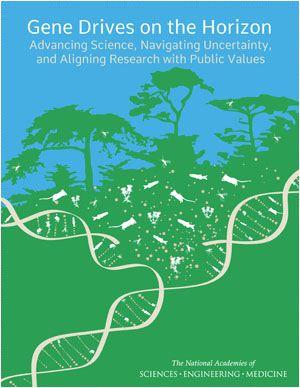 I mentioned a few posts ago the possibility of tweaking ticks so they don’t pass on Lyme disease. This is part of a process called “gene drive,” in which “scientists could alter the DNA of a few individual organisms and use gene drives to spread a modification throughout an entire population by tweaking the rules of genetic inheritance.”

This can’t be done yet but it’s on its way, and the possibility is really exciting, and really scary. Vox has an excellent explainer right here, and you should read it. A snippet:

The National Academies of Sciences’ report on gene drives is long, thorough, and utterly fascinating. But the very basic point is that laboratory research in developing gene drive systems is outpacing our knowledge of the ecological impacts of deploying this technology into the wild. There are dozens of experiments in using CRISPR-Cas9 to create gene drives. And not enough research into what this would look like in nature.

Before we even think of using this technology in the real world, the report notes, we need to better understand how a gene drive would propagate through a wild population of the target species, how it would affect its evolutionary fitness, and whether modified genes might “flow” to a different species.