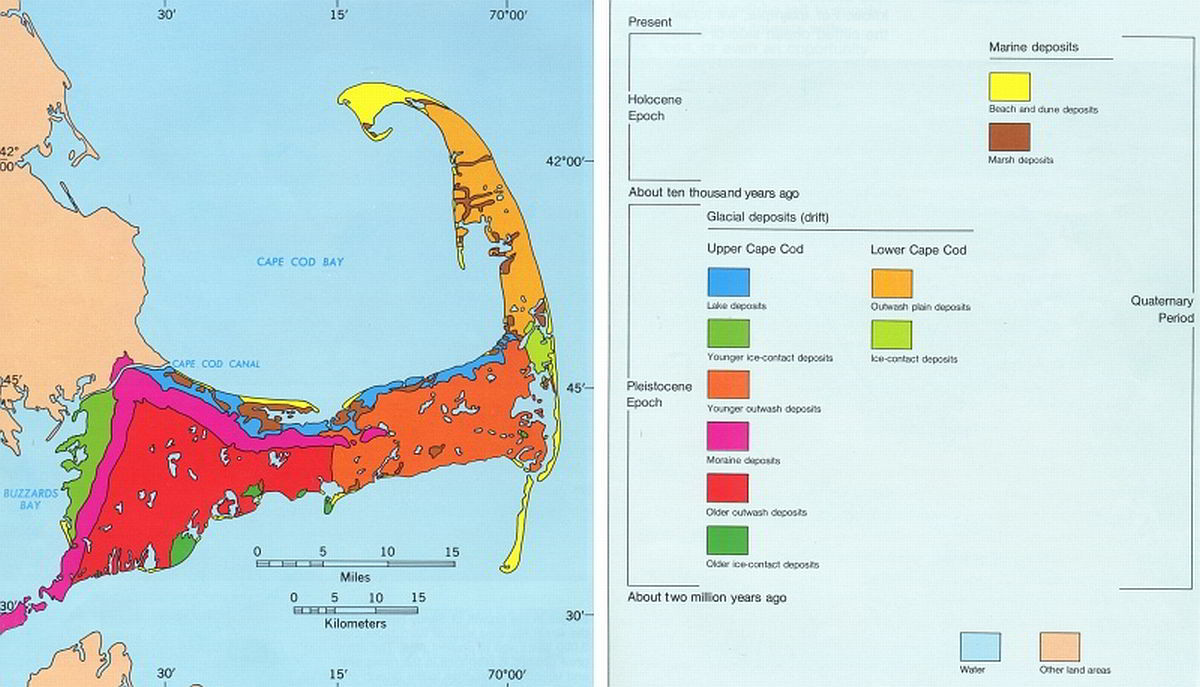 Geological map of Cape Cod, from wikipedia (where else?)

Cape Cod is vulnerable to rising water tables and, in some areas, groundwater inundation as a result of rising sea levels, according to a new U.S. Geological Survey study.

Groundwater inundation occurs when the water table reaches or exceeds land surface. The challenges associated with the issue are likely to become more prevalent as seas rise. In some communities, groundwater inundation may result in saltwater intrusion of aquifers, problems with underground utilities and pipes, flooded basements and septic system failures, among other challenges. Depending on the severity, it may make areas unsuitable for residential and commercial development.

The USGS study, done in cooperation with the Association to Preserve Cape Cod, the Cape Cod Commission, the Massachusetts Environmental Trust, and the Nature Conservancy, found that the water table on Cape Cod could rise by about two feet, on average, in response to a six-foot sea-level rise, the level some models predict will occur by 2100. The potential rise in the water table is less than the potential rise in sea level because the Cape’s streams and wetlands are expected to dampen the water-table response, which likely would mitigate some of the effects of sea level rise in inland areas.

“Near the coast, however, we believe the rise in the water table would probably be larger, suggesting a substantial likelihood for groundwater inundation in some low-lying coastal areas,” says Donald Walter, a USGS hydrologist and lead author of the study. “Although sea level rise is a global issue, the impacts can be local. Cape Cod is a coastal area with a large population and some areas that will be susceptible to sea-level rise.”

The USGS looked at projected changes to the water table and groundwater inundation in response to sea level rises of two, four and six feet. The information from the study is expected to help local officials as they address how to mitigate expected sea level rise on the island.

“This study points the way to several next steps. In areas where the water table is predicted to rise, communities should plan for impacts on water quality, management of stormwater and wastewater, and infrastructure,” said Jo Ann Muramoto, the Association to Preserve Cape Cod’s director of science programs. “Long-term monitoring of groundwater, streams and sea level rise will be needed to confirm the model over time and alert us to rising groundwater. The Cape’s natural drainage system of streams and connected ponds is important for offsetting the effects of rising groundwater. Protecting and restoring our natural surface drainage system could be an important coastal resilience measure.”

The report, “Potential Effects of Sea-Level Rise on the Depth to Saturated Sediments of the Sagamore and Monomoy Flow Lenses on Cape Cod, Massachusetts,” by Donald A. Walter, Timothy D. McCobb, John P. Masterson, and Michael N. Fienen, is published as U.S. Geological Survey Scientific Investigations Report 2016-5058 and is available on the web at https://pubs.er.usgs.gov/publication/sir20165058.