At UNH, cows send a text when they go into labor (and it’s not over-sharing) 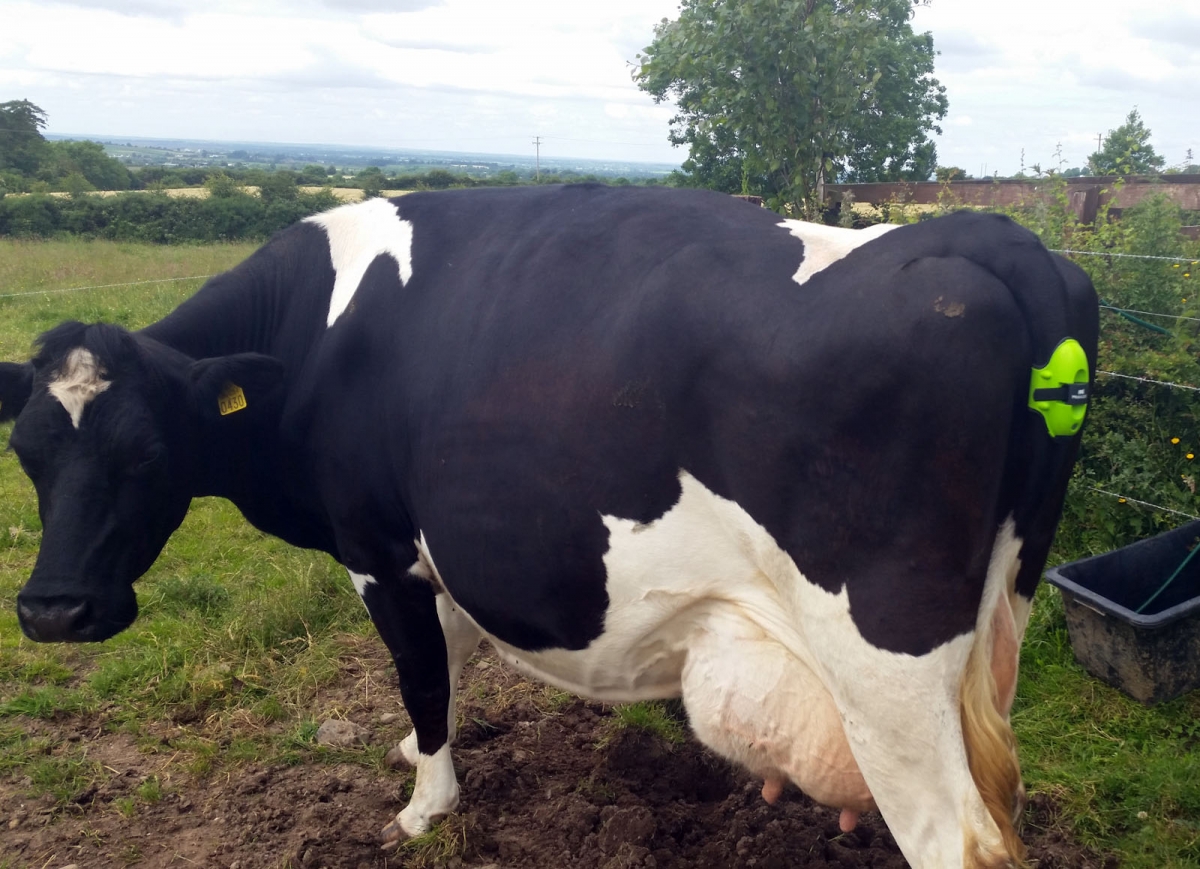 UNH Photo: That's a Moocall sensor on the cow's tail, which sends a text when labor is starting.

It’s the middle of the night, and University of New Hampshire doctoral student Kayla Aragona has just received a text alert at home on her cell phone from a cow in labor at the Fairchild Dairy Teaching and Research Center. A sensor – Moocall – attached to the cow’s tail has detected that the cow is highly active, likely due to an increase in contractions.

Aragona has been using Moocall sensors for about four months at the UNH Fairchild Dairy, a facility of the New Hampshire Agricultural Experiment Station, to help better monitor pregnant cows during the night. She receives both text alerts and emails from cows about to calve.

Moocall is a non-invasive sensor attached to the tail of the cow that measures tail movement patterns triggered by labor contractions. It gathers more than 600 pieces of data a second. When the cow reaches a certain level of intensity and movement over a specific period of time, the Moocall sends a text alert to a cell phone. On average, the Moocall alerts dairy managers about an hour prior to a cow calving. Moocall was developed in Ireland and released commercially in 2015 after a dairy farmer lost a heifer and a calf during an unattended birth. According to Moocall, UNH is one of only two university research dairy farms in the United States using the technology.

“When properly fastened, the Moocall will give me a two-hour notice for a calving by sending me text alerts to my cell phone when a cow is active for one hour, and then again when a cow has been active for two hours. This makes it easier for me to be here when a calf is born to ensure that the birth goes smoothly,” Aragona said.

Unattended calving can have significant consequences for dairy farms. According to Virginia Cooperative Extension, almost 50 percent of all young calf deaths, birth to 24 hours old, are a result of calving difficulty.

Prior to using Moocall, Aragona said she relied on the farm staff to call her when they arrived at the farm around 4 a.m. regarding cows that were soon to calve. While UNH has students on site 24 hours a day, no one typically is in the barn from about 10 p.m., following night check, to 4 a.m.When Aragona knew she had a cow close to calving, she would check on her periodically throughout the night – every night – until the cow calved. But this isn’t very conducive to sleeping, especially when considering there are about 70 calves born every year at the Fairchild Dairy.

“With the Moocall, I no longer need to drive in to check on my cows, or depend on the farm staff to actually call me, so I can sleep better not worrying about missing a calving. Although I get a few false alarms here and there, I have yet to miss a calving,” she said.

The Moocall isn’t foolproof, however. “The funniest experience with the Moocall so far has been when I used it on a cow that did not like it. She would rub her tail up against everything and literally bang the sensor against the wall to try to get it to fall off. No wonder I got a few false alarms!” Aragona said.

The award-winning Fairchild Dairy Center develops new knowledge and management expertise geared directly toward many state and regional stakeholders. It houses about 80 milking-age Holstein and Jersey cows and approximately 70 growing, replacement animals. Included in that number is the 20-cow, student-managed herd, with the remaining animals devoted primarily to research in the area of dairy nutrition and reproductive biology.