If mountain lions were here, we wouldn’t hit deer with our cars so much 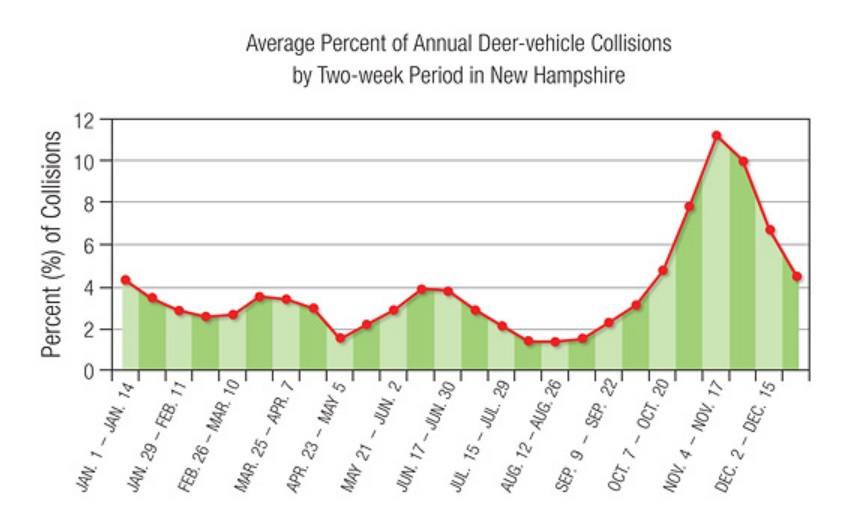 Deer-car collisions during the year in NH

Mountain lions have not returned to New Hampshire on their slow movement east (despite what some folks think), but maybe we should help them come back. Why? To get rid of some of these $%^#!! deer.

Our coupled deer population models and socioeconomic valuations revealed that cougars could reduce deer densities and DVCs (deer-vs.-car collisions) by 22% in the Eastern US, preventing 21,400human injuries, 155 fatalities, and $2.13 billion in avoided costs within 30 years of establishment. Recently established cougars in South Dakota prevent $1.1 million in collision costs annually. Large carnivore restoration could provide valuable ecosystem services through such socio-ecological cascades, and these benefits could offset the societal costs of coexistence.

That’s the conclusion of this study  by a number of academics from Idaho, Washington and Alaska. Its models estimate that cougars would kill enough deer in New Hampshire to prevent 317 injuries and 2 deaths resulting from deer-car collisions, by reducing total deer density from 3.5 per square kilometer to 2.9.
The model said cougars could help us avoid 10,500 collisions over 30 years, which struck me as ridiculously high until I went to the NH Fish and Game page, which says that “In a typical year, an estimated 1,200 deer/vehicle collisions occur in New Hampshire.” Wow! They’re not spread out, however: !Almost a third of all deer-vehicle collisions in New Hampshire occur from mid-October through the end of November. Deer are very active at that time of year because the mating season, or rut, is underway and bucks and does have their minds on other things than traffic!”
In general I’m a fan of returning alpha predators to the environment because it has a great ripple-down effect (wolves in Yellowstone are the obvious example).  On the other hand, mountain lions are that rare carnivore which can be dangerous to people, and there are already a lot of people who get themselves hurt in the White Mountains.