My visit to the disappointingly-not-too-stinky ‘corpse flower’ 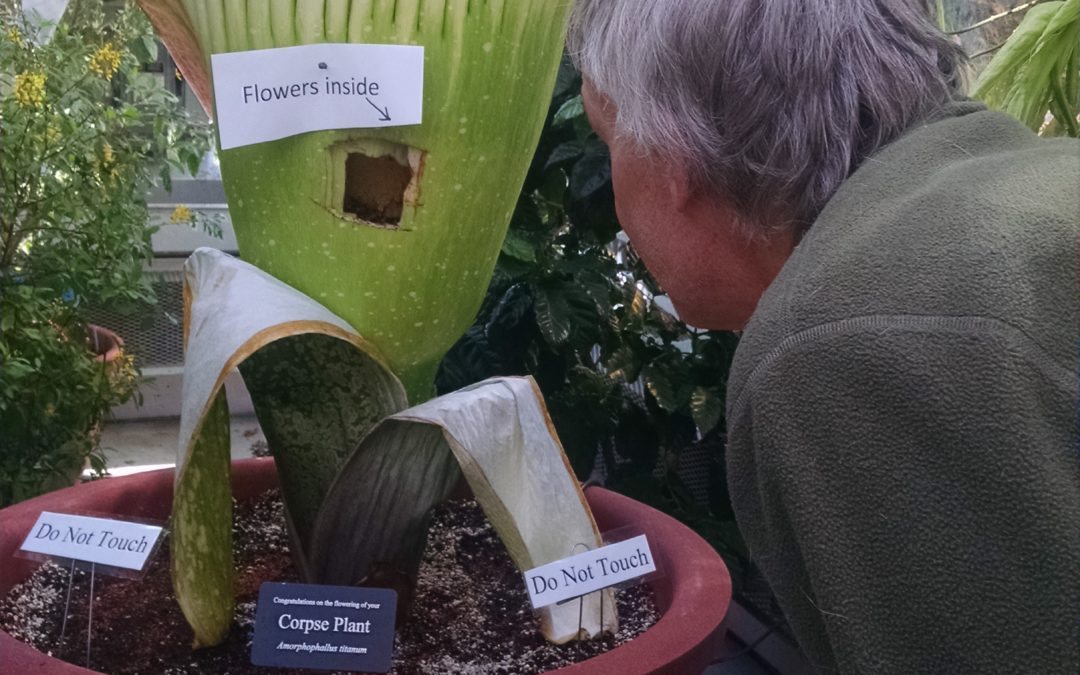 The greenhouse staff cut a hole in one leaf so you could see the flowers.

On Sunday my wife and I visited Morphy, the “corpse flower” blooming at Dartmouth College, joining the teeming hordes who couldn’t pass up the chance for a vegetative olfactory assault from the world’s largest flower.

We arrived at 10 a.m., just as the greenhouse opened, but at least 100 people were ahead of us, forming a line that stretched out the building, across the entry plaza and halfway down a hill. Greenhouse Manager Kim DeLong estimated Sunday afternoon that more than 3,000 people had visited Morphy since it started blooming Friday.

The crowd Sunday morning included Karen Nelson of North Conway, who was intrigued after hearing about the world’s largest and smelliest flower on a WMUR-TV report  (I guess local TV news is good for something). She brought her daughter, Sarah, and Sarah’s friend Samantha Provencher, both sophomores at Kennett High School.

Cleverly, mom waited until they were 15 minutes away from Hanover to t tell them that their secret adventure was visiting a gigantic plant infamous for stinking to high heaven as a lure to pollinators.

“I didn’t realize we were going to see something that smelled like it was dying,” said Sarah, who seemed underwhelmed as we waited in the sunshine. I suggested she would be able to dazzle her science teachers with a report on Monday morning, which may or may not have piqued her interest. It’s hard to tell with teenagers.

Morphy is an Amorphophallus (hence “Morphy”) titanum from the rain forests of Sumatra in Indonesia.  This plant blooms once every 5 to 10 years, depending on age. Morphy, we were told by staff of the Life Sciences Building on hand to contain the throngs, bloomed for the first time at age 8, which was 5 years ago, but word didn’t get out because Dartmouth was in the process of moving the plant into the then-new greenhouse.

Morphy was about 7 1/2 feet tall when we visited, but she (or he – each plant has both sexes of flowers) will probably have collapsed by the time you read this. The blooms only last a couple of days, which seems like a very poor evolutionary strategy but has worked for millennia.

These days the corpse plant is endangered because Indonesian forests are being cleared for palm-oil plantations. But the species is popular with arboretums around the world because it’s such a draw for the public. In fact, the Franklin Zoo near Boston also has a corpse plant that is also about to bloom.

Enough botany; you want to know how it smelled. Alas, not bad at all.

By the time we arrived Morphy had largely stopped emitting the noxious gasses that create its reputation, and the main scent was lingering in the greenhouse. I hardly noticed anything, and it didn’t seem to bother anybody else.

DeLong, who was watching the crowd and occasionally prodding us to move along like a bouncer in a botanical car, said the smell had been overwhelming at first, and also had varied over time. “Sometimes it was like dirty diapers, sometimes like dead fish,” she said.

Even with diminished odor, however, Morphy is an astonishing plant. The enormous central pillar, whose shape explains why “phallus” is tucked into the middle of its name, towers overhead and is surrounded by huge sculpted leaves that are big enough to hide a good-sized dog. The greenhouse had cut a small window in one leaf so you could see the tiny red flowers inside; luring flies to walk on these flowers and carry off pollen is the whole point of the stench.

The greenhouse owns a second corpse flower, on display beside Morphy, but even though it is now 8 years old, it is much smaller than Morphy was at that age and doesn’t seem likely to bloom for a long time, yet.

When it does, however, I’m there – and on the first day possible. No way I’m missing a good gag reflex for a second time.