Patents are like murder trials: The reality is much duller than you’d think

Every week the Monitor prints a list of patents issued to New Hampshire individuals or companies; here’s the most recent list. I had the idea to feature one patent each week in this newsletter, but unfortunately most parents are really dull – or, at least, it takes more time than I have to figure out what’s interesting about them. Maybe the Hewlett-Packard patent on “managing settings of computing devices” is thrilling, or BAE System’s “N-path cascode transistor output switch for a digital to analog converter” is a rip-snorter, but I’ll never figure that out.

Consider an easier example from Nemo Equipment, the intriguing outdoor-equipment firm in Dover (I covered it when it started in Nashua). They just got design patent D766,643 (this is a type of patent that covers appearance rather than function) for a “portable pressurized water dispensing device”. Sounds cool! I had visions of a steampunkish post-modern Thermos-like device, so I went to the Patent Office’s very good search engine and looked it up. Here’s their illustration: 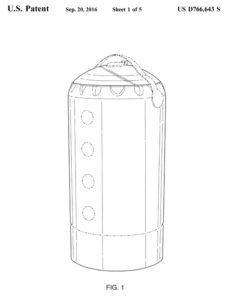 Pretty exciting, eh? I assume it will be nicer-looking in the catalog.

Ah well. I’ll check the patent list each week and if fun stuff shows up in future I’ll discuss it here.