UNH researcher finds a rogue black hole destroying everything in its path – no, that’s not an election joke 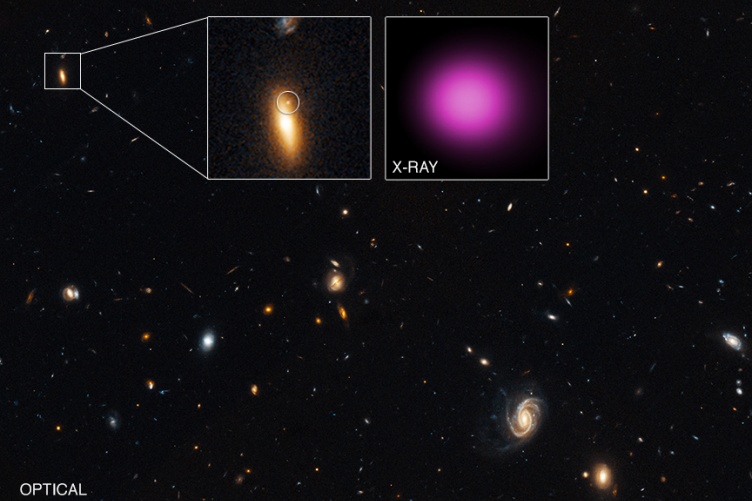 By Beth Potier, UNH News Service: It sounds like the stuff of science fiction: researchers discover a massive black hole wandering at the edge of a galaxy about 4.5 billion light years away. But it’s science fact, and the discovery of this unusual phenomenon is key to understanding how galaxies form. UNH Space Science Center research scientist Dacheng Lin is the lead author of an article in The Astrophysical Journal that describes the finding.

“From the theory of galaxy formation, we expect a lot of wandering massive black holes,” says Lin, of the Institute for the Study of Earth, Oceans and Space. “But there are very, very few that we know of, because they are normally very quiet and very hard to detect.”

Lin used data from NASA’s Chandra X-ray Observatory and the European Space Agency’s XXM-Newton X-ray observatory to find evidence for this wandering massive black hole. Between 2000 and 2002, the two X-ray telescopes, orbiting thousands of miles in space, observed an extremely luminous flare of X-rays outside the center of its parent galaxy, known as GJ1417+52. Future observations of this source show its brightness has declined by at least a factor of 14 between 2000 and 2015, indicating the earlier observation showed something unique.

“It is interesting in that it looked like the source was discovered when it was ‘eating’ a nearby star,” says Lin. As a star comes too close to a black hole, the gravity of the black hole tears it apart. Gaseous material from the star falling toward the black hole caused this X-ray flare, which is about ten times more luminous than the brightest X-ray source ever seen for a wandering black hole.

Lin describes the computational effort to discern what he calls the “spectral DNA” of this source from about half a million X-ray sources as finding a needle in a haystack.