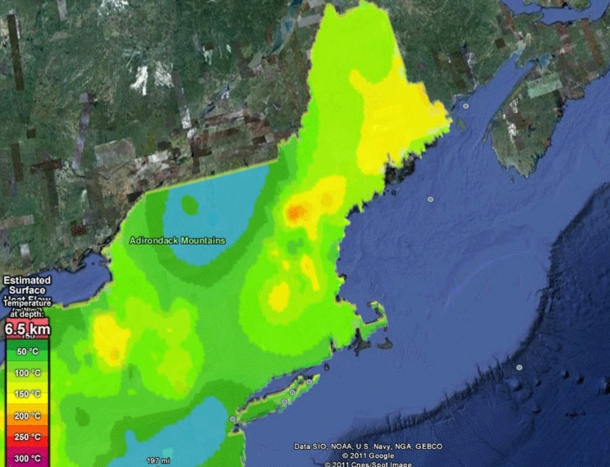 A portion of a 2011 analysis of geothermal potential in the U.S., with colors showing estimated temperature 6.5 kilometers below the surface. The orange spot in N.H. is the Conway area.

NOTE; This item was in last week’s Granite Geek newsletter. If you have a free subscription, you’ve seen it already. If not, get one! It lands in mailboxes today (Thursday).

One of the candidates for some state office recently told the Concord Monitor’s edit board that New Hampshire should pursue geothermal energy – using high underground temperatures to boil water that spins turbines and generates electricity, like they do in Iceland or near Yellowstone National Park. (This differs from so-called geothermal systems, which are heat-exchange systems using stable underground temperatures to increase the efficiency of traditional heating and cooling technology.)

This reference puzzled people until I remember that I have written about this very topic in past years. So I poked around in digital archives and dusted off a column from five years ago, which referenced another column I had written four years previously. I present it now in edited form just in case the issue arises again:

From GraniteGeek column in the Nashua Telegraph, October 2011: The East Coast, which is geologically quiet, has always been a geothermal dud. So it was a big surprise back in 2007 when an MIT report identified the Conway area as the one spot east of the Mississippi where true geothermal might be financially feasible – not due to underground magma, but to natural radiation from New Hampshire’s signature stone.

“That’s because of all the granite you have. The uranium, thorium and potassium act like a natural nuclear reactor and keep the rock warm,” Ron DiPippo, a former dean of engineering who was on the panel that wrote the report, said in an interview back then.

He also reminisced about how, during the 1970s oil shocks, “hot, dry rock” experiment was planned for Conway to determine the suitability of geothermal power. But oil prices went down and the panic subsided, so the study was canceled and we were left ignorant – as is too often the case with alternative energy research.

In 2011, a new analysis of the nation’s geothermal prospects once again showed Conway as the Northeast’s one bright spot (quite literally, when looking at the map on Google Earth software).

The analysis was done by the Geothermal Laboratory at Southern Methodist University in Dallas, and was funded by Google. The search giant uses bazillions of kilowatts of energy every second for its many computers around the world and has identified geothermal energy as a possible future, and largely nonpolluting source of some of this electricity – hence its interest.

Caution is in order, though. Back in 2007, the MIT folks said if Conway tapped its geothermal energy, it would be the most expensive such site in the country because of the extreme depth of drilling needed to tap the heat from the granite. But the SMU report said new (that is, new as of 2011) technologies means lots more geothermal is feasible than we once thought. They claim the continental U.S. has 3 million megawatts of potential geothermal energy, about 300 times the entire global output of such power right now.

As a theoretical maximum, it claims New Hampshire could generate as much as three Seabrook Stations’ worth of power from geothermal.

That sounds nice, although I suspect that packaging ourselves as the Radioactive Granite State wouldn’t exactly thrill the tourism board.