What exactly is that new Manchester bio-institute trying to do? 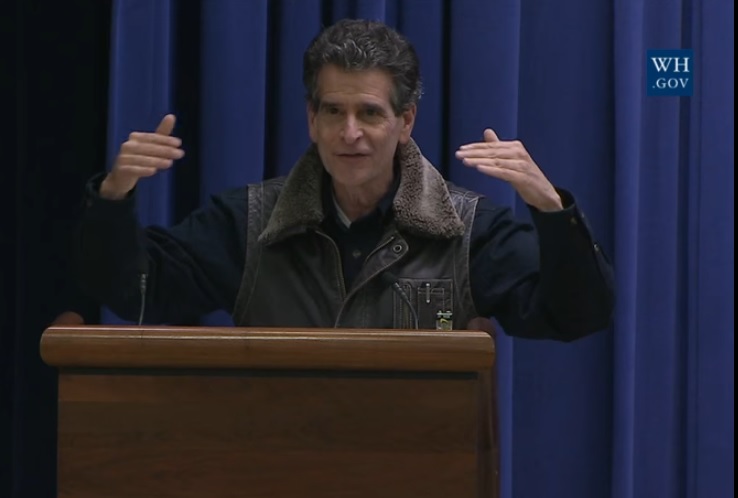 You think those California software CEOs wear casual clothes to PR events at the White House? Dean Kamen has them beat.

Note: Subscribers to the GraniteGeek weekly newsletter saw this story yesterday. You can subscribe for free here.

You probably heard the news Wednesday about a federal/private initiative to develop an Advanced Regenerative Manufacturing Institute in Manchester, with  $80 million in federal financing over five years. It involves lots of groups and universities from around the country, coordinated by UNH, Dartmouth-Hitchcock and DEKA Research, the R&D firm of Dean Kamen, New Hampshire’s life-science answer to Elon Musk.

The announcements included lots of “this is awesome for New Hampshire” comments  – the best story, as to be expected from him, is a follow-up from David Solomon in the Union-Leader today –  but they were a little lean on what exactly the institute wants to do and how to do it. The best information I’ve found so far is deep in the official White House announcement about several such manufacturing initiatives:

Advanced Regenerative Manufacturing Institute is poised to develop next-generation manufacturing techniques for repairing and replacing cells and tissues, which may one day lead to the ability to manufacture new skin for soldiers scarred from combat or develop organ-preserving technologies to benefit Americans stuck on organ transplant waiting lists. Headquartered in Manchester, NH, ARMI will focus on solving the cross-cutting manufacturing challenges that stand in the way of producing new synthetic tissues and organs—such as improving the availability, reproducibility, accessibility, and standardization of manufacturing materials, technologies, and processes to create tissue and organ products. ARMI will convene leaders from a multitude of disciplines, from cell biology and bioengineering to materials science and computer modeling. The partners will work to develop high-throughput culture and 3D biofabication techniques to non-invasive, real-time testing and sensing to measure the viability of engineered tissue constructs.

It sounds like at least part of its job will be to act as a standards body for the process of 3-D printing tissues and organs, which is a real thing and looks to become ever real-er (here’s a good update on its status from a newsletter called 3dprint.com). Setting standards is incredibly boring and contentious, but it’s vital to a new technology. Imagine, for example, if nobody had ever decided which direction screw threads should run …

You can watch the entire 2 1/2-hour (egad) White House press conference about the announcement here. Kamen comes in at about 1 hour 10 minutes with some interesting comments about developing “the printing press” for organ/tissue creation, to go with his interesting wardrobe. (I must dispute one thing he said: I was always told that Newton’s “Principia” is pronounced with a hard “c”.)

Above and beyond his work with DEKA and with the FIRST Robotics program, Kamen deserves credit for being one of the people who have helped rejuvenate the Manchester Millyard. It is one of the best rebirth-of-dead-textile-mill-space stories in New England.