Automated farming under lights (lots of lights) – is that New Hampshire’s future? 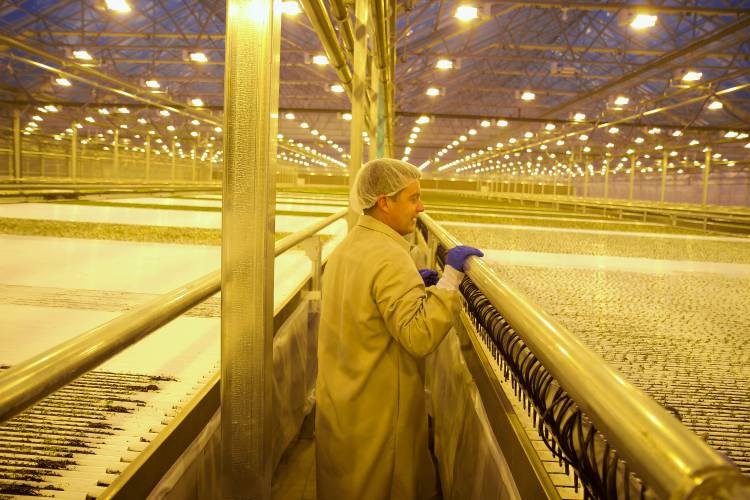 “We wear lab coats in the greenhouse because this is where you could have the most contact with the plant material,” explained Henry Huntington, president and co-founder of the state’s most interesting new agricultural operation, the automated hydroponics greenhouse called Lef Farms in Loudon, as he helped a reporter and photographer put on protective garb – protective for the seedlings, not the people.

With coats, hairnets and gloves in place, Huntington and co-owner Bob LaDue pushed through the door from the operations center, where seven days a week machines carefully place tens of thousands of seeds into 40-foot trays modeled after rain gutters, and entered the 50,000-square-foot greenhouse that they hope will launch a bright new chapter in New Hampshire farming.

On this gray, snowy day, it is certainly bright in the literal sense, with hundreds of high-pressure sodium lights (that are very annoying to neighbors) overhead going full blast to compensate for shortage of daylight coming through the glass.

“My goal is to make them think it’s June, every day. We’re feeding the plants photons,” said LaDue, who has been involved in greenhouse research and commercial operations for 20 years.

“We use as much natural light as possible since we don’t have to pay for that, and plan on about 80 percent of light coming from the sun over the course of the whole year,” he said. “Not on a day like today, though.”

A year’s production in less than a week

The bright lights in the vast open space gave the greenhouse the look of an airplane hangar, if you can imagine one with a floor that has been raised 5 feet and is made of salad greens.

How much salad greens? More than you can probably imagine.

LaDue said this 1 acre of hydroponics growing space will eventually produce 3,000 pounds of leafy greens, bagged and ready to be shipped to stores or restaurants, every 24 hours. After a few months of operation, Lef Farms (pronounced “leaf”) is running at about half speed as it tweaks the operation.

That’s a ton and a half daily of arugula, bok choy, mustard greens and lettuce, meaning that every day they expect to produce about one-third the annual production (depending on the crop) expected from an acre grown organically outdoors.

“We are very excited about it. This is the first large-scale farm of this kind designed for wholesale markets here in New Hampshire and the region,” said Lorraine Merrill, the state’s agricultural commissioner. “There have been proposals for this kind of production before that haven’t come to pass.”

Merrill said that indoor agriculture, with the promise of extending our growing season, can be an important part of the mix for state farming alongside traditional wholesale operations like dairy farms, smaller specialty farms, and direct-to-consumer sales via pick-your-own, farmers markets and community-supported agriculture projects.

The idea of farming indoors, with the aim of growing more produce on smaller plots that are closer to cities and can be harvested even during winter, is becoming realistic as technology improves. One Nashua family, for example, bought a “farm in a box” from the firm Boston Freight Farms and are raising greens for sale in a converted shipping container, with plants grown hydroponically (all the nutrients coming from water rather than soil) in rows of shelving, entirely dependent on light from LEDs.

Lef Farms isn’t quite that high-tech: It went with greenhouses and sodium lights for various cost and scale reasons. But this greenhouse is unlike any you’ve seen.

Greenhouses have, of course, been part of New Hampshire agriculture for many decades. In fact, Huntington owns Pleasant View Gardens, which like Lef Farms has greenhouses built on a former gravel pit, where tons of flowers are grown a year. His experience there helped trigger the idea for Lef Farms.

“We have significant greenhouse productions of ornamental and flowering plants in New Hampshire, including D.S. Cole Growers and Pleasant View, two of the larger and most significant plant propagators in the country,” said Merrill.

What makes Lef Farms unusual is that it produces food crops and uses an extremely automated system that can plant, grow, harvest and bag the greens over a two-week growing cycle with little or no human labor.

Huntington and LaDue said this cuts labor costs – Lef Farms has a dozen full-time positions – and maximizes production. But they also say the precision of automation, in which the water used for hydroponics is fully recycled with its nutrients and fertilizers, reduces agricultural pollution from runoff compared to standard farms. The tightly controlled greenhouse, use of hydroponics and a fast growing cycle also greatly reduce the number of insect pests and the need for pesticides, as well as eliminating weeds and any resulting herbicides.

Whether it will be worth the reported $10 million investment remains to be seen. But they have plans to build several more greenhouses if all goes well, and they have town approval for up to 12 acres of operations.

Growing any crops starts with the soil. At Lef Farms, the soil has a brand name: Cornell Mix, developed at the university where LaDue did research for years. A mix of peat and vermiculite, it comes in 120-cubic-foot bales that double in size when decompressed and watered; specialized machinery from Finland distributes it carefully along the 40-foot-long gutters.

“A lot of the technology for this was developed in Scandinavian countries. They have so little light, the growing season is so short, and they’re trying to grow their own food; that has simulated their technology,” LaDue said.

Once loaded with this dirt, each gutter moves along a conveyer under a series of machines that drop in seeds; sometimes all of one species, sometimes a variety, although growing two species alongside each other is difficult, since they are harvested at the same time and thus must grow at the same rate, so that one species doesn’t shade out the other.

Each gutter then slides onto a huge pivoting arm that swivels and sends the chute through a hole in the wall into the greenhouse. This is done roughly 800 times every day – meaning that 800 other gutters are removed and harvested.

The gutter sits in darkness underneath the growing area for two days while the seeds germinate, before being pulled by on an enormous toothed belt up into the light. Over the next 14 to 19 days, depending on the crop, it will be pulled slowly from one end of the greenhouse to the other, roughly 300 feet, while the plants are fed by a constant stream of water containing a mix of micro- and macro-nutrients, made by blending various fertilizers.

“Bob’s kind of the mad scientist. He makes his own mixes,” Huntington said.

During this entire process, little to no human interaction will be required, although LaDue and others will be monitoring many factors – not just plants’ growth and health, but the building’s temperature, the total light as measured in moles (a unit you might remember from high school chemistry) of photons, its humidity and even its carbon dioxide level.

Even carbon dioxide must be balanced

That last factor is crucial, LaDue said. Plants breathe in carbon dioxide and during the winter, when the greenhouse lacks natural airflow through the heavily screened windows, they would use up most of the CO2, stunting growth, if it weren’t replaced.

Lef Farms produces CO2 as a byproduct of the gas-fired heaters, and even produces more than natural levels to boost growth, which enables them to cut back on lighting, one of their biggest costs.

Lighting has also been a source of irritation to neighbors, who have complained to town officials about the brightness of the glow at night from this new presence in town. Lef Farms has said it will improve its use of shades to reduce the excess.

Getting the plants cold fast

Eventually the plants make it to the far end of the greenhouse, where conveyors transfer them, plants still growing, directly into the cooler, which is larger than some warehouses. Only inside the cooler do they get “a haircut” from automated blades, with salad greens automatically sorted on conveyer belts and dropped into a machine that puts them inside plastic bags. That’s all without human help – at least in theory; LaDue said the system is still being tweaked.

Bringing plants into the cooler while they are still growing is a key to maintaining freshness, said LaDue, who compared it to traditional harvesting.

“On most operations, you get them cut, it goes into bins, people are mixing them by hand. That’s not good,” he said. “The faster you get them cold, the better.”

And that’s not counting the benefit of being closer to our tables and stores. “Alternative to West Coast-grown greens” is a phrase that shows up a lot in their promotional material. LaDue claims that this system gives Lef Farms greens sold to retailers “shelf life like they’ve never seen before,” justifying a premium price.

Plenty of people around the state and the region will be watching, both to see if that belief holds up and to see what it means about our ability to feed ourselves in New England.

“I would expect we will probably see further developments, variations on this theme – in lots of different ways,” said Merrill, the agriculture commissioner. “Farmers are creative and resourceful; they’re always finding ways to make technology work for them.”