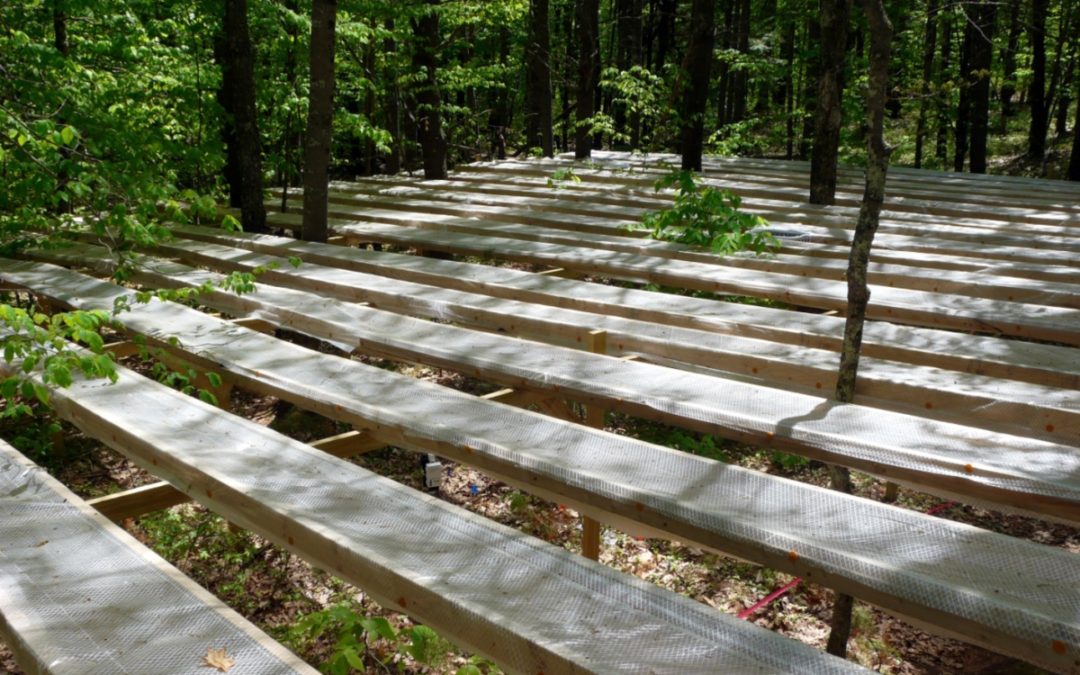 The drought experiment at Thompson Farm. This network of gutters removes approximately 55 percent of the throughfall that falls beneath the forest canopy, simulating a one-in-one-hundred year drought event. Credit: Heidi Asbjornsen/UNH

Preliminary research results from the University of New Hampshire show that certain tree species in New Hampshire fared better than others at the height of the 2016 New England drought and were able to continue taking up water even when soils were very dry.

“Climate change forecasts predict that the northeastern United States will see both an increase in total annual rainfall and a higher frequency of prolonged dry spells,” said Heidi Asbjornsen, associate professor of ecosystem ecology. “The severe drought that affected much of New England during the summer of 2016 served as first glimpse of what such a future climate may look like.”

Asbjornsen will discuss the preliminary results of her research project at the NH Agricultural Experiment Station education session “Thirsty Trees: How the 2016 Drought Impacted New Hampshire’s Forests” Friday, Feb. 17, 2017, from 1-3:30 p.m. in the Stark Room of the Radisson Hotel, 700 Elm Street, Manchester. The session is part of the 2017 NH Farm and Forest Exposition.

Asbjornsen and her team are trying to understand the impact of drought on New Hampshire’s forests, and the potential impact on the state such as water resources; the production of timber, maple syrup, and other forest products; flood mitigation; and recreational opportunities. According to the NH Division of Forests and Lands, New Hampshire is nearly 84 percent forested, and the forest’s direct impact on the economy of the state is $2.26 billion annually.

UNH scientists conducted research at three different sites in New Hampshire: the UNH Thompson Farm in Durham, the UNH Organic Dairy Research Farm in Lee, and the Hubbard Brook Experimental Forest in the White Mountains. They found that during the height of the drought in late August and early September, white pine, hemlock, and red oak trees experienced severe moisture stress, as indicated by the almost complete cessation of water uptake for a period of several days. However, red oak exhibited greater drought tolerance, as indicated by its ability to continue photosynthesizing even when soils were very dry.

“We also observed that the forests in southern New Hampshire were more strongly affected by the 2016 summer drought than the forests in the White Mountains,” Asbjornsen said.

This material is based upon work supported by the NH Agricultural Experiment Station, through joint funding of the National Institute of Food and Agriculture, U.S. Department of Agriculture, under award number 1003450, and the state of New Hampshire. For more information on this project, visithttp://www.ecohydro.sr.unh.edu/.