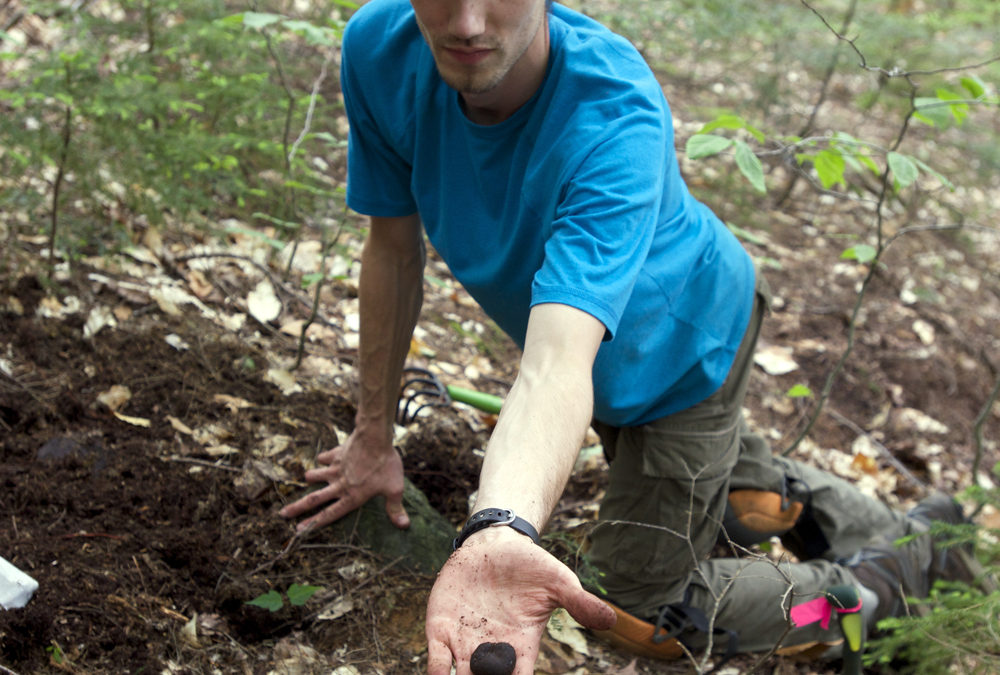 From UNH News Service: University of New Hampshire researchers with the NH Agricultural Experiment Station have identified and described five new truffle species, including two that have been found only in New Hampshire.Although these “deer truffles” are not considered the prized gourmet edibles, they are a key food source for animals and play an important role in forest health.

Despite the importance of truffles, which are the fruiting bodies of mycorrhizal fungi, scientists lack basic information about them in New England, including what species occur in the region. “Mycorrhizal fungi are key components to forests, and a high diversity helps maintain forest health. These fungi form a symbiotic relationship with tree roots and supply trees with water and nutrients and, in exchange, trees supply the fungi with sugars,” said Ryan Stephens, a doctoral student in natural resources and the environment at UNH.

Stephens works with NH Agricultural Experiment Station researcher Dr. Rebecca Rowe, assistant professor of wildlife and conservation biology, who was the principal investigator on this project. Stephens and Rowe partnered with Dr. Michael Castellano of the U.S. Forest Service on this project.

The five new species of truffles were found in the Bartlett Experimental Forest where the research took place and are members of the genus Elaphomyces. They are E. americanus, E. bartlettii, E. macrosporus, E. oreoides, and E. remickii. The two species that have been found only in New Hampshire are E. remickii, which is named after Tyler Remick, a UNH undergraduate who helped collect the truffles as part of his honors thesis, and E. bartlettii, which is named after Bartlett Experimental Forest. Additionally, the scientists named E. oreoides after Oreo cookies because when cut in half, it has a dark/light/dark pattern similar to an Oreo cookie and has a sweet odor. Elaphomyces americanus, E. macrosporus, and E. oreoides are distributed widely in eastern North America, but until now have not been formally described by scientists.

Almost all New England tree species require mycorrhizal fungi for growth and establishment, but the ability of these fungi to colonize new areas is limited because they occur underground. Fungi disperse to new areas by producing fruiting bodies that may be above ground (mushrooms) or below ground (truffles). Unlike mushrooms, which disperse spores through the wind, truffles require animals to excavate them, consume the edible portion that contains microscopic spores, and disperse these spores through scat.

“Because truffles fruit underground, they are difficult to observe compared to mushrooms. As a result, truffle diversity in New England is poorly documented. We are trying to better understand which truffle species occur in the region and the factors that structure their distribution and abundance. Ultimately, this information is necessary for unraveling the complex interactions among truffles, animals, and trees that help keep our forests healthy,” Stephens said.

Going forward, researchers want to investigate the ecology of these species to determine how abundant they are, what environmental characteristics they are associated with, and how small mammals help mediate their dispersal.

This material is based upon work supported by the NH Agricultural Experiment Station, through joint funding of the National Institute of Food and Agriculture, U.S. Department of Agriculture, under award numbers 0229197 and 1006881, and the state of New Hampshire. The North American Truffling Society also supported this research. This research is presented in IMA Fungus in the article “Elaphomyces species (Elaphomycetaceae, Eurotiales) from Bartlett Experimental Forest, New Hampshire, USA.”