Coal and Power, II: As auction of Bow power plant nears, could it switch from coal to wood? 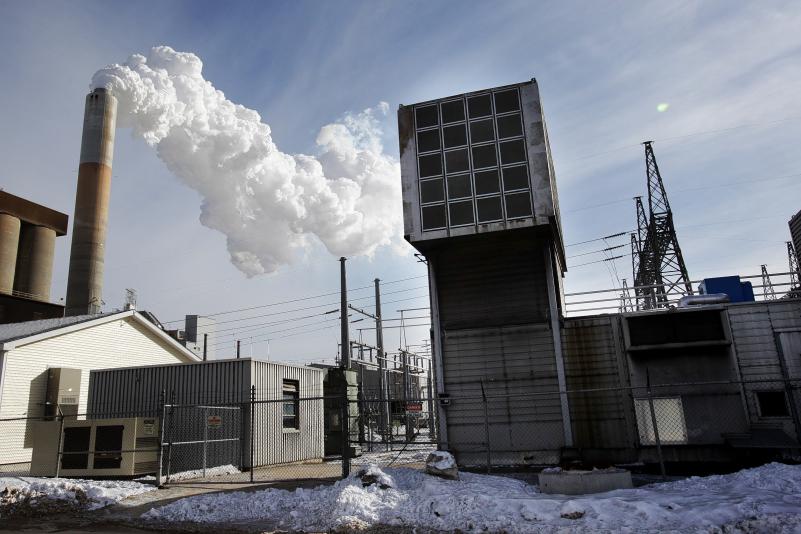 One of the two combustion turbines at Merrimack Station in Bow, is shown in January 2014. It uses aviation fuel to provide quick-starting backup power when the grid is stressed. (ANDREA MORALES / Monitor staff)

One of the big questions regarding energy in New Hampshire at the moment is the pending sale of more than a dozen power plants still owned by our utility, Eversource, including a large coal-fired plant in the town of Bow, just south of Concord. That power plant came up in a story in the Monitor yesterday about a separate issue, the fight between Bow and Eversource about how much it should be taxed (here’s that story), and it reminded me of a question that I tackled last year: Could we switch the plant to burning wood instead of coal?

Here’s a column I wrote about the issue back in November 2015, with a few tweaks:

Speaking as somebody who lived for two years in Southwest Virginia, I can testify that coal is filthy stuff. It’s filthy when it burns, but it’s also filthy to dig up, filthy to process, filthy to transport, and it leaves behind filth in the ground, the water, the air and everybody’s lungs.

Coal made the Industrial Revolution possible, thank you very much, but we’ve outgrown it. Which leads us to Merrimack Station in Bow, the state’s biggest coal-fired power plant.

Merrimack Station is an efficient powerhouse of an electricity generator, providing power on demand in a way that wind and solar can’t, firing up whenever we need to top off the grid with fresh electrons.

Its 439 megawatts of capability have become even more important to New England in recent years, what with the departure of other coal-fired plants, notably the Salem Harbor and Mount Tom plants in Massachusetts, and the Vermont Yankee and (soon) Pilgrim nuclear power plants.

But Merrimack Station’s future is up in the air thanks to the power system’s move toward less disgusting fuels. Since 2010, nearly one-third of the U.S. coal fleet has shut or has planned to shut, according to reports, which is the main reason that carbon pollution from the electric sector is projected to be lower than any time since 1995.

Eversource is going to sell it, in an auction that will take place August 2017, as New Hampshire finishes its long-delayed move away from the old way of structuring our utilities. Now’s the time to decide on its future.

But closing Merrimack Station would cause a lot of problems for New England’s grid, not to mention the roughly 100 people who work there and the town of Bow, which depends on its property taxes. Can we keep it operating?

Here’s my idea: Make it burn locally sourced wood instead of coal.

Eversource (in its PSNH days) did just this in 2006 at one of the three 50-megawatt units at Schiller Station in Portsmouth, which continues to burn chips today. Many coal-to-wood power plant conversions have happened in this country and overseas. Instead of spending money on coal, we’ll give money to New England wood-product companies, and we’ll stop contributing to long-term climate change. Brilliant, right? Only problem: It won’t work.

“You and I could create a scenario where this works very well, but if we tried to take it to the market, it would fall apart,” said Eric Kingsley, a partner at Innovative Natural Resource Solutions in Antrim, when I ran my scenario past him.

Part of the issue is technical, he explained.

Merrimack Station is a pulverized coal plant. The coal is crushed into a powder and sprayed into the furnace. Schiller has stoker grate technology in which coal is put in the plant and burned (if I may simplify). Schiller Station can burn wood chips and certain other wood debris. Merrimack Station, however, would have to burn compressed wood that could be pulverized, meaning pellets.

“It’s like the pellets you buy in a bag at Home Depot. But it would be a huge bag,” Kingsley said.

Doing a “very back-of-envelope calculation,” Kingley estimated that turning just 10 percent of Merrimack Station’s output into wood (it’s common for power plants to burn both coal and wood at the same time) would require some 75,000 tons of pellets a year. (NOTE: This was in 2015; numbers may have changed)

The state’s major pellet producer, New England Wood Pellet in Jaffrey, makes about 100,000 tons of pellets a year, so converting just a small part of Merrimack Station would basically use up all of the output, much to the irritation of its other customers.

So we’d have to import pellets, lots and lots of pellets.

“The bigger plants in Europe and Ontario have very long supply chains. They get their wood pellets delivered in bulk, in tanker ships or via rail,” said Kingsley.

That problems can be overcome, although it would be hard. The real deal-killer, Kinglsey said, is financial.

“Biomass stand-alone electric plants rely on REC certificates,” Kinglsey said, referring to Renewable Energy Certificates, which are given to non-fossil fuel and non-nuclear plants as a production incentive. RECs recognize the environmental benefits of clean energy and can be thought of as a reverse tax: Rather than putting a negative value on dirty power, it puts a positive value on clean generation.

RECs can be bought and sold and have proved a valuable tool in developing renewable energy industry, but that means their value is a function of supply and demand. Too many in the market at once drives down the value.

“In New Hampshire, there isn’t enough space in that market, for the next five years or so, to accommodate something like co-firing at Merrimack. They would all go to it, which would swamp the market and make them worthless for everyone,” he said.

As a result, nobody would finance the conversion, he said.

A more likely scenario is to convert Merrimack Station into a natural gas-fired plant using a pipeline nearby. Liquid fuels are already part of its mix, since the site has two 20-megawatt “peaker plants” which burn jet fuel to very quickly add power to the grid when shortages loom, and Merrimack Station itself burned oil before that got too expensive in the 1980s.

The Salem Harbor coal-fired plant is converting to gas at a cost of (gulp) $1 billion, while some folks are talking about turning the shut Vermont Yankee into a natural gas power plant, although that faces a lack of pipelines. (NOTE: Since I wrote this, that idea has died because the pipeline expansion plan died due to financing problems.)

In short, it seems my idea of turning Merrimack Station into the source of livelihood for New Hampshire lumberjacks amid sustainable North County forests is woefully naive. We should continue to develop biomass energy to make use of a resource that Northern New England possesses in spades, but reality tends to be a lot more difficult than it looks from afar.