What if the Hurricane of 1938 hit today? 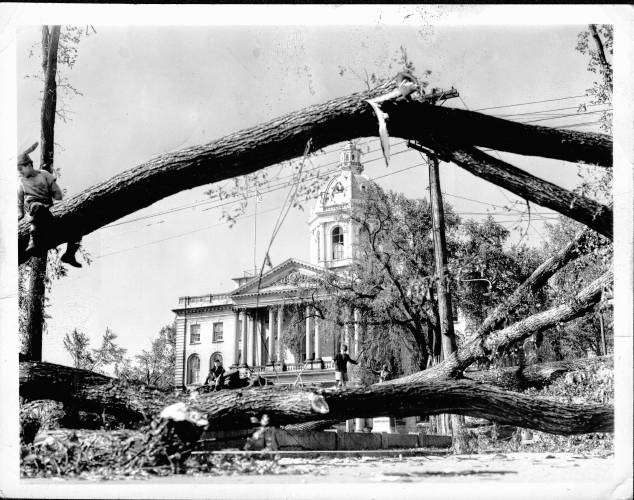 Children play on the downed trees in front of the State House after the Hurrican of 1938 came through.

The worst hurricane in New England history unleashed a devastating combination of wind and water 79 years ago, and with hurricanes ravaging the southeast U.S. and the Caribbean, it’s hard not to wonder what would happen if that storm returned today.

Frank Magilligan of Dartmouth can help you picture it: “Imagine a bigger, windier, slower-moving Irene.”

You remember Hurricane Irene, which moved up the Connecticut River valley in late August of 2011 after doing damage along the Eastern Seaboard.

Even though it had been downgraded to a tropical storm by the time it arrived, Irene rampaged through Vermont, killing six people, cutting off all access to 13 separate communities, and causing tens of millions of dollars, worth of damage to buildings, roads and the power system, some of which was not fully repaired for years.

New Hampshire was much less affected because of the way hurricanes work. Since hurricanes change as they interact with the jet stream in the Northeast, and produce much more rainfall on the western side of the storm – in Irene’s case, on the Vermont side. Almost all of the damage was caused by flooding rather than high winds.

New Hampshire wasn’t so lucky in the Hurricane of ’38, which happened before these storms were given names. It moved up through the state on Sept. 21 after damaging Long Island, Connecticut and Massachusetts. We were hit hard.

Overall, said Magilligan, a geographer and flood specialist, the Hurricane of 1938 and Irene dumped similar amounts of rain – between 7 and 10 inches in most locations, often within just a few hours.

That isn’t much compared to what Hurricane Harvey did to Houston last month, dumping up to 50 inches of rain, but our hills and narrow valleys channel the water, producing much more damage from a smaller amount of rain than happens in flat territories like those in south Texas.

The hurricane certainly produced intense flooding in Concord. The Concord Historical Society’s history “Crosscurrents of Change” quotes an Eastman Street resident who talked about people trapped on roofs by flood waters so high that his “dining room table had floated out of a broken window and onto the street.”

The real damage that it did here came from high winds, which were measured at 120 mph in Massachusetts as the fast-moving storm crossed the state line. Irene, by contrast, had winds of 75 mph or less when it got here.

A least 1,000 trees were felled throughout Concord in 1938, so many that a sawmill was built in Rollins Park to process the lumber. Around the state, sawmills couldn’t handle so many fallen trees at once, and to preserve the value of this lumber, many logs were chained together and sunk into ponds to prevent rot. Turkey Pond was one of those ponds, as a state historical marker reminds us today.

How much damage would the Hurricane of 1938 cause today? Estimating that figure is partly a function of climate and weather but also a function of what’s on the ground. The last eight decades have put a lot more buildings, people and other infrastructure in harm’s way of flooding and damage from high winds.

A 2008 study by the California firm Risk Management Solutions estimated the damage that would occur if the 1938 hurricane came through New England today.

“Insured losses from wind, storm surge, and flooding would total approximately $40 billion to $55 billion, including losses to both the private insurance market and those policies covered under the National Flood Insurance Program,” it said.

Part of the complication is climate change, which has altered weather patterns in ways that are hard to predict. For example, Magilligan said Irene’s flooding was so serious partly because the storm arrived after a particularly wet month.

“The soils were already saturated. They couldn’t absorb more,” he said. “When that happens, the table is set, the system is poised, so that when a big one happens, it has more impact. … When Irene hit, there was nowhere for the water to go except downslope.”

One of the effects of the warming climate is that wet months are becoming more common, due to an increase in extreme precipitation. That makes it more likely that a hurricane will hit at a time when the ground can’t absorb much rain through a process known as infiltration.

“The soils are getting more saturated during summer. … Near-saturated systems tend to be more common than 40, 50 years ago, so when these storms hit, there’s very little room left for infiltration,” Magilligan said.

He also pointed to the region’s aging infrastructure, which has grown more vulnerable to flood stress.

“In the U.S., a lot of the dams, a lot of the culverts, a lot of the roads are old, out-of-date and probably under-designed to handle increases in stream flow that we’ve been experiencing, even without a hurricane,” he said.

A big flood event has the potential to overwhelm some of the many small, half-forgotten dams on New Hampshire streams – “the 200-year-old mill dams that dot the landscape,” in Magilligan’s phrase – causing a potential cascade effect in which one dam fails, sending a surge of water downstream that overwhelms the next dam.

While it’s hard to say when, or even whether, we’ll have another Hurricane of 1938, Magilligan points to two other hurricanes that produced even more flooding: A hurricane in 1927, which produced the highest stream-gauge reading in Vermont history, and the storm of 1936, a combination of rain and melting snow that according to “Crosscurrents of History” flooded 300 homes in Concord, trapping people for so long that “a light airplane transported food from Concord airport to a field off Clinton Street.”

On the other hand, since 1938 a number of flood control dams have been built in New Hampshire and Vermont, which should temper the result of any hurricane – although Magilligan notes that these are usually aimed at reducing flooding downstream along major rivers like the Merrimack and Connecticut, rather than in localities along the small streams near those dams.