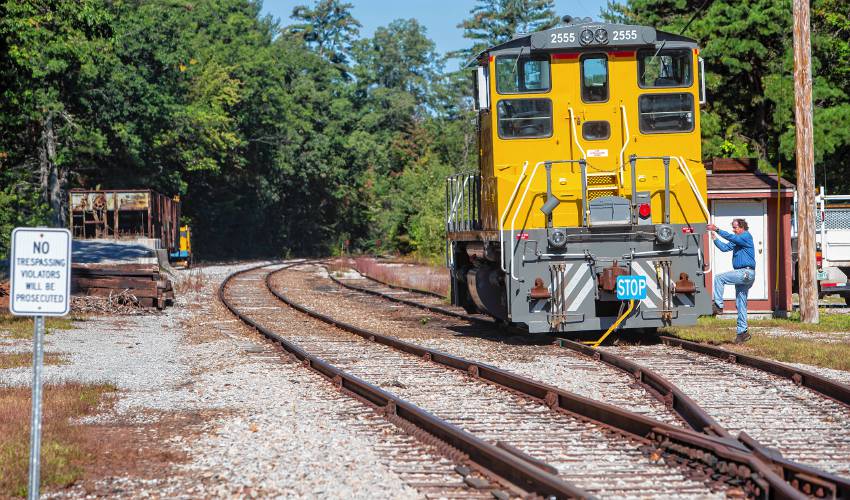 If you want a lesson on why running the state’s oldest short-line railroad is tough business, consider the 1994 Retsoff Salt Mine failure, when a small earthquake flooded a mine in western New York State that had been producing road salt for a century.

Why does a train running between Concord and Lincoln care about a natural disaster 300 miles away?

“International Salt, that was our biggest customer. When we took over, we ran 800 cars (annually), and it went up 1,200. Then the mine collapsed and flooded so boom, bam, there was over half our traffic gone,” said Peter Dearness, president of the private New England Southern Railroad, which is celebrating its 35th anniversary this month.

Or consider the housing recession of the 1990s. “The condominium bust hit and I lost three of the five lumber companies on our line,” Dearness recalled.

Or the long, slow decline of paper mills. Hauling material to and from a mill in Lincoln was a big part of New England Southern’s business, but the mill has closed and these days the bright-yellow locomotive never runs north of Tilton, delivering slurry to the railroad’s last major customer, a specialty paper mill run by 3M Corp.

New England Southern will celebrate its latest anniversary by releasing the first volume of its history. Dearness says the company is holding on, making money in most years because it has cut costs to the bone, but the future is not necessarily secure.

He has hopes for Northern Pass, the controversial electric transmission project that would need a lot of heavy equipment hauled north, and for a contract to move National Guard equipment. Neither is guaranteed, however, so he’s also talking to groups that own other short-line railroads about a possible sale.

“We really need to bring in fresh blood and investment,” said Dearness “Railroading in New England is tough.”

It’s easy to overlook small railroads like Southern New England. It has no office or buildings – Karl Dearness, Peter’s son and the railroad’s only other full-time employee, says he “drives my desk” using cellphones and wireless internet to stay connected – and he parks its only engine on an open siding near Exit 19 off Interstate 93 in Canterbury. It runs no passenger service since a short-lived tourist operation known as the Winnipesaukee railroad ended in the mid-1980s. And it runs so little freight service that it almost never blocks traffic on the nine road crossings that it oversees.

In fact, even though it runs right next to the Monitor building, this newspaper has more than once misidentified it as Pan Am Railways, the state’s largest railroad company.

The line is more than a century old but its modern history dates back to the dark days of the 1970s, when regional giant Boston and Maine went bankrupt and was abandoning its less-used lines. New Hampshire state government bought several of these lines to keep them open, including 73 miles stretching north from Concord, and leased them to private firms.

In 1982, Peter Dearness, an experienced railroad man, won the contract for the newly created New England Southern, which he named in anticipation of also operating in western Massachusetts. The Bay State plans fell through, however, so the slightly misleading name came to be in central New Hampshire, with its NES acronym turned into the nickname “Nessie,” complete with a Loch Ness-like monster as mascot.

The launch drew attention, with Gov. Hugh Gallen showing up for the inaugural trip, because it was the first time the state had purchased a rail line. These days there are 443 miles of active rail line in New Hampshire, about half owned by several private companies. The state owns 202 miles, including the line used by New England Southern.

Things went well for years. They won a contract from Pan Am – the successor to Gilford, which bought most of Boston and Maine’s lines – to operate as far south as Manchester, and at peak the firm had a dozen major clients and employed 22 full-time staff, running more than 2,400 yearly carloads hauling supplies ranging from cattle feed to utility poles, scrap metal to paper, chemicals to slurry.

Railroads have one huge advantage over trucks when it comes to hauling freight and one huge disadvantage.

The advantage is efficiency: A train can carry at least three times as much freight using the same amount of fuel as trucks, which pays off for large amounts of heavy material. That’s why, for example, coal-fired power plants usually have rail lines leading to them: Shipping all that coal with trucks would cost a fortune.

The disadvantage is inflexibility. Imagine if a trucker hauling material to New York had to get permission from parts of New Hampshire, plus Massachusetts, plus Connecticut before he could travel on the highways. That’s roughly what has to happen if you’re talking about long-distance shipping with railroads over lines controlled by multiple entities, which explains why trucks can under-bid railroads on most jobs.

“It’s really hard in New England, because we’re small and the Interstate system is so pervasive throughout New England,” Dearness said. “Railroading is just so damn complex!”

Adding to the strain is the way the region’s shift to a service economy has reduced the need for long-haul freight, while making a living by hauling tourists around is very difficult.

“It’s a seasonal business, feast or famine,” said Karl Dearness, Peter’s son and the only other full-time employee. His brother Kris had the job of mechanical and track supervisor for many years but has taken work out west as the family railroad contracted. “Up here doesn’t seem to be any balance – there’s no industry.”

New England Southern’s biggest recent blow came from Pan Am, which after a court fight in 2008 took back control of the line between Manchester and Concord, and with it most of the line’s industrial customers.

To top everything off, on Feb. 9, 2011, Peter Dearness had sold a locomotive and was driving it south. He had just crossed the Merrimack River rail bridge alongside Brochu Nursery when he noticed snow on the line.

“I had just started to throttle up – luckily, I had put a 5 mph restriction on the bridge because of the pier being rebuilt. If I hadn’t I might not be talking to you. If I had had cars behind me, I definitely wouldn’t be talking to you,” he said.

“The snowmobiles were using the track, which they aren’t supposed to do, and when they got off the bridge they went up the field to the Northern Line. They had piled up snow and it had become ice,” he said. “All you need is one wheel in the flangeway going up, the others are going to follow. I hit that, felt it lurch; I knew I was going to derail.”

The engine fell off the track and rolled. Dearness was hurt but not too badly, although he says, “I still don’t have any feeling from my knee to my hip.” Insurance covered mostly, but not all, of the cost.

Even though New England Southern Railroad is small and quiet, there’s a lot of work in keeping a line open.

It has nine road crossings, each of which must be inspected at least every month and must be repaired when they’re hit by cars or struck by lightning – something that happens surprisingly often.

Then there are the rails themselves. Karl Dearness estimates that each year he replaces about 750 of the wooden ties that hold up the rails. On what is known as a Class 2 track like this, with top speed of 25 mph, there are roughly 1,800 ties in every mile.

The work he does shows how well rail lines hold up, he said.

“I’m pulling out ties from 1933,” he said. “You can tell because of date nails – nails that have the date stamped on them. They used those up through World War II.”

“We’re rolling on stuff that’s older than me and my father put together, and it’s still good,” he said.

That good condition is one of the things that New Hampshire railroads have going for them, said Louis Barker, railroad planner for the state Department of Transportation.

“Our rail operators have been excellent stewards of the state property – they take it very seriously, taking care of the property,” said Barker.

He says he’s confident in the future of the state’s four short-line freight lines – in Coos County, Lebanon and Milford as well as here – and the Conway Scenic passenger line. The number of short-line railroads in the country has actually grown in the past decade, serving specific markets and customers. “I’m optimistic,” he said.

As for New England Southern, it’s not clear that it will be here in the same form for another 35 years, but not for lack of trying.

“We are a company that had to react quickly to survive. We’ll keep going,” said Dearness.